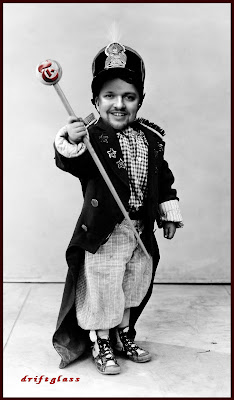 Between bong hits in the Andrew Sullivan Memorial True Conservative Dorm Room and Fanciful Speculatarium, the very-nearly always wrong Ross Douthat reposed on medium-sized pile of money, peered into the cracked and wine-dappled crystal ball he borrowed from Peggy Noonan and speculated about History and The Future.


But with that proviso, here are a few guesses as to how [President Obama's] legacy will ultimately be judged...

And then, suddenly, the bong breaks and the crystal ball falls, and down comes Ross Douthat, navel and all.

Because for all the sawdust and moonbeams and navel-gazing, at this moment in history the single most important task for trifling Conservative hacks with outsized megaphones like Mr. Douthat is to hang the blame for the Rise of The Bastard President somewhere far, far away from themselves. Somewhere far, far away from the sprawling, multi-media Conservative lie factory in which Mr. Douthat serves as a medium-sized cog.  The sprawling, multi-media Conservative lie factory which created a political breeding ground for The Bastard President by building a Republican base that was malignantly ignorant enough --

#morningjoe Jimmy Kimmel asked ppl if they liked Obamacare or ACA & they didn't know that they're the same thing pic.twitter.com/Q0BCRO6fzH
— vlh (@coton_luver) January 17, 2017

-- to fling themselves into the arms of a gibbering beast who sold them a supersized version of the same grotesque fairy tale that the sprawling, multi-media Conservative lie factory has been telling them for years -- that their paranoia is actually patriotism and their ignorance and bigotry is a mark of special grace.

And thus Mr. Douthat rolls out of his New York Times hammock and straight into the important business of blaming President Obama and his liberals cult (hey, I finally made it into the NYT!) for the Rise of the Bastard President

Not that this will prevent him from being a liberal icon, years or generations hence. If John F. Kennedy’s blundering imperilment of world peace was buried under hagiography, there will be a similar forgetting spread over Obama’s foreign policy setbacks. As the first black president, the politician who passed health care reform and the man who personally embodied upper-class liberalism’s cosmopolitan self-image, he will almost certainly regain, in what is sure to be an active post-presidency, some of the cult that surrounded him during his ascent.
...


But it is precisely this once-and-future cult that’s crucial to understanding Obama’s greatest failure, and the part he played in delivering us to Trumpism...

And now, boys and girls, we are well and truly off to the races.  Because it wasn't the sprawling, multi-media Conservative lie factory which Mr. Douthat serves so obediently that dumbed-down and angered up the wingnuts to the point of voting the country off a cliff.  No, it was President "transformational-bordering-on-messianic" style and embrace of "the imperial presidency" which created the "perfervid fears" within the widdle hearts of Real Murricans.

The fears helped give us both the zeal of the Tea Party and the alienation of the Trumpistas.

Mr. Douthat, put down the bong for two minutes and heed to your betters. As certain dirty hippies have been saying since 2009,  There. Is. No. Tea. Party.

There never was a Tea Party.

There was only ever a rebranding scam for gutless Republicans base voters who were desperate to get on with the important business of hating the first black president because deficits! and czars!  and tyranny!  and stuff! before he had even unpacked...

... without having to answer any tricky questions about why they had spent the previous eight years cheering on President Dumbass as he did exactly those things that they had suddenly decided were insuperably evil.

So much easier to put on a stupid hat, wave a little Koch Brothers funded flag, step into the Bush-Off Machine and pop out the other side pretending that you'd never even heard of George W. Bush...especially since America's major media outlets were so damned eager to aid and abet that Big Lie.

I guess the older kids are not sharing their communiques from True Conservative Central Command with support staff like Mr. Douthat.  Sad!

Of course being a loyal pray-pay-and-obey member of the Beltway's High and Holy Cult of Both Siderism, Mr. Douthat is contractually obligated to briefly double-back and try to soften his vile "blame Obama" claptrap with a dose of equally idiotic "blame everybody"claptrap:


I would blame a lot of people — Republican leaders and conservative media personalities and the liberal cultural establishment and Hillary Clinton’s campaign team and Angela Merkel and more — for Trump’s rise more than I would blame Obama.


But I still suspect that the Trumpening might have been prevented had Obama promised less grandly, eschewed imperial temptations when stymied in his ambitions, and dressed his technocratic liberalism in less arc-of-history nonsense.

See, if only President Obama had been more flexible, probably none of this woulda happened!

If only President Obama woulda been more like, say, Bill Clinton --

-- probably everyone woulda gotten along fine!


Surely under that scenario,  Mr. Douthat's Republican Party would never have devolved into a horde of hateful, deluded scumbags addicted to political demagogues and Conservative media liars (from the NYT in December of 1994):

BALTIMORE, Dec. 10— To all the advice for the new Republicans coming to Congress, add this from Rush Limbaugh: A hostile press corps lurks inside the Beltway.


"You will never ever be their friends," the talk-show host warned most of the 73 Republican freshmen at a dinner here tonight. "They don't want to be your friends. Some female reporter will come up to one of you and start batting her eyes and ask you to go to lunch. And you'll think, 'Wow! I'm only a freshman. Cokie Roberts wants to take me to lunch. I've really made it!' " The audience laughed.


The freshman class, which included not a single "femi-Nazi," one of Mr. Limbaugh's favorite epithets for supporters of women's rights, whooped and applauded, proving itself one big fan club of the man it believes was primarily responsible for the Republican avalanche in November...

Surely under that scenario,  Mr. Douthat's Republican Party would never have turned into a mob of seditious goons who would shut the entire government down in a fit of pique: 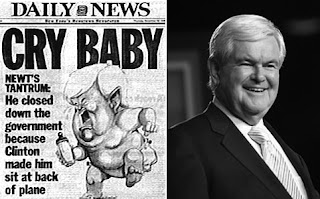 Surely under that scenario,  Mr. Douthat's Republican Party would never have morphed into gang of rage-drunk thugs who would use any means at their disposal to cripple the Democratic president's ability to simply govern as he was elected to do:

Yes, of only President Obama had been more like Bill Clinton, then surely his successor would not have been a wildly unqualified dolt who lost the popular vote but "won" anyway thanks to our electoral process being tampered with by people I would not trust to cat-sit for five minutes (from New York Magazine, in June of 2012):

The general topic of wildly partisan Supreme Court rulings is on everybody’s mind right now for some reason. The Washington Examiner’s Tim Carney wants everybody to know that the Supreme Court really, truly did not hand the presidential election to George W. Bush. “You can disagree with the ruling in Bush v. Gore,” writes Carney, “but you can’t honestly argue that it decided the election.”

Well, yes, you can. In fact we know nearly for certain that the recount stopped by the Supreme Court would have given Gore the lead. (Of course, it’s entirely possible that the Republican-controlled Florida legislature would have simply overridden the results of the count and handed the state to Bush, as it threatened to do.) But Carney is repeating a common misconception.
...

Now, the actual effect of the recount is obviously something of a side issue when assessing the actions of the Court. Nobody knew the outcome of the recount, only that it threatened to make Al Gore president, and stopping it would guarantee Bush’s victory. That is the environment in which five Republican-appointed justices essentially invented a one-time-only ruling to stop the recount...

And obviously under that scenario,  Mr. Douthat's Republican Party would never have gotten the stone cold Orwellian nerve to launch a massive, multi-media Memory Hole campaign to pretend that none of this ever happened.

See, this is the problem when you hire creatures like Ross Douthat who dare not remember the past as it actually happened to Opine Gassily In Public.  Your paper ends up looking like the people who run it are liars.

So glad you wrote that! Hey, NY Times, fire Douthat and hire Driftglass!!!

Sorry, but I blew out a tire coming around the turn where Angela Merkel is responsible for Trump or any other damn thing in America. How many Trump voters knew who she was in October? Somewhere between a phone booth's occupancy and an Applebees, which I hear has a great salad bar.

In a way, the NYT has selected to hire what they consider to be the best representation of a conservative colonoscopy to display the brightest light where the sun doesn't shine.

It is sort of like, when the FOX Supremacy channel finds an actor to place on their show to be the liberal strawman.
But the FOX does it to invoke pinata smacking for their consumers and not for diversity to get more viewers to advertise to.
As for the
Taxed Enough Already" party. Who does nothing but spend tax dollars.
You're correct about they are simply a mind numbing rebranding to relieve the horrors of what their republicans failed .
But, the Koch's funding to invite the John Birch Society back in the mainstream after having been shunned. is still a rebranding.

What rebranding might we see after Trump makes us so great again?

The "blood sucking conservative vampire Brotherhood"?
laugh if you must, T-Potter worked as far as memory regression
And something from which they could unite and hate from.

Clearly the memo sent to all Both Siderist media conservatives is to change history and make the last 8 years were equal to (and/or slightly worse) than the Bush administration.

For 60 million Americans, I am sure that is already so, but Russ et al.'s job is to make sure the unvoting third of the electorate doesn't' start putting 2 and 2 together when they healthcare costs spike in 6 months.


Adding, the "Trumpist" rebranding, I am sure mentioning that the bills Trump will be signing into law have been on the Republican legislative agenda since Reagan is a fire-able offense.

Thanks for posting the video about David Brock, Driftglass...he was absolutely right when he said, "They did not care....because they were having a devastating effect."

When one looks at the emails and Benghazi and all the anti-Hillary bullshit from 2016 (and yes, sadly, some on the Left were more than willing to swallow that swill too), it looks like Brock was right again.

We should have listened to him then.

"eschewed imperial temptations when stymied in his ambitions, and dressed his technocratic liberalism in less arc-of-history nonsense."

Ross Douthat will make more money this year than I made in the last 15-20 years. For his writing.

I strongly suspect Cheney, Rice & Co. (Teh PNAC Posse) asked/urged Dubya to go Full Franco circa 9/11, & that he told them to get bent & STFU, silver-spoon psychopathy notwithstanding.

Douthat left the razor blade sticking out of the apple a little bit.