David Brooks' High and Holy Church of Both Siderism 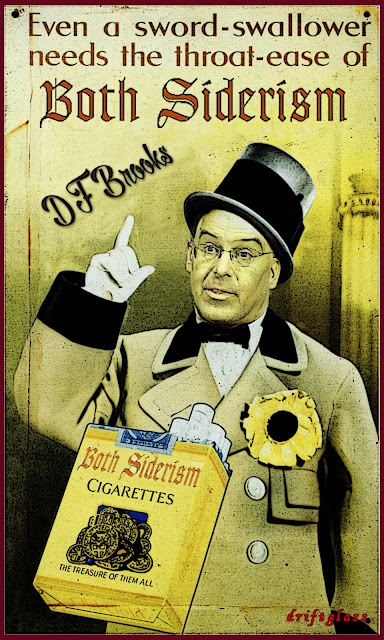 As I have pointed out literally hundreds of times over the past 12 years, New York Times columnist David Brooks would be an otherwise unremarkable and incompetent liar were it not for the fact that he has amassed a mountain of money and a formidable reputation by doing one thing, over and over again, regardless of facts or circumstances:  relentlessly selling the shit out of the Very Big Lie of "Both Sides Do It" that the mainstream media and a small clutch of deluded and terrified oligarchs cling to for dear life.


Out of this single, toxic lie they have built themselves a mighty fortress of delusions -- a "dream palace", if you will -- bulwarked by nothing but the sheer gravitational force of their wealth and their suffocating stranglehold on the American corporate media.   They have made a high and holy Church of Both Siderism, and installed Mr. David Brooks of the New York Times as their pope ( Pope Bias the First, Bishop of the Acela Corridor, aka, Vicar of Both Sides, Successor of the Prince of the Kristols, Supreme Pontiff of the Washington Beltway, Primate of Fake Centrism, Archbishop and Metropolitan of Humility, Sovereign of True Conservatism's City State and Servant of the servants of the Church of Lyin'tology)


As I have long said, come Hell or High Twitter,  left to his own devices. Mr. Brooks will never, ever stop writing the same rancid, ridiculous Both Siderist claptrap over and over again.  However even I, America's Leading Brooksologist, never imagined that David Fucking Brooks could manage without oxygen tanks and Sherpa guides to climb as far up his own ass as he climbed today.

Today Mr. David Fucking Brooks finally out-David Fucking Brooksed himself, and I can only look on in awe at how completely banjaxed all internal guidance and ethical mechanisms at The New York Times must be that they actually pay Mr. Brooks real American money to take such an epic Both Siderist dump on their pages.

And here we go.

First, Mr. Brooks resurrects his old boss at The Weekly Standard back into pages of The New York Times, because nothing says "Hey, fuck you, America!" louder than citing the Wrongest Man In America in your second paragraph:

The Future of the American Center

David Brooks NOV. 29, 2016
...
As Bill Kristol told me, the coming Congress may not look like the recent Congresses, when party-line voting was the rule...

Remember back during the last Republican administration when Bill Kristol was allocated a Wingnut Welfare affirmative action slot at the NYT right next to Mr. Brooks, but then got his ass canned for sucking so bad at his job that even they couldn't stand it anymore?

Then, of course, comes the deliberate and slanderous false equivalence centerpiece of this dog's breakfast, because hey America, fuck you twice!  I'm David Fucking Brooks and I get to say this shit and get paid for it because...reasons!

The most important caucus formation will be in the ideological center. There’s a lot of room between the alt-right and the alt-left, between Trumpian authoritarianism and Sanders socialism.

Then back to Bill Kristol and a Special Surprise Guest to make it all bipartisany!

For example, Bill Kristol and Bill Galston have worked in the White Houses of different parties and had voted for the opposite presidential candidates in every election for four decades. But Donald Trump has reminded them how much they agree on the fundamentals.

The two Bills have now issued a joint statement calling for “a New Center.”...

Because calling this shit-show the "Project For a New America Center" might has clued people into what was actually going on.

By the way, if you've never heard of Bill Galston, you're not alone.  He is basically a lump of left-of-center clay there to make the scales balance so that Mr. David Brooks of The New York Times can pretend this oldest and hoariest of all Beltway fairy tales is a new and vital idea.  But if you want to learn more about Mr. Galston, you could start with this article by David Weigel from 2012:

But the bottle of Don Julio Real which Mr. Brooks has obviously been nursing is down to the backwash, and with only has a scant couple of paragraphs left the crowd holds its collective breathe as wonders, in the space allotted can Mr. David Brooks of The New York Times stick the landing by name-checking the granddaddy of all boutique Beltway Both Siderist scams?

The most active centrist organization, No Labels, began six years ago in opposition to polarized, cutthroat politics. The problem with the group back then was that there was no future to a political movement whose first name is “No.” You have to be for something.

But under the leadership of its undeterrable co-founder, Nancy Jacobson, No Labels has evolved...

Then, for style-points, one more flurry of wretchedly dishonest and dishonorable false equivalence --

The most important caucus formation will be in the ideological center. There’s a lot of room between the alt-right and the alt-left, between Trumpian authoritarianism and Sanders socialism.

-- and then it's back out on the trail for the next leg of Mr. Brooks Confirmation Bias Tour where Mr. Brooks will report back on an unemployed pipe-fitter that Mr. Brooks will meet in Muncie, IN whose Confederate flags and "Trump That Bitch" bumper-stickers are just his way of telling the world that a two-dimensional debate between Monetarist and Keynesians is insufficient to address the four-dimensional realities of a post-industrial but pre-robotic society.

Unfortunately, Mr. Brooks' Centrist Superman is due to leave public office forever in about a month and a half, so darn that really bad timing, eh!

And darn the bad luck that Mr. Brooks just so happens to have chosen to spend his last eight years at The New York Times energetically opposing everything this Centrist Superman has tried to accomplish.


...
But even if you accept this very strange notion of the political alignment in Trump’s Washington, it raises a question Brooks is not prepared to answer. If his objection on the left lies with the “Sanders socialism,” then isn’t there an appealing centrist lying to the right of that? A moderate who favors market-oriented solutions that bring together business and labor, who welcomes empiricism, and is willing to compromise? A politician who has led the Democratic party for the last eight years and, in fact, is still the sitting president of the United States right now?

One might think so. But Brooks spent the last eight years defining the center as something Obama was not. It didn’t matter that Obama supported a health-care plan first devised by Mitt Romney, or a cap-and-trade plan endorsed by John McCain. Brooks nestled himself into the territory between Obama and the angry, no-compromise Republicans who were shutting down government and boycotting all negotiations with the president. If Obama endorsed the policies Brooks preferred, he would simply pretend that Obama had not proposed them. Indeed, one of the most common genres of David Brooks column was a sad lament that neither party would endorse policies that in fact Obama had explicitly and publicly called for...

What a great fair tale by Mr. Brooks. If only pretty much every Republican elected to congress since 2008 wasn't there...

And not an exaggeration.

Thanks for your service to humanity.

I would say "you can't make this shit up" except that that's what DFB does day in, day out. However, this one is really special. It bears about as much relationship to reality as Trump claiming that he lost the popular vote only because millions of illegals voted. We truly have entered the twilight zone of American politics.

"Bill Galston, America's Wrongest Columnist."
Wait, I thought Kristol was wrongest... Oh do they come in a set? To illustrate just how wrong both siderism is, inherently?

Let me tell you something about No Labels that I found out while reading Brooks' repulsive book: For their most recent project, they took a series of policies (grouped together in what they thought Real Americans really cared about), presented them to a pollster, then discarded every one that failed to poll above a particular level with all of the groups they studied.

I won't tell you that these policies are bad - they all that inoffensive, ineffectual centrist spit-shine on them. However, the means they used to decide on them are the very definition of cowardice. These are people who analyze policy not in terms of whether it will be effective but whether it will be popular. It's better to be wrong then to be disliked - there's a message for the kids. And of course Brooks, who argued in said repulsive book that good leaders never make bold decisions because the right answer is always in the middle, fits right in.

2. So, William Kristol is here to save us from the monster partially created by...William Kristol. Isn't this the bad guy's master plan in "The Incredibles?"

3. Because I thought you could use a laugh, this is from Mr. Kristol's No Labels piece that Mr. Brooks linked to: "Accountability is a basic principle of free governments and free societies. *** The people have a right to expect that when powerful individuals are acting without regard to the public good or lack the competence to promote it, they will be held accountable for their mistakes."


4
Banjaxed
An Irish colloquial term meaning one of several things

4) Not functioning correctly
" Can ya give me a jont home mate? Me bleedin' honda civic is banjaxed again "

" Been in the pub all after-noon mate, craic was ninty, but now i'm too banjaxed to drive "
#banjaxed #broken #inebriated #failing #dublin #slang

From the Urban Dictionary- You're Welcome~

Bobo missed that the Overton Window has slid past the the John Birch Society marker. There is a political center dumbass. It is called the Democratic Party.

Nooooooo! Don't encourage him! He loves throwing in words that he knows 99% of his readers don't understand! It's Dennis Miller Syndrome!

All kidding aside, thanks for filling me in.