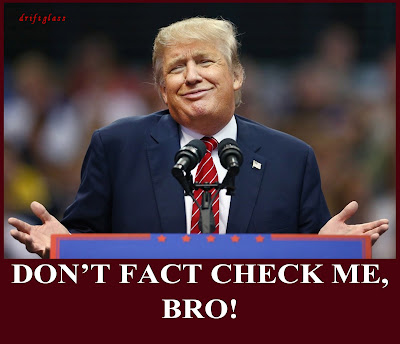 As the honored selection of cable news to be a debate moderator is put on resumes from the folks that are supposedly bringing you factual news (daily).

Because of down sizing and ratings.

Those left to disperse "news", Well;let their own words speak for themselves.

And a long career of not reporting truth (in news) has elevated me to TV News Anchor and now debate moderator.
It is almost like promoting Meatloaf to the U.S. Supreme Court. Because it is such an honor............? For whoom?

"I make liberals mad. Vote for me!"

Maybe Hillary just has to point out that she's all in for Fact Checking where The Donald is not. What's _that_ say about the candidates?

Months ago based on his dealing with Megan Kelly, I naively thought Trump's run would end during the first debate when he'd lose it and call Hillary the c-word on national TV.

Having returned from a week long stint in a "battle ground state" that Hillary is convincingly leading, but the media isn't reporting...I know that he could utterly lose it tonight and it will just be another Republican "You Lie!" moment that will fill Trump's coffers, jump him five points, and the media will counter balance discussing Hillary's outfit choice (they are already taking about podium height).

Bloomberg News just announced they will fact check the debate in real time. Maybe I'll watch after all.

So Mr. Glass, we meet again.

About this fact-checking thing:

1. It's sad that it's gotten to the point where we have to have "fair and balanced" discussions about whether this should even be a thing.
2. It could be said that CNN and MSNBC have finally found themselves in the position of liberal bloggers...having to do fact-checking because the people who should've been doing it all this time haven't. I'm sure you'll disagree with the analogy in terms of severity, but the basic process seems the same.

I'm laying in some of the excellent GH Cretor's popcorn recommended by our host driftglass.

I believe that Clinton has already declared that she's totally in favor of fact-checking. Of course, lying crooked Hillary the criminal can do nothing right. Ergo, the official response is: SO???

This debate'll go ever futher afield from the Joe Biden v. Bible Spice VP debate in 2008, whereby Snowbilly Snooki was more or less declared the winner because she managed, somehow, not to sound like a total moron. Of course, Tundra Trash managed to do that by resolutely refusing to answer any of the debate questions and just babbling out some pre-packaged talking points. The PBS "moderator", Gwen AWFUL, of course, sat there and let her do that.

Trump will pull off something similar, I feel sure, and the media will slavishly declare him the winner by a long-shot, while dissing Clinton for her choice of clothing, coughing too much, and something something Benghazi! Emails! Clinton Foundation!

I can't bear to watch it. I'm leading an urban hike, instead. Much better for my blood pressure, thankyewverymuch.

So, if the moderators corrected Donald Trump's lies in real-time (they won't) would it really matter? Would anything matter at all with anybody thinking of voting for Trump? Probably not.

To support Trump at this point you've had to already swallow so many lies, so much bigotry and nonsense that your gag reflex is non-existent.

So, to sum up, this election will turn solely on whether enough sane people turn out and vote for sanity. Expecting any of those people to be Republicans was always a delusion. This is Pickets' Charge of racism and we have to turn back the assault and beat them down, not debate about whether some of Robert E. Lee's men might possibly be "good people" in other days or other circumstances.

@Cugel: you are 100% correct in that no amount of factual reality will ever penetrate and/or matter to Trump voters (whether of the slavishly devoted or just anyone but Hillary types). It's been made clear that facts and reality have no bearing on conservatives. Once they've made up their minds, it's clear that Trump could, indeed, walk out on 5th Avenue and murder someone in cold blood in front of dozens of tv cameras, and his fans would still vote for him.

The only slight sway Clinton might hold is with those still undecided, and there are some who might just choose not to vote. Clinton is doing huge youth vote outreach, and the debate could have some meaningful outcomes in terms of younger voters and those few remaining older "undecideds."

Driftglass has proven beyond a shadow of a doubt that it's an exercise in futility to attempt to "reach out" to die-hard Republicans. Useless. Facts don't matter. Reality doesn't matter. The safety of our nation doesn't matter. This is Johnny Reb's last stand. Confederacy over the Union; fuck the Yankees; blah de blah.

Good luck to Clinton. Hope she reaches a few hearts and minds tonight.

I'll read through your stuff later, but thought I'd pass this on now...