The Church of Lyin'tology, Ctd. -- UPDATE 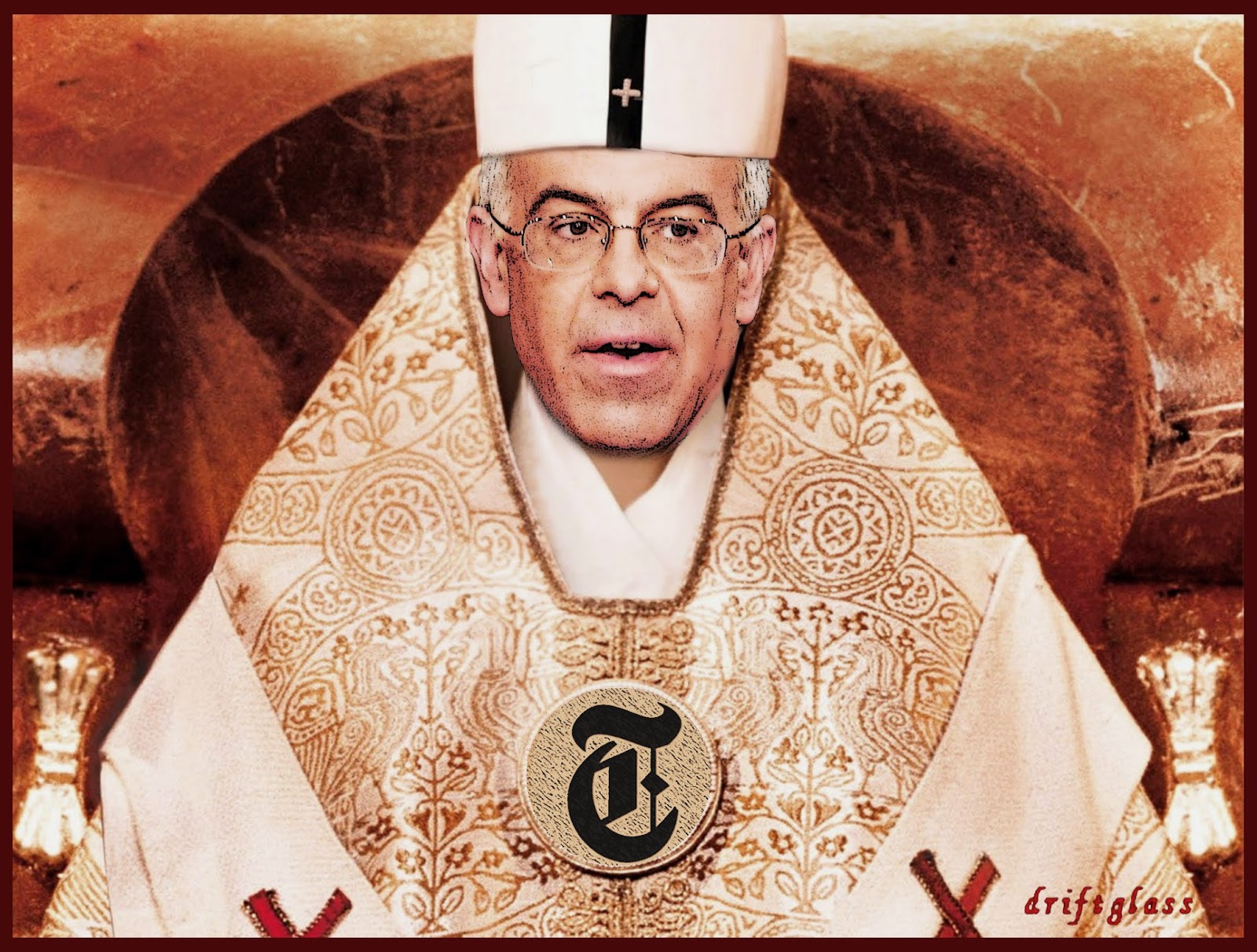 David Brooks decided International Worker's Day would be an excellent day to tell the world what really causes poverty (Spoiler:  According to Mr. Brooks, poverty has nothing to do with lack of money, or community investment, or jobs.  It's not deindustrialization or food deserts or shitty schools.  It's nothing to do with class or race or a war on drugs that long ago became a brand new way of ruining minority lives and communities.)

Twitter went satisfyingly ballistic and articles began pouring from the keyboards of people who could count and/or who had actually met one of The Poors at some point in the last 20 years.

David Brooks Is Not Buying Your Excuses, Poor People.

David Brooks and the Federal Government's $14,000 Per Year Per Poor Person

In the United States it's considered fine to just make crap up when talking about the government, especially when it comes to programs for poor people. That is why Ronald Reagan ran around the country telling people about the welfare queen who drove up to the welfare office every month in her new Cadillac to pick up her check.

David Brooks’ Baltimore column might be his dumbest of the year (We didn’t think it was possible, either)


Is there a greater hack in America than David Fucking Brooks?


Annals of derp: The poverty of poverty studies


...
And, perhaps, there will be even more of this insufferable David Brooks meeping about how this isn't about poverty and systemic abuse and racism, but about people fking on their sofas without the permission of their betters.


Yes. The New York Times Is Toxic. Why Do You Ask?

And while it is rewarding to see one's theories and opinions validated (if not recognized :-) by others, none of this matters much now that Mr. Brooks has transcended mere factual reality and made himself the Pope of his own Church of Lyin'tology.

And just in case you think I'm kidding about the quasi-religious shield-wall of moralizing catch phrases and revisionist history Mr. Brooks is building so that he and his cronies can continue right on running their same old scams, on the very same day that Mr. Brooks once again used his incredibly privileged and powerful position at the New York Times to take the truth out The Poors into the deep, deep woods and shoot it in the head three or four times...

...not one... not two... but three well-synchronized fawning interviews with Mr. Brooks on the subject of his Profound Spiritual Depths and Sensitivities appear in print. There was this embarassing reacharound in the Washington Post:

Interview: David Brooks on sin, Augustine and the state of his soul

This from the Religious News Service:

And slabs of exactly the same interview from RNS which have been ground up and served as a slightly different interview in Sojourners:


Q&A: David Brooks on Character, Sin, and Rumors About His Religious Journey

The astute reader will note that whenever Mr. Brooks lectures gassily and from far, far away about the plight of The Poors, he is never shy about using his amazing moral x-ray vision to penetrate their lives and communities and pronounce judgement on these children of a lesser God.

"You see a lot, Doctor. But are you strong enough to point that high-powered perception at yourself? What about it? Why don't you - why don't you look at yourself and write down what you see? Or maybe you're afraid to."

-- it turns out that Mr. Brooks' own inner life, his own failed marriage and his own motives for all the terrible things he has said and done are none of your fucking business, thank you very much (emphasis added for your spiritual betterment):

Can you talk about the state of your faith?

I’m still not talking about it. I do think it is personal. The book has some self revelatory things. But I try to keep a limit on all aspects of my life. I only go so deep with no specifics because the book is a defense of privacy and reticence. I want to talk in general about my life but not in detail. Some things are so delicate in everybody’s lives, they should only be shared with people who you trust. You do some violence to private emotion and private thought when you reduce it to simplicities of public conversation. I was asked on NPR, and I said everything is so green and fresh, it’s particularly unsettled and particularly fragile.

"You do some violence to private emotion and private thought when you reduce it to simplicities of public conversation."

Said without even a hint of a trace of irony, I'm sure.

Good old Bobo. Whenever I think he can't possibly be less self-aware, he proves me wrong. What a guy.

Privilege is being taught to read the beautiful fresh and green prose of David Brooks. No other American writer possesses the combination of empathy and insight along with the skill to offer timeless presentation of those thoughts...and this quarter sized mole with irregular borders on my arm is nothing.

Throat punch this motherfucker. And kick him a couple of times for good measure. Then prop him up in a char and say, David, now that I have your attention we can begin. I am going to explain to you why you are an asshole..."

I like the link to "Yes. The New York Times Is Toxic. Why Do You Ask?"

At this point I'm so repulsed by DFB that I wish the NYT would fail financially and go out of business. That at least would deprive this insufferable pompous ass of his principal platform. The social harm the NYT does by hosting this parasite surely outweighs any benefit to the public from its continued existence.

In the Denver Post the other day, a gentleman who allegedly works at the welfare office weighed in with a letter to the editor. In which he whined about one of his clients who drives his new Mercedes to the office to pick up his bennies, while another wears a new fur coat, and he has seen (with these two eyes that the grave will soon devour) any number of his clients buying steak and lobster with their food stamps.

So either Zombie Reagan has clawed his way up from the tomb and is penning "Dear Penthouse Forum, I never thought this would happen to me..." letters to the Post or the stories as told by that B list actor have taken on a life of their own. A fifty year life, which is more than some impoverished humans are granted.

In any case, some people clearly hate the poor so much that they will believe any stupid lie about them and force upon them any degradation and humiliation in exchange for every scrap of assistant that society might bestow.

Is "richsplaining" a word yet?

You ever think of doing a Photoshop of Mr. Brooks as Robin Williams' floating head in "The Adventures of Baron Munchausen?" The King of the Moon's head didn't like concrete concerns either.

@Red Hand: He would simply be given another platform. He is too useful to his owners to be denied a platform.

@Smut Clyde: If not, it should be.

Again, that definition I read somewhere: Modern USAmerican "journalism" consists of billionaires hiring millionaires to explain to the middle classes why everything which has gone wrong in their lives is somehow the fault of the poor.

"Again, that definition I read somewhere: Modern USAmerican 'journalism' consists of billionaires hiring millionaires to explain to the middle classes why everything which has gone wrong in their lives is somehow the fault of the poor."

You ever think of doing a Photoshop of Mr. Brooks as Robin Williams' floating head in "The Adventures of Baron Munchausen?"

I imagine that a Phop already exists in the Driftglass archives of Brooks as Peter Cook from "Princess Bridge" (Mawage, that bwessed awangment, that dweam wifin a dweam).

I beg, I implore you to run, not walk and download the excellent podcast This Week In Blackness. A few weeks ago, the host Elon James White, went full Driftglass on Mr. Brooks. This wasn't just our white whining, this was nerdcore militant Blackness taking torches and pitchforks to Brooks' poor-shaming and white-splaining. If there's anyone in the universe who hates Brooks more than Driftglass, it's Mr. White.

It took me a few minutes to find: