Today In "Both Sides Do It": Michael Gerson And The Mushroom Cloud 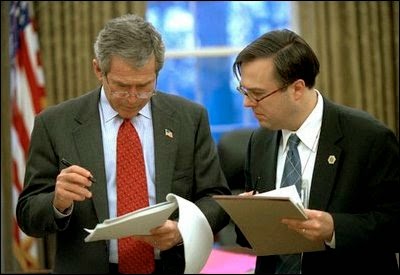 Maybe it was working for Dubya all those years that leached away whatever subtlety* Michael Gerson might have once had.

Or, maybe, as his wiki profile suggests, he was kind of a dick all along:

Gerson proposed the use of a "smoking gun/mushroom cloud" metaphor during a September 5, 2002 meeting of the White House Iraq Group, in an effort to sell the American public on the nuclear dangers posed by Saddam Hussein. According to Newsweek columnist Michael Isikoff, "The original plan had been to place it in an upcoming presidential speech, but WHIG members fancied it so much that when the Times reporters contacted the White House to talk about their upcoming piece [about aluminum tubes], one of them leaked Gerson's phrase — and the administration would soon make maximum use of it."

...
[Gerson's co-speechwriters Matthew] Scully also had this to say about Gerson:

"My most vivid memory of Mike at Starbucks is one I have labored in vain to shake. We were working on a State of the Union address in John’s ( McConnell's) office when suddenly Mike was called away for an unspecified appointment, leaving us to “keep going.” We learned only later, from a chance conversation with his secretary, where he had gone, and it was a piece of Washington self-promotion for the ages: At the precise moment when the State of the Union address was being drafted at the White House by John and me, Mike was off pretending to craft the State of the Union in longhand for the benefit of a reporter."[17]

Whatever the reason, Mr. Gerson clearly felt that his last attempt just two short week ago at a double-delegitimizing bank shot -- casting Ted Cruz as a fringe nut who is definitely not at all representative of Mr. Gerson's sane and reasonable (and wholly imaginary) GOP, and casting Elizabeth Warren as the Lady Liberal Ted Cruz, because Both Sides -- was not up to his former, apocalyptic, sledgehammery standards.


And so this week, from the Bush family retainer whose pen gave the world "a smoking gun in the form of a mushroom cloud", we get this:

Those who judge a Bush-Clinton race to be a tired retread or disturbingly dynastic should consider the more novel and dynamic alternatives. A Warren-Cruz race would be less of an electoral choice than a national trauma. It’s been said that too much clarity darkens.

It has also been said that too much Wingnut Welfare leads to slothful, crappy writing.

Which is not to say that to motivate Michael Gerson to write in a less shamelessly dishonest manner he should be pelted with dog poop whenever he shows his face in public.

Because that would be wrong.

Oh, heck, I'll say it: If pelting Gerson with dog poop whenever he shows his face in public is wrong, I don't want to be right.