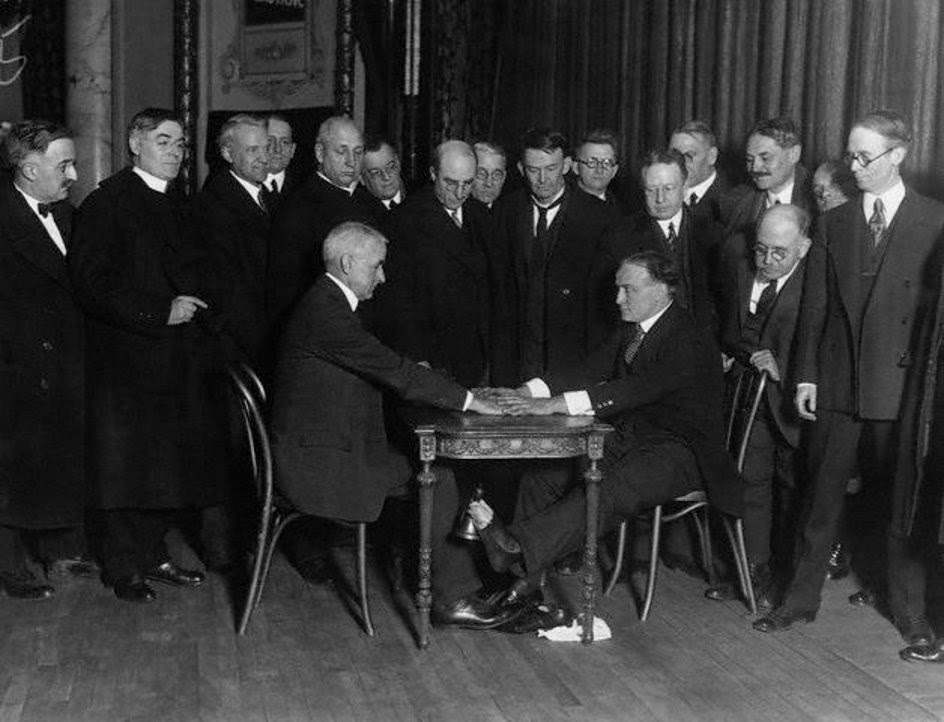 
First, no expense was spared to book a killer opening act:  a rousing stage seance wherein famed political spiritualists attempted to raise the Presidential Prospects of three-time loser Mittens Romney from the dead.

Yea, and many tambourines were shaken and, yea, many spells were incanted and, yea, I suspect at least one jug of Oh Be Joyful was passed around because by the time the keening and wailing really took off, many were swearing that -- yes!, yes! -- they could make out the outlines of a Romney 2016 run hovering in the ectoplasm because -- y'know what!?, y'know what!? -- maybe losing over and over again was the best possible thing that coulda happened to The Mittster!

But the fake medium act did what it was intended to do; warm the table up for the Main Event.  And here is where Wonkette takes up the story:

Every now and then, cable news gets something right. Not often — see, for example, that time CNN reported that the Supreme Court had overturned Obamacare, except it was the opposite of that, or see, for example everything that has ever aired on Fox “News.” But sometimes.

MSNBC had one such rare moment of sobriety in 2012, when it finally (read: belatedly) decided that giving air time to Pat Buchanan, one of the original poster boys for the worst kind of rightwing scum, was not such a good idea because even MSNBC’s president Phil Griffin finally (read: belatedly) cringed so hard at Pat’s blatant racism when, in his latest book, he bemoaned the end of white Christian America. As if Pat’s indisputable despicability hadn’t been on full display for decades, including right there on Griffin’s very own network.

But MSNBC has fallen off the wagon and gone on a major bender, because Pat is back to pimp his newest book, Why I’d Still Get On My Knees And Fellate My Hero Richard Nixon If I Could, and the “Morning Joe” team couldn’t be happier, because they had all the sads and thought it was very wrong when Buchanan was suspended in the first place. Pat was a “friend,” you see, and “a member of the family,” like that crazy racist uncle who sends you illiterate conspiracy theory emails and probably also touched you under the dinner table when you were a kid.
...

The medium may be the message, but in political spiritualism, the medium is also the messenger.

And, as Houdini reminds us, it is also the lowest form of life:

The standard pattern for teabagging types is

Get rabidly excited about the republican presidential nominee

Watch that republican lose or fail

Declare that the republican was not a real conservative.

So the only real way to piss them off is to run someone again, someone that already has the "not a real conservative" label attached.

So Romney nomination talk needs to be encouraged.

MSNBC is not the only patty Buchanan. Comedy Central's Steven Colbert had Patty on as well.
I guess all networks do it?

Colbert to Pat;
do you think Nixon should have destroyed the tapes.

pat;
Yes he should have destroyed the tapes.

The Colbert had John Dean on.

Hohn Dean, No the tapes shold not be destroyed.