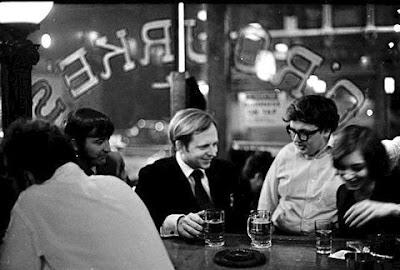 A damn fine writer has passed and we are all a little poorer for it.

Here is some of his good stuff I snuck off the top shelf:

The best damn job in the whole damn world

One of my editors at the Sun-Times once asked me, "Roger, is it true that they used to let reporters smoke at their desks?" This wasn't asked yesterday; it must have been ten years ago. I realized then, although I'm only writing about it now, that a lifestyle had disappeared.

When I entered the business in the autumn of my 16th year, newspapering seemed the most romantic and exciting thing I could possibly do with my life. "But honey," my mom said, "they don't pay them anything." Who cared? It involved knowing what was going on before anyone else did, and putting my byline on top of a story telling it to the world. "Roger Ebert" is only a name. "By Roger Ebert" are the three most magical words in the language, drawing my eye the same way a bulls-eye attracts an arrow.

In the way some kids might be awed by a youth gang, I was awed by admission to the fraternity of newspapers. I adopted the idealism and cynicism of the reporters I met there, spoke like they did, laughed at the same things, felt that I belonged. On Saturday nights about midnight at The News-Gazette, when we put the Sunday paper to bed, we gathered around the city desk, tired, released, and waited for the first papers to be brought upstairs. Ed Borman, the news editor was in the slot; Bill Schmelzle, the city editor, had Saturday nights off. Borman would crack open a six-pack. I tasted beer for the first time. I was a man. My parents, my family, my friends at school, nobody, would ever really understand the fellowship into which I entered. Borman didn't care that I was drinking at 16. We had all put out the paper together. Now we would have a beer.

I went to work for the Chicago Sun-Times in 1966. I walked from the Illinois Central Station up Wabash Avenue, under the L tracks, and saw the building looming on the opposite bank of the Chicago River. A boat was moored at its dock, and a crane was off-loading huge rolls of newsprint. I was assigned a desk in the back row of the city room, in the corner by the window. We shared the floor with the city room of the Chicago Daily News, where Mike Royko occupied the corresponding position.

At about 8 p.m. on New Year's Day of 1967, only two lights on the floor were burning--mine, and Royko's. It was too early for the graveyard shift to come in. Royko walked over to see who else was working. A historic snowstorm was beginning. He asked me how I was getting home. I said I'd take the train. He said he had his old man's Checker car and would drop me at a train station. He had to make a stop at a 24-hour drugstore right where the L crossed North Avenue.

The pharmacist was backed up. "Come on, kid," Royko said. "Let's have a drink at the eye-opener place." It was a bar under the tracks so cramped the bartender could serve everyone without leaving his stool. "Two blackberry brandies and short beers," he said. He told me, "Blackberry brandy is good for hangovers. You never get charged for a beer chaser." I sipped the brandy, and a warm place began to glow in my stomach. I had been in Chicago four months and I was sitting under the L tracks with Mike Royko in an eye-opener place. A Blackhawks game was playing on WGN radio. The team scored, and again, and again. This at last was life.

"The Blackhawks are really hot tonight," I observed to Royko.

He studied me. "Where you from, kid? Downstate?"

"Ever seen a hockey game?"

"That's what I thought, you asshole. "Those are the game highlights."
...

More details of the death of Roger Ebert at his home paper here.


UPDATE:
Roger was also a real, honest-to-God blogger who got into the scrum right up to his elbows, mixed it up like a champ, and regularly engaged his commenters directly in his comment section in ways that awe me,  Here is how Roger once personally made my day.
at April 04, 2013

I was wondering if you'd note his passing. Terrible news, especially after the very optimistic and forward looking blog post he put up just two days ago:

— A Leave of Presence

He really was a great writer -- and not just about movies. He was one of the most incisive political analysts around. I still recall vividly his anti-Bush v. Gore columns from 2000, and his opposition to the Iraq War.

You remember how it was in that period, 2000-2004, when Bush was heralded by everyone as the Triumphant Boy King who would save us all, and questioning anything Bush did was regarded as an act of treason. And you remember how few voices there were saying what *we* believed -- that the election had been stolen, that the war would be a disaster, that Bush was a maniac -- and how gratifying it was to have someone else give voice to those feelings.

It was during those dark times, of course, that the liberal blogosphere was born, when liberals could find nothing in the media to reflect our views, so we turned to Atrios and Josh Marshall and a handful of others, Ebert among them.

He will be dearly missed.

He really was a hell of a writer. I think a lot of people missed that because his beat was entertainment.

I'm ashamed to say that it has only been in the last 10 or 12 years that I really grew to appreciate Ebert's writing(though I was a long time fan/follower of his reviews). Sometimes I would read a few sentences - whether about a movie character, politics, whatever - and actually stop to admire the written words.

Words that rang true, that had a beauty to them, that made me want to reread them just for the taste of them (particularly some of his blogposts).

From Chaz on the Ebert site about his passing: "We were getting ready to go home today for hospice care, when he looked at us, smiled, and passed away. No struggle, no pain, just a quiet, dignified transition."

To a great writer and a life well lived.

Amazing that he wrote that post and then died the next day. What a strength of character he had! I have loved his writing and his ideas for so long - hard to believe he's gone although given the cancer pretty much knew it would happen.

Unfortunately your "personally made my day" link did not work. Hope you can fix or re-post it.

He also was a true fan and a fanzine writer