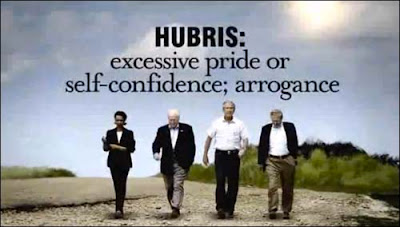 
The late Steve Gilliard from August 2003:

I was watching NBC tonight. Dateline had a documentary on people who have lost their jobs in the era of Bush. Middle class working people finding out they have been sold out by Bush and his friends. The land of no health insurance and living hand to mouth.
I dislike paranoia as politics. I don't go in for believing in great conspiracies, which is why the Greens mantra about the two parties being the same always bugged me. There is a massive difference in taking big money from Wall Street and Hollywood than from big oil and Enron. A massive difference. Big oil and the people in it seem to care about nothing but finding more oil, at any cost. Movie makers will not pollute Alaska.
But George W. Bush has validated every single dark belief I have ever had in government, and I remember Watergate. Bush is no Nixon, who may have been deeply evil, but he had his limits. Bush has no clue. He's never had a boss, missed a meal, suffered a bad day. He blindly goes through life protected in every way from brutal realities. The ideologues around him no more care about the average American than they do the average Iraqi. I have never seen a politician so dogmatic in my life. America is losing the war in Iraq. We control nothing. Yet, despite offers for help, we refuse. This is getting people killed. Every day.
Bush's tax cuts should be called the Master Card/Visa relief act. Because that is where the money goes. You have $300, where does it go, for dinner or to the credit card company. It's a basic fact and Bush blithely ignores it. Tax cuts is no stimulus. A tax cut during wartime is amazingly reckless.
Bush is betraying the country. He's losing jobs, men, our living standards. The GOP has become so venal that they now contract out call center jobs to India. Instead of being an outrage, it's a footnote in the news. His war betrays our ideals and the Iraqi people. His economic policy benefits his friends while even middle class jobs go overseas. His environmental policy betrays our health and welfare. His justice policy betrays the constitution and what it stands for. His foreign policy betrays our principles and our allies. His military policy leaves our soldiers to swelter and dehydrate while the Vice President's company makes millions in profits for jobs they are unable to do competently.
He fixes his mind and the world is supposed to change. When it doesn't, he keeps on with the same policies.
Bush has made true the statement "what is good for General Motors is good for America". Except it isn't General Motors, but Halliburton.
We have been betrayed by George Bush. By his word and deed. he has done what he wanted, what he thought was best, without regard to the consequences of his actions or what will come after him.
Bush was popular because like any demagouge, he told people what they wanted to hear: we were the strongest, we should rule the world, they didn't understand our pain. We can bring justice with violence and it will cost us little. We may lose a few men, but the enemy will be crushed. We don't have to sacrifice, we can cut taxes and wage war and you won't feel a thing. Our allies are weak and unwilling to use force because they have become soft. We not only will rebuild Iraq, but make the middle east safe for Israel. Our ideals are so superior, all must fall before them.
When reality hit, in a series of truck and car bombs, all Bush can say is "there will be no retreat". Huh? There are 142 dead from the latest attack, 125 wounded and a grieving Shia population. What happens when they get Bremer. He's the last high value target left and considering they're so successful no one knows who they are, his life expectancy is dicey at best. These folks have wounded and killed over 500 people in a matter of weeks. Security problem? One might think so. What does Bush say then? "We're there until the end"?
Bush listened to a group of people who saw Iraq as a stepping stone to US/Israeli domination of the middle east. The reality is brutally different. Instead of dealing with North Korea, crazy, untrustworthy  dangerous North Korea or stabilizing Afghanistan, home of the world's largest poppy crop, our Army is trapped in Iraq, dying one man a day.
Every day Bush continues in office, he betrays everything this country stands for. Osama Bin Laden may have destroyed two office towers, but George Bush and his minions are well on their way to destroying our souls. He has made America more hated and despised than Bin Laden's greatest dream. In fighting a monster, Bush seems all too willing to turn America into one.
The only way to win a war on terror is to offer real justice, real law, real alliances. To defend democracy and the rule of law, not seek exemption from it at our whim. As long as we blunder about in Iraq, in a pointless, futile war, we will not only lose that struggle, but much of what makes America great. For an America which describes justice as a JDAM bomb, Hellfire missle and Guantanamo Bay will make more enemies than friends. This is not the wild west but the real world. Defending ourselves is fine and just. But to call aggression defense and mismangement and anarchy liberation is to betray what we stand for and who we are.
It is a shame that the president can't seem to tell the difference. 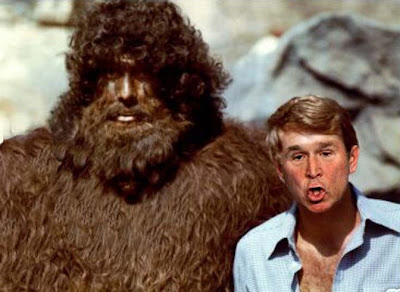 
ATLANTA, Aug. 21 (UPI) -- Two Georgia men who claimed to possess the body of a slain Sasquatch said the mythical beast was actually a Bigfoot costume filled with road kill.

Rick Dyer and Matt Whitton, a former police officer who was fired once the hoax was exposed, said the Bigfoot scam was a joke and they never intended their story to become as sensational as it did, WSBTV, Atlanta, reported Thursday.

"All this was a big joke. It got into something way bigger than it was supposed to be," Whitton said.

The men said the item they had claimed was Bigfoot's corpse was actually nothing more than a costume filled with opossum road kill and leftovers from a slaughterhouse.

However, Whitton said he disagrees with Clayton County Police Department Chief Jeff Turner's decision to fire him on the grounds that the hoax affects his credibility.

"I don't believe it does affect my credibility at all because this is Bigfoot," said Whitton. "It would be one thing if I came out and said that I had something else that is tangible or real, but right now, as far as I'm concerned, there is no real Bigfoot."
...

It is sad to see the level of lumpen dumbass to which the storied profession of hoaxing of rubes has fallen. that turned out to be

nothing but a hair suit 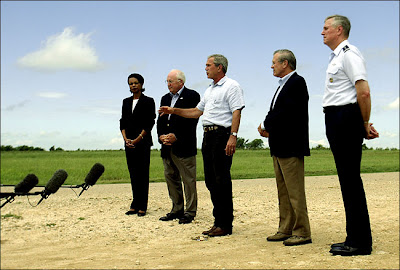 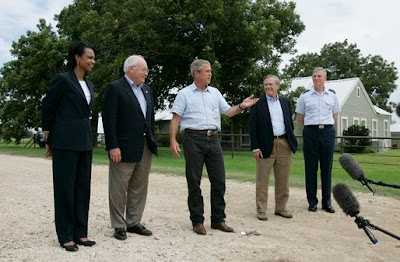 Man, do I miss Gilly.

You are the best.

And they are just that.

With Maddow's scrubbed and edited version of that glorious era we got the same old....mistakes were made. But let's move on.

"Security problem? One might think so. What does Bush say then? 'We're there until the end'? "

Pretty close. What he said was, "We'll succeed unless we quit."

My issue with "Hubris" is that, although they showed that sack of excrement Doug Feith "explaining" himself, there was no mention of the OSP. I don't think anything explains the Yea votes of so many Democrats as the cherry-picked un-vetted bullshit "intel" that came from the Office of Special Plans...

Does Glenn Greenwald have a stranglehold of RCorrie's pussy?