Today on the Shoddiest Obit * 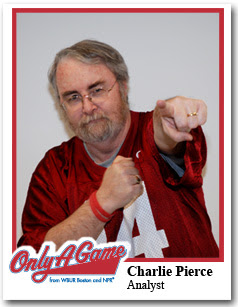 Like the rest of us, Charles P. Pierce of Esquire continues asking the right questions.

And, like the rest of us, he continues to get no on-the-record answers:

Before we examine matters in detail, however, we should ask ourselves the most fundamental question of all?

Why does any television network put Mary Matalin on the air any more? (The same, it should be noted, can be said about her husband, but at least he had a book to shill earlier this year.) She is not entertaining. She is not funny. She is not particularly bright. She certainly isn't in any way informative. She's just a nasty, bitter old piece of work who spent eight years supplying fresh earth for the coffin in which Dick Cheney sleeps during the daylight hours, Ann Coulter without the cocktail dress and the lunatic's performance skills. (Of course, some select people just love Matalin's act. Some people also believe Play-Doh is a food group. Put The Gateway Pundit — aka The Dumbest Man on the Internet — in front of a computer for 30 minutes and you get a guy sticking pencils in his ears for 30 minutes.) So, she gets on there and insinuates that Paul Krugman is a liar, and the whole panel erupts, not over that, but because Krugman intimated that the elite press corps had failed to call out Willard Romney for the truly remarkable liar he's become. After everybody agreed that Krugman was just wrong, wrong, wrong, about all those nice people with whom everybody has dinner in D.C., we really got down to it over the issue of zombie-eyed granny-starving and the Republican ticket...

If you are unfamiliar with the Carville/Matalin beast that stalks the political world, imagine Elizabeth Taylor and Richard Burton in "Who's Afraid of Virginia Wolff?", with all of that venomous contempt for all living things directed outward.

Legend has it that Carville wanted someone to raise him up a passel of snake-headed swamp babies just like him and Matalin wanted a career for herself that would survive both her face collapsing into a subduction zone between black-market Botox experiments and Jack Nicholson "Joker" cheek implants...and her skill set -- paralyzing small rodents with her voice and swallowing them whole -- losings its curb appeal.

And thus they struck a terrible bargain, and were betrothed (as befits their shared profession) on the grave of Lee Atwater at the stroke of midnight on Asa Earl Carter's birthday, each drinking the defiled blood of a mad dog from the skull of Edward R. Murrow and each offering up their souls to mighty Lucifer in exchange for prosperous careers in defiance of all logic and morality.  And since that day their conjoined carcasses have lurched through our political landscape like two drunks veering down the sidewalk, each remaining upright and mobile by leaning against each the other.

Or so legend has it.

Matalin understood early on that the hate racket is like any other racket, and that our media is so constructed as to let Conservatives get away with all kinds of murder.   Armed with these two facts and streamlined by a complete lack of conscience, she has exploited her meager talents and lengthy confidential contact list into a formidable media conglomerate which includes such diverse subsidiaries as flogging HVAC products and medium-priced hooch, sharing a radio microphone with fellow media mogul Arianna Huffington on Air-America-killer Mark Green's horrible, horrible show, and, most importantly getting her own Conservative imprint at Simon & Schuster:

Which puts her in the powerful position of being able to distribute wingnut welfare largess instead of just receiving it.

...
The Cheneys, for Matalin, are like family. Lynne Cheney and her daughter Mary are both Threshold authors. So it’s natural that Dick knocked around book ideas with Matalin in his McLean, Va., home before settling on a publisher. There, Matalin said the vice president offered up some “jaw-dropping” anecdotes for the book that she had never heard in the years she worked for him. Bob Barnett, the D.C. uber-lawyer who represents Rove, Matalin and countless media figures, said that while he can’t speak for the vice president in making a final decision, Matalin’s presence at Threshold “is very reassuring.”

And Rove, who’s turning in his manuscript to Simon & Schuster editor Priscilla Painton in the next few weeks, told POLITICO that Matalin has been helpful along the way by reading sections and offering comments. “Mary understands the audience and understands what goes into making a good book,” he said.

Threshold publisher Louise Burke, who runs the imprint from New York while Matalin pitches in from her New Orleans home, said the distinction between their imprint and others is that Threshold best understands the conservative book-buying audience — a key factor needed to keep the hits coming.

“This is an area where it really helps to be a believer,” said Burke, perhaps one of the few outspoken conservatives in Manhattan’s publishing scene. “I don’t feel you can be successful in this particular genre if you are opposed to the message.”

And, in the end, a drowning man will grasp even the point of a sword:

Respectable publishing houses, the Upper West Side literati complained a few years back, were now turning their presses over to the Ann Coulters of the world, all in pursuit of profits. But these days, after layoffs and drops in sales, such criticism is less frequent.

Gotta' be, just GOTTA' BE one of your best. You, sir, are an institution, and I, sir, belong in one.
Well done.

Books? BOOKS? I think I have heard of those. What are they, again?

Put The Gateway Pundit — aka The Dumbest Man on the Internet

I think it's true.

Jim Hoft is the dumbest man on the internet.
~

The same question could be asked about why Kate Obenshain is on TV. And in Wikipedia.

Have we seen the last of Rachel Marsden?

I still have trouble actually reading these words together.

I think there's been a misprint. It should read "Glenn Beckkk's Come-on Nonsense."

It's late, but I gotta say it before I retire for the evening.

I never knew the depths- until now and only by going back.
I had thought of them as a pioneering Margaret Something/Jon Avalon power-couple showin' us at home how to be fantastic and strident all at once.
I also thought, during the Clinton time, that Carville and Begala were the guys I would put my money on. I find Begala on my liberal CNN panels to be smart, funny and slaying dragons with the best of them.
I saw the last interview Carville gave to Ashley Banfield before she went to the farm team- it took her most of the time slot to pose her wordy question- by then he threw the book on the panel in disgust (because hey who doesn't plug their book on tv) and shut it down. I think Banfield filled the rest of her time and that was that. I liked it. To me that is essential Carville and Begala. I almost don't want to learn about their political maneuverings, but learn I will.

They are in no way Stone - Manafort - Name Any Con - Attwater - operatives and madmen, blood-money-sucking-snakecharmers...
That much I believe to be true.