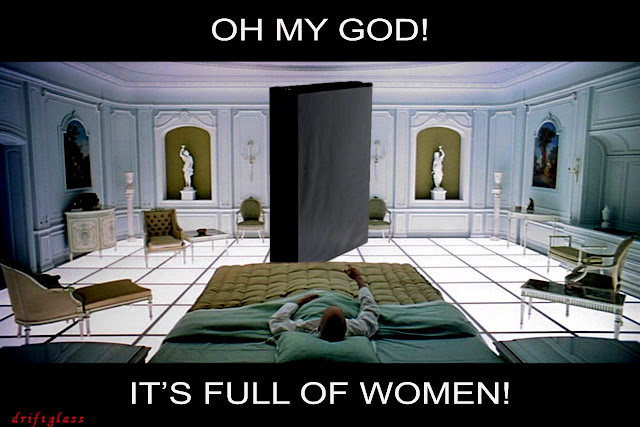 Hey..the HBO show "Big Love" had "binders full of women"..they called them "The Joy Book". It was the binder old Mormon men looked at to pick out their new brides...filled with pictures of 14 year old girls.
I guess you can take the man out of the Mormon..but you can't take the women out of their binders.

Bonus! Ronney lied about it! (I wish Obama had also pointed out that conservative justices decided the Lily Ledbetter case incorrectly and conservatives opposed the law, but he a decent job.)

Brilliant. I would love to think that if I was still blogging and photoshopping I would have thought of this, but I doubt it. Terrific, as usual!

Sure...if you go by the movie.

However, if you go by the novel...

2001: A Space Odyssey
In both the book and movie 2001, astronaut and scientist David Bowman is on a mission to track the source of an alien artifact found on the moon, which leads to a moon around the planet Jupiter (in the novel, Saturn); the story takes place in the year 2001. He has to interact with both a human crewmate and an intelligent supercomputer named HAL 9000. The HAL 9000 computer utility suffers an apparent malfunction which leads to the death of all humans on board except David Bowman. Through determination and cunning, David is able to outwit the supercomputer and regain control of the spaceship Discovery. Upon orbital insertion around Jupiter, however, David Bowman is confronted with a huge, black featureless monolith with the exact proportions of 1 by 4 by 9 (the squares of the first three positive integers). He takes a space pod to investigate. In the film, he is greeted by arguably the most surreal sequence of scenes in science fiction film history. In the novel, his last contact with Earth is the radio message "The thing's hollow—it goes on forever—and—oh my God—it's full of stars!"

Thank you for the explanation. I did not fully get it, and there are some bits of the imagery whose allusions are still unclear to me. I glommed that the black object was a binder AND the black object from 2001 thanks to the "Disgrace Odyssey" line (although I associated it with the ape-fight scene). The "full of stars" line I did not know, because I only saw the movie (literally decades ago) and did not read the book. Still not clear why the luxe, floor-lit (mirror-tiled?) bedroom. The trouble with imagery that's too genius-istic is that it goes over the head of many observers, and I'm no slouch when it comes to decoding memes.

way to defend your work Driftglass! Kurt it is humor to acknowledge current events with a timeless picture.