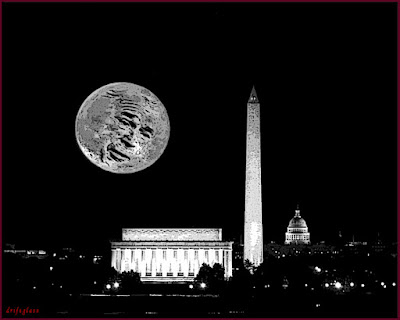 "If Bush had actually done his job and killed Osama bin Laden, the Right would have cleared room for him on Mt. Rushmore. If Bush had killed bin Laden and helped take down Gaddahfi? Over a single summer? Fuck, the Right would this minute be carving his face on the Moon. "


Some of you non-Republicans out there might remember May 1, 2003 as the day George W. Bush pranced across the deck of the USS Abraham Lincoln in codpiece and flight suit, preened beneath the now-infamous gigantic "Mission Accomplished" banner and while using the men and women of the United States military as political props, lied to the American people about the war his Administration had dupes us into and which they were, at the time, in the process of catastrophically botching.

It was an event which, like the Iraq war itself (and every other fucking thing Karl Rove has ever said or done),  had been meticulously calibrated by the Cheney Administration to yield maximum political throw weight for the Republican Party (White House Chief of Staff Andrew H. Card Jr. was obligingly specific in describing how the the Bush Administration had scheduled  Iraq war like a new sit-com: "From a marketing point of view, you don't introduce new products in August.")

They were all awful, awful people and one year (and many, many impeachable lies and war crimes) later, the entire Republican Party was eagerly preparing to re-nominate George W. Bush for president by planting their convention's podium squarely atop the graves of those who were murdered on 9/11 and turning the entire event into a garrish celebration of the martial genius of Commander Cuckoo Bananas: a ghoulish carnival of rage and blood, complete with John Kerry as the fey, Murrica-hating dog-faced boy whose first act as President would be sell the United States out to a sinister, Franco-Muslim cabal.


...
Both sides are extraordinarily willing to flout respectability to show that they are tough enough to bare the knuckles.

In November, the Romney campaign ran a blatantly dishonest ad in which President Obama purportedly admits that if the election is fought on the economy, he will lose.
...

Last week, the Obama campaign ran a cheap-shot ad on the death of Osama bin Laden.
...

Oh it is a thing of pure, Centrist bullshit glory my friends:

"Maybe a campaign is like a big version of 'American Idol.'"...

"Maybe, on the other hand, hiring a president is like hiring a plumber."...

You could make a case that most campaigns are a little of all three."

Pure Centrist "Both sides do it" air pudding, specifically designed to do what all of Mr. Brooks' endless, endless, endless New York Times-sanctioned sludgetide of Centrist bullshit is always designed to do:  take the sting out of some act of Republican perfidy, hypocrisy or treason by drawing an utterly false equivalence between it and some imaginary sin or slight on the part of Democrats.

This time he tarted it up with some not-so-subtle shouts out to the raving, Michele Malkin, "OMFG! Obama is a Chicago gangster!" crowd --


"The slam made Clinton look small, it made Obama look small, it turned a moment of genuine accomplishment into a political ploy, but it did follow the rules of gangland: At every second, attack; at every opportunity, drive a shiv between the ribs.


"This martial-, gangland-style of campaigning apparently makes the people in the campaigns feel hardheaded, professional and Machiavellian. But it’s not clear that it’s actually the best way to win an election."

-- but such distinctions are just the gingerbread on the slaughterhouse.

By now, "Both sides do it" is almost literally the only column David Brooks ever writes.

It is always a lie.

Everyone knows it is a lie.

And no one but a handful of shrill, vituperative, foul-mouthed bloggers on the Left are ever going to call him on it.

But this time around the block, that is not what is interests me.

What interests me greatly are Our Mr. Brooks' own absolutely glowing impressions of George W. Bush's now-infamous "Mission Accomplished" speech (and, more importantly, his whiiining about the rude reactions of the pundits.)

Yes, such a thing really does exist.

It was written by Our Mr. Brooks back when he was an eager, young(er) warpimp working for Bloody Bill Kristol at the "Weekly Standard", just one day after Dubya shook his moneymaker on the deck of the USS Abraham Lincoln.  As near as I can tell it has been mouldering away undisturbed by the picklocks of history in Mr. Brooks' journalistic crawlspace until I stuck my arm into the rancid neocon muck of the "Weekly Standard"'s archives and yanked it back into the daylight:

Cynics and the USS Abraham Lincoln


The pundits are so sophisticated that they see the Abraham Lincoln speech as nothing more than a campaign stump.
5:00 AM, MAY 2, 2003

That's called sacrifice. Most of us are basket cases if we're on a business trip away from our families for four days. These people were gone nearly a year. And they did it to defend the country. They did it to liberate the people of Iraq, so that 25 million Iraqis would be emancipated from a sadistic regime, the greatest victory for human rights since the defeat of the Soviet Union.

And what do my fellow pundits say? They sit in the studios and point out sagely that the speech was a tremendous photo-op, and then they go home to the safety of their beds and the comfort of their families.

Somehow the sacrifice of those men and women never registers. It's not worth commenting on. The only thing that matters is that this was a campaign event and it's to be judged as just another rally on the way to the convention. The ship, the soldiers, the ocean--all of it is treated as mere bunting, as a Deaveresque device to provide pretty pictures. This is what passes for wisdom.

Now I'm not denying that this was in part a political event or that President Bush is a politician. But this was first an American event, a recognition of the noble deed this country is accomplishing. And it was an act of recognition for those soldiers, and through them all the soldiers who fought, including those who were injured and died.

And much of punditry treated those soldiers as mere props, as not even human. I understand that most pundits don't know too many of the people on that ship, but it doesn't take a huge act of imagination to feel what they have been through and to at least register their idealism and what they have suffered for it.

Somehow the cynicism and the churlishness of the savvy campaign commentator makes that impossible.

As I say, I'm in a terrible mood. Maybe I'll feel better tomorrow.

David Brooks is a senior editor at The Weekly Standard.


I won't deny that being America's leading expert on the life and lies of David Brooks is sometimes a dirty and discouraging job.

But every now and then...


"Somehow the cynicism and the churlishness of the savvy campaign commentator makes that impossible."


UPDATE:  An alert correspondent points out that this is not the first time Our Mr. Brooks has had to resort to Strategic Forgettery to wipe out his own, execrable public record on the subject of George Bush and Iraq from back in the Olden Days in order to undergird whatever dishonest insipid point the New York Times is paying him to make now.

As I documented first hand back in 2010 ("All The Lies That Are His Life"), this is quite true.

It is also quite true that he will continue to lie and get away with lying as long as the only people who call him out on it are that handful of shrill, vituperative, foul-mouthed bloggers on the Left.

Until then, nobody can see the Great Oz!

And ;et's recall the deep insights Chris Matthews offered us when George W. Bush dressed up in his little GI Joe flyboy playsuit and went prancing around on the deck of an aircraft carrier, shall we?
Matthews gushed, "He looks for real. What is it about the commander in chief role, the hat that he does wear, that makes him -- I mean, he seems like -- he didn't fight in a war, but he looks like he does."
And then Matthews fawned, " We're proud of our president. Americans love having a guy as president, a guy who has a little swagger, who's physical, who's not a complicated guy like [former President Bill] Clinton or even like [former Democratic presidential candidates Michael] Dukakis or [Walter] Mondale, all those guys, [George] McGovern. They want a guy who's president. Women like a guy who's president. Check it out. The women like this war. I think we like having a hero as our president."
I'm surprised Matthews didn't swoon with admiration, all over one of the most manifestly fake, politically dishonest, transparently stupid stunts ever mounted.

It's not just the grade-school-level logical construction of Brooks's Weekly Standard column that astonishes, it's simply how appalling its writing is. Clipped construction, weak or nonexistent connecting structures, and stream-of-consciousness point making. Driftglass, I often hear your laudable observation that meritocracy is a condition almost completely lacking in news media outlets (at least it is in the edit circles I still walk in), and nothing could ever prove that point better than Brooks's turgid, pedestrian puddle of prose. Who the fuck would hire this man, much less promote him? It would be hysterically funny if it wasn't so tragic for the profession.

Is it me, or is calling Barack Obama a "gangland-style campaign[er]" racist as well as just plain silly?

i suppose we should be grateful that brooks is as bad as he is; otherwise he might persuade people to his point of view. as it is, we can point and laugh, not being the ultra polite members of the club, who are condemned to damn with faint praise.

West of the Cascades said...

I've noticed that his own colleague at the New York Times (may it soon go bankrupt), Paul Krugman, has started to call out Brooks on a regular basis, although apparently the Times prohibits columnists from criticizing each other by name. Of course, Krugman is shrill, but not vituperative and foul-mouthed.

On Lindsay's point, I think "gangland-style" refers more to the gangsters of the 1930s than more modern gangs -- it could be a reference to the President's Chicago roots, but I don't think Brooks is making a racist slur. But plain silly -- yes, quite likely.

One note about the poor sailors who had been away for a year: Their ship was kept at sea and extra 24 hours, so the President could make his landing.

Paul Krugman is the only reason I have a digital subscription to the New York Times. And he has been calling out not only Our Mr. Brooks, but also another waste of column space, Tom Friedman, for quite some time. You always knew who he was talking about, but he has started naming names here recently. And I couldn't be more delighted. Paul Krugman is called shrill because the right can't refute what he's saying because they know it's true, so they go for ad hominem attacks because that's all they've got. Which, of course, is standard operating procedure for the right and always has been.

I, for one, fervently hopes that the Professor continues to be shrill.