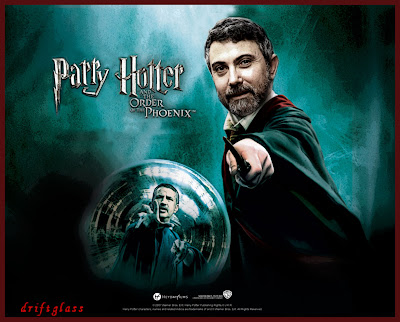 The Center did not hold.

Which is not exactly a huge surprise, considering that "The Center" is a fraud.

Like the "Tea Party", Centrism is fantasy cooked up by powerful people who were deeply invested in horribly bad ideas that have failed over and over again.

Like the Teabaggers, Centrists are looking for a way to duck out on paying the massive bill that their horribly bad ideas have saddled us with.

Like the Teabaggers, Centrists dare not admit the obvious -- that they have been horribly wrong and the Left has been right all among: any such admission would be followed by a massive, widespread hemorrhaging of Beltway power, prestige, self-image and money.

So like the "Tea Party", Centrism takes the form of a comforting hoax, energetically perpetrated by extraordinarily well-paid hustlers on the lazy and the ignorant.

The good news is that defending the Big Lie of Centrism continues to drives its perpetrators onto ever more hilariously untenable ground and into ever more humiliating acts of public contortion as they are forced to invent ever greater imaginary Liberal sins to balance out the very real and daily atrocities of the Right.

Behind their fortress walls, Centrists have become quite the (to quote Katherine Hepburn in "The Lion in Winter") "spindly, rickett-ridden, milky, wizened, dim-eyed, gammy-handed, limpy line of things..." as the gnawing knowledge of how eggshell-thin and flimsy the Big Lie on which their lives, their fortunes and their scared honor now completely depends turns them into the worst kinds of cowards.

Fortunately, for the good guys, after long years of lonely struggle there are now more that just a few crazy, Liberal bloggers laying siege to the Centrist fortress.

From Dr. Krugman at the Big City Newspaper:


...
The Ryan cult was very much on display last week, after President Obama said the obvious: the latest Republican budget proposal, a proposal that Mitt Romney has avidly embraced, is a “Trojan horse” — that is, it is essentially a fraud. “Disguised as deficit reduction plans, it is really an attempt to impose a radical vision on our country.”
The reaction from many commentators was a howl of outrage. The president was being rude; he was being partisan; he was being a big meanie. Yet what he said about the Ryan proposal was completely accurate.
...

So the proposal is exactly as President Obama described it: a proposal to deny health care (and many other essentials) to millions of Americans, while lavishing tax cuts on corporations and the wealthy — all while failing to reduce the budget deficit, unless you believe in Mr. Ryan’s secret revenue sauce. So why are centrists rising to Mr. Ryan’s defense?

Well, ask yourself the following: What does it mean to be a centrist, anyway?

It could mean supporting politicians who actually are relatively nonideological, who are willing, for example, to seek Democratic support for health reforms originally devised by Republicans, to support deficit-reduction plans that rely on both spending cuts and revenue increases. And by that standard, centrists should be lavishing praise on the leading politician who best fits that description — a fellow named Barack Obama.

But the “centrists” who weigh in on policy debates are playing a different game. Their self-image, and to a large extent their professional selling point, depends on posing as high-minded types standing between the partisan extremes, bringing together reasonable people from both parties — even if these reasonable people don’t actually exist. And this leaves them unable either to admit how moderate Mr. Obama is or to acknowledge the more or less universal extremism of his opponents on the right.

Enter Mr. Ryan, an ordinary G.O.P. extremist, but a mild-mannered one. The “centrists” needed to pretend that there are reasonable Republicans, so they nominated him for the role, crediting him with virtues he has never shown any sign of possessing.
...

Honestly, my only dispute with Dr. Krugman is his title, "The Gullible Center".

Yes, among the many motives of the suckers who buy into the Big Lie of Centrism one will probably fine "gullibility" in there somewhere.

But "gullible is not the correct word to describe the thousands of media and political hucksters -- including a couple of Dr. Krugman's colleagues at the NYT -- running this vast and well-protected scam.

Funny how people read the same words differently, isn't it?

I thought the "gullible center" were the imaginary people the well-connected "centrists" were playing to.

Here's a nice tar-baby, as a bumper sticker:

TAX THE RICH - They're
The Ones Who Ran Up the Bill.

Now let just one prominent Democrat say that explicitly, and the right wing will be all over that tar-baby like flies on shit.

That's when they find out just how massively most people agree with the sentiment (which has the added virtue of being true, of course.)

I bet he'll be excommunicated from the NYT by May.