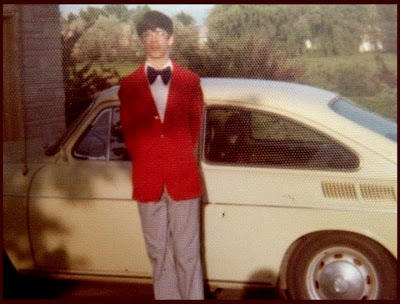 Don't laugh: back in the day I flipped a lot of real estate in this jacket.

Yes, tomorrow is my 7-year blogiversary.

As a special gift, the good people at NBC have put together what may be the single greatest April Fool's Day "Meet the Press" panel in history:

Frankly, I would have preferred cash.

Also, yes, that is me in the snappy red jacket, handmade by mom (as a lot of my clothes were) for a boy who was growing at near-Glenn Manning speed in a single-parent household where money was incredibly tight. I am standing in front of the car she, my brother, myself and our dog would fold ourselves into with naught but tent, sleeping bags, camp stove, a Thermos of coffee and a few 8-tracks for our annual, cross-continental sojourn to Iowa, Nebraska, Colorado and points west.

The photo was taken, as I recall, in the middle of the Watergate summer of 1974.

Several weeks my family was gathered around the beat-up, black-and-white teevee in my sister's Phoenix  apartment to watched the President of the United States resign in disgrace.

Some time after that, the new President -- Gerald R. Ford -- announced that "our long national nightmare was over."

Boy, did he get that wrong.

Here is the PayPal button should you wish to make a fundraiser contribution.

Or, if you prefer using the U.S mail, you can send a check made payable to and care of

And also too, I thought you had a good thing going where you would only allow an fleeting glimpse of your hand (holding a Macallan 18) to sneak onto the webs. Sorta like Tim Allens only-partially-seen next door neighbor.

Happy blogiversary! Now please tell me you're kidding about that #MTP lineup. Jeeeeesus!!!

Re: the bow tie, I always imagined you were much cooler than that. My bad! ;)

I adore hearing you and Blue Gal's thoughts on your podcast and blogs.

You hit all the talking points right on the money, because it seems, you have a feel for what "the others" (that's us) are thinking.

Keep up the good work.

Jeez, imagine the mental discipline required for that kid to fold himself small enough to fit in the back seat of a VW Fastback. And sit there through a cross-country trip. It puts a fakir on a bed of nails to shame.

No wonder you can read David Effing Brooks and Andrew Effing Sullivan endlessly without stroking out.

Thanks for doing what you do, good sir.