Non Sequitur of the Month Award 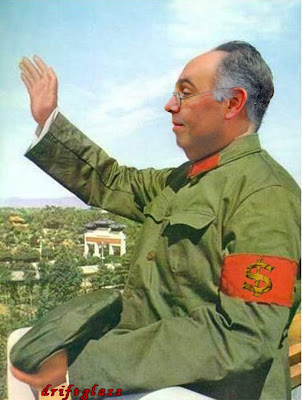 Coming in just under the wire this month is this out-of-nowhere ad for the Joys of Fracking and how it suffers at the hands of Dirty Fucking Hippies from Our Mr. Brooks:

David: But the bigger problem is that Democrats may lose the spirit of enterprise. University town voters tend to be put off by the policies favored by the aspiring entrepreneurial classes. They side with the environmentalists over the people who like pipelines and shale gas, for example.

For those of you wondering, well, where the fuck did that come from, this 11/04/11 paean to the keen insightfulness and independence of Our Mr. Brooks from Exxon Mobile's VP of public and government affairs should clear things up a little:

A Must Read: David Brooks on Shale Gas
November 4, 2011 | Posted by Ken Cohen

For those who are following the debate in this country on shale gas development, as I am, today’s column by David Brooks in the New York Times is a must read.

In balanced terms, Brooks summarizes the future energy and economic potential of America’s enormous shale gas endowment – and the current debate surrounding its safe and responsible production. The benefits of shale gas development in terms of economic growth, job creation and energy security are without question, as he points out. The only question is whether our political leaders will permit these benefits to be realized.

Brooks is an independent thinker and keen observer of the American political landscape, so his words carry weight. His column makes a valuable contribution to the important debate on U.S. shale gas development.
...

This is presented by way of a very real-world example of why the size and reach of the platform from which one is able to lob one's opinions actually matters enormously, and why simply ignoring people like Mr. Brooks doesn't work.

But before arriving at this moment of naked pimpery, (How are your Exxon stocks doing, David?) Our Mr. Brooks stopped briefly to explain that the GOP is not the Party of the rich:

David: Besides your favorite episode, he has a class problem. Many Democrats believe that the Republican Party is the party of the privileged. That’s wrong.

And to wipe his feet on the Dixiecrats who have given David Brooks' Party its margin of victory in every election it has won since 1968:

David: Some liberals imagine that there will be a proletarian revolution. They’re right. We’re in the middle of one and the proletarians have decided to back Gingrich, Bachmann, Cain and the rest. Romney does fine with college educated Republicans, but so far he hasn’t won over the working class.

After which ExxonMobile gets its free ad, and then we round it all out with this bloodless cybprg sermonette on the perils of doing either one thing or another:

David: The economically vulnerable naturally enough prefer policies that foster security, rather than policies that foster risk-taking. A party that builds its majority around these groups will eventually lose touch with the forces of disruption and vulgar ambition. It will end up placid and dispirited.

This was all brought to you via the New York Times painfully unpleasant weekly "Conversation" which one long-forgotten wag once characterized as a...

..nails-scratching-on-the-chalkboard-of-life exercise, [in which] New York Times op-ed columnist Gail Collins gamely plays the role of the genteel, matronly hostess whose schtick is to nervously laugh off the fact that, between bouts of butt scooting its bleeding sphincter all over her lovely duvets, a very large mad dog is running amok at her soiree and tearing the throats out of her other guests.

Across the table at the excruciatarium sits Our Mr. Brooks -- the mad dog's owner who (sort-of-but-not-really-see-it's-very-complicated-and-involves-Niehbur) disowned the dog once it dragged the third mutilated corpse into the conversation area (where he was incorrectly explaining something about The 60s), and tossed it at Mr. Brook's feet -- joking weakly that cleaning up after house pets can sometimes be a nuisance, and Tom Friedman told him once that lemon juice and a little seltzer can get all kinds of household stains out of one's duvets, and have you ever noticed how Liberals are generally very naughty.

My, aren't we having a lot of weather this year?

This all peppered with Lockhorns-grade unfunny jokes about big, wide, slow-moving targets like, say, Ron Paul.

The result comes across as feverishly hollow and forced as a family that has made a pact never to speak of The Bad Thing That Happens When Daddy Drinks, trying to navigate across the mine-laden surface of another morning-after of splintered furniture and angry bruises.

I don't know if you've used that picture before but goddamn it is magnificent.