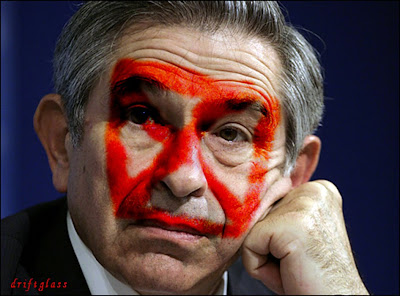 Which begs the question: why is this open moral sewer of a human being being asked to appear as an expert or spokesman for anything at the Mouse Circus today?

You just stated a whole bunch of qualifications, from their perspective.

I think you've answered this question in several previous posts.

Presumably Wolfy was invited on because he promised a reprise his famous to comb-sucking performance.

The only way to get kicked out of the Village is to criticize the Teabaggers, or Rush Limbaugh.

Or kill a hobo, live on camera.

I doubt killing anyone, live on camera, would bother the Mouse (should be Rat) Circus audience. They can rationalize anything Their Side Does. Their Cult Leaders are Divinely Inspired.

I like capitalizing certain words for emphasis. Got it from Georgette Heyer books where the females would talk about That Woman, as in "That Woman will cross my threshold over My Dead Body!" (To which the hero replies "That would be a sight, indeed!")

He advances the interests and profits of the powerful.
Therefore he is always a Serious person deserving of madia attention and respect. Being repeatedly and disastrously wrong is irrelevant when your job is to push a proftable storyline.

Heh. I got the Bad Habit of capitalizing Various Words from Frank Lloyd Wright books. He's hilarious at it.

OT, drifty, I am quite a bit in love with the new header graphic.

You forgot to mention his sunni spy girl friend.

That suits him well..