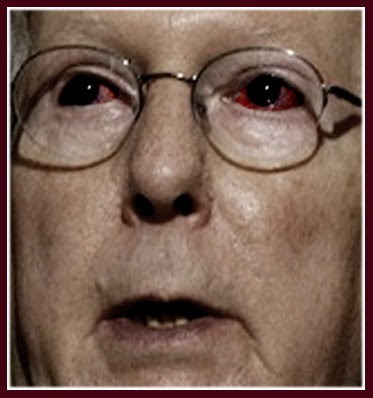 "And, for an instant she stared directly into those soft blue eyes and knew, with an instinctive mammalian certainty, that the exceedingly rich were no longer even remotely human"

This is the hill the Right was willing to die on.

This was the issue over which the Party of God was willing to screw "...the least of these."

This was the issue over which the Party of Personal Responsibility was willing to hold America's unemployed hostage during the worst economic calamity since the Republican Great Depression.

And it worked: they got their Blood Money for Billionaires.

So, are they celebrating? Dancing little goose-stepping jigs?

They're bitching that their patriotic, deficit-warrior, Tea Party sensibilities were cruelly violated because the tax cuts did not go nearly far enough.

They're moaning that the weak-willed GOP was willing to give up one pfennig to subsidize the lazy, mooching lifestyles of unemployed losers.

Or those evil Unions.

Because it's always something,

We will become all one thing, or all the other.

They're moaning that the weak-willed GOP was willing to give up one pfennig to subsidize the lazy, mooching lifestyles of unemployed losers.

I thought you said the billionaires got their tax cuts...

It isn't enough that the Billionaires get tax cuts. Even if they paid NO taxes, they'd still be furious about seniors getting Social Security and poor kids getting "free" lunches and workers being able to pay rent AND buy food AND have heat! It's just Not Fair! They. Want. It. ALL.

Well, this is what Neville Chamberlain Obama gets. If he thinks the Repubs were going to be nice to him after his cave-in, he's got another think coming. It's like with all bullies--once they figure you're a wimp, they'll just keep pounding you.

Yes, Obama apparently learned the art of negotiating from the Munich 1938 school...

Stock up on pitchforks and torches now. There will be a run on them in the next few years when the pig people finally figure out they are not in the 1%.

Obummer is bought and paid for.

And it is symbolized with a swastika.

There is a reason that Prescott Bush and the banksters continued to fund Hitler right up until they were stopped.

Because it's always something

...and the GOP will still have the Deficit Commission recommendations and control over the Debt Ceiling.

Forget two years from now. Even if we all agreed Obama got a good deal for America today, what's to stop the House from yanking it right back in a few months while threatening to let the country go into default?

Please tell me I'm missing something...

they'd still be furious about seniors getting Social Security and poor kids getting "free" lunches and workers being able to pay rent AND buy food AND have heat!

Yeah, it was my failed joke of suggesting the shiftless and lazy were the billionaires.

Anon,
OK. You're missing something.

And the goobers all cheer on a society of exploiters.
They're so stupid that they think that because they share the same sky-daddy Jeebus illusions as the exploiters, that they are in on the con.