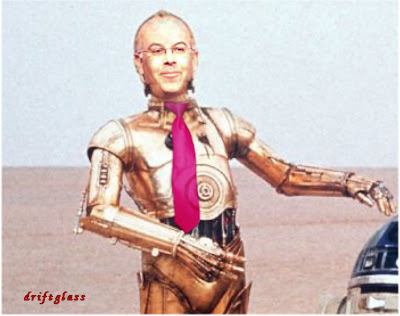 In his weekly book report of something someone else has written ("Relax, We’ll Be Fine"), the New York Times' in-house protocol droid glimpses the Big, Shiny World of Tomorrow.

"In his book, “The Next Hundred Million: America in 2050,” über-geographer Joel Kotkin sketches out how this growth will change the national landscape. Extrapolating from current trends, he describes an archipelago of vibrant suburban town centers, villages and urban cores."

Turns out, it's "The Jetsons":

(LINK TO VID REMOVED DUE TO OBNOXIOUS AUTO-STARTING)


Of course, Bobo doesn't explain exactly how we're going to dodge things like Peak Oil. Or cope with the final collapse of the manufacturing sector and the accompanying extinction of most of the middle class. Or the massive trained worker shortage that will follow the exodus of the Boomers from the workforce. Or the global depletion of arable land, fresh water and a whole host of other scarce resources. Or the wars those shortages will ignite. Or the end of literacy in America and the rise of a stultifying cult of superstition and mysticism. Or global warming. Or the Army of the Twelve Monkeys.

Or how we'll ever get the boots of our new corporate feudal lords off of our collective throats long enough to deal with these problems.

I guess all that boring, technical stuff is in the footnotes.

He does, however, broad-stroke how this awesomeness is gonna land in the laps of the Land of the Free in the very last paragraph:

"In sum, the U.S. is on the verge of a demographic, economic and social revival, built on its historic strengths. The U.S. has always been good at disruptive change. It’s always excelled at decentralized community-building. It’s always had that moral materialism that creates meaning-rich products. Surely a country with this much going for it is not going to wait around passively and let a rotten political culture drag it down. "

Allow me to translate.

"In sum, the U.S. is on the verge of a demographic, economic and social revival, built on its historic strengths."

We're somehow going to find another whole 'nother continent to purloin. Our imaginary new continent will be loaded with incredibly abundant natural resources and slave labor. We will destroy every other industrial power on Earth by re-enacting WWII in every particular, after which we will exploit the shit out of our imaginary continent full of cheap oil, cheap minerals, cheap food and cheap labor at exactly the moment when the rest of the world needs it the most. And then we'll all be rich! Rich as pirates!

"The U.S. has always been good at disruptive change."

As the mortal remains of the tens of thousands buried at Antietam, Chancellorsville, Fredericksburg, Appomattox, Gettysburg, Johnson's Island or any of a dozen other Civil War cemeteries can attest...

That is positively the nicest way of saying "empire" I have ever heard.

"It’s always had that moral materialism that creates meaning-rich products."

Where is that boy with my latte?!

"Surely a country with this much going for it is not going to wait around passively and let a rotten political culture drag it down."

I am not mentally or emotionally capable of facing the brutal realities of the future to which Conservatism has condemned us, so this is the closest I will ever come to saying "I'm sorry" for being one of the leaders of a movement which has so savagely fucked this country up that it might never recover.

Finally, I can think of no clearer way of explaining the vital difference between Mr. Brooks and myself than the quote with which I began this blog five years ago:

"I don't try to describe the future. I try to prevent it."
-- Ray Bradbury

What a beautiful world this will be.
What a glorious time to be free!

In my childhood, we had something called "Popular Science Magazine". And last I checked, despite those wonderful four-color illustrations, nobody I know is commuting by personal hovermobile to their all-plastic mountain villa, where a breeder reactor the size of a lunchbox provides them with power too cheap to meter.

It's like an even stupider version of the Underpants Gnomes:

1. Starve or take a sledgehammer to each and every bit of the national foundation necessary for creating a broad-based, high-tech prosperity.

Standing chin-deep in the reeking, radioactive shitmire, Bobo wants to start handing out the shades, 'cause everybody needs 'em in Tomorrowland.

"Surely a country with this much going for it is not going to wait around passively and let a rotten political culture drag it down."

I'll just get this out there right now.

If any of you TOUCH that mud puddle in front of my refrigerator box condo there will be hell to pay. Thanks.

Dang Drifty: Chicago is a brave new world unto itself:

What fucking planet does Bobo live on? It certainly ain't this one.

Which he eagerly looks forward to - and its replacement by - their much more intelligent, cultured rulers: old, white (80% male after the abortion laws take full effect) Rethugs.

And they've certainly got the money and firepower to make this stick (see the latest TomGram on the materiel currently awaiting transport back to the U.S. from the Long War).

and the accompanying extinction of most of the middle class.