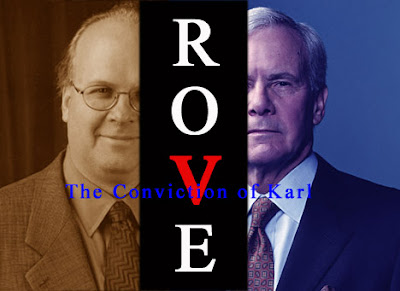 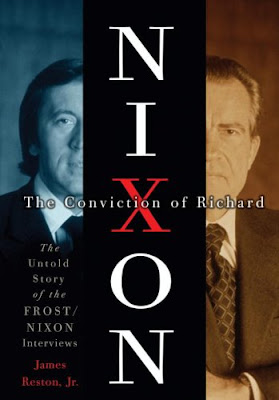 Because when it turned out that Nixon -- "the man who committed the greatest felony in American history" -- was never going to stand trial for his crimes, it fell to journalists to provide the conviction-by-proxy that justice, democracy and the American people so desperately needed.

It is now thirty years after Frost gutted Nixon on national teevee, sparing us (or so we thought) yet another, inevitable Nixonian rise from yet another political grave followed by yet another giddy, fascist Conservative wilding through the streets of America.

But far from having learned from our mistakes, we instead repeated them.

On steroids. And cut with Hulk gamma-irradiated monkey growth hormones.

We got the Bush Regime, arguably the most incompetent, corrupt and outright-treasonous Administration in American history. A regime so reckless, savage and gleefully bestial that it made the career-Nixon-hating Hunter Thompson actually pine for the good old days of Tricky Dick:

"I miss Nixon. Compared to these Nazis we have in the White House now, Richard Nixon was a flaming liberal."

And, like Nixon, it is more than likely that not a single one of the smirking traitors who nearly wrecked this country will ever spend a day in jail.

Instead they remain lodged in our flesh like so many ricin pellets, oozing their poison into our national bloodstream, waddle from one fawning audience to another, worming their way into major media outlets, or dispatching their degenerate children and underlings out into the world the keep their poison pumping.

They soiled our good name, bankrupted the country, shredded the Constitution and kicked the crutches out from under the global economy on their way out the door, and while it is sometimes hard to focus on them through the flames of the world they set on fire, we must.

We must, because if we do not formally, culturally shun them, break with them and come to look back on them forever with horror and shame, they and their imitators and fanboys will fester. And without cleaning and binding up the deep and ugly wound they slashed across our national soul, their disease will continue to rage and rot us from within.

Which brings us to Sunday.

In four days, one of the principle architects of this depraved Administration will be on teevee.

He will be interviewed for approximately 30 minutes by Famous Journalist, Tom Brokaw.

You perhaps see where I'm going with this...


Rove, of course, is a known quantity; a conscienceless thug who would be rotting in prison cell over in the Better Universe.

But we don't live in the Better Universe. We live here, which means this is about Tom Brokaw.

If he has any reporter left in him at all, on Sunday he has a chance to do some old-fashioned, journalistic public service flogging. He has been handed on a platter of the finest Sterling the opportunity to do what none of us out here in the cold, bloggy world will ever even come close to getting a shot at: demanding answers from Karl Rove face-to-face. To act as an advocate on behalf of the public's right to know. To honorably "afflict the comfortable" and restore a small portion of the trust which the Fourth Estate has spend the last few decades frittering away so easily and cheaply; an cynical erosion of one of the most critical, load-bearing pillars of democracy that reached its nadir during the Age of Bush.

If he has any reporter left in him at all, he can help to lay the Foundations of History on which the judgments of future generations will rest.


If not -- if Tom Brokaw lets this oily little Judas slip through his fingers in the name of the clubby, malignant courtesy that elitist Villager insiders habitually extend to their lodge brothers, then the the best and possibly last opportunity to bring Karl Rove to some kind of public book for his crimes against democracy will have passed.

Which gives us just a few, short days to email, blog, Twitter and in every other way we know how contact Tom Brokaw and NBC and let them know that "We The People" are tired of having a Freedom of the Press for which so many millions of Americans have fought and died used a puke funnel for everything from the tribulations of drunken celebrities to long-discredited Neocon drivel, but never for anything so genuinely vital to the survival our democracy as holding some of its worst predators to account for their predations.


*(Fisking: "...a point-by-point criticism that highlights perceived errors, or disputes the analysis in a statement, article, or essay.")
at March 11, 2010

Anyone know any better ways to reach him than through the meet the press comment form?

I looked for an email at several locations but no joy: Brokaw is not a member of the NBC regular lineup so there is no contact info for him on the site that is available to the public.

"Fluffy" Gregory, OTOH, is all over F-book and Twitter, but is slipping out of town for this ugliness.

We got the Bush Regime, arguably the most incompetent, corrupt and outright-treasonous Administration in American history.

Arguably? Isn't this where it goes terribly batshit? That we could even consider arguing this?

Bush's groomers felt betrayed by Nixon. They truly believed then, just as they do now, that nothing is illegal for Presidents or President's men as long as nobody cracks.

The four pillars of Rethuglicanism were formulated upon the "errors" of Nixon. They produce in-house faux-scholarly work to butress their immunity. Their media disseminates the lies. Their operatives stay in step. And their base laps it up like gravy because they desperately NEED to believe.

Sociopaths like Rove and Cheney are specifically selected for their character.

I have to agree with Rehctaw that Rove and Cheney were prolly tested for socio/psychopathic tendencies before hiring.

And Tom Brokaw. A journalist? Hasn't been in decades - at least not since the onslaught of the Nixonistas in Dumbya drag.

That we could even consider arguing this?

And no one in the US has ever learned from a mistake. I posit the history of all-out war on everyone since the end of WWII with no end in sight. These f*cking guys think they are heroes you know - and is undoubtedly the reason Brokaw is in charge.

But far from having learned from our mistakes, we instead repeated them.

Remember that they are now heavy into the selling of the idea that everything they did in Iraq has worked out well (they couldn't care less about the deaths: collateral damage - Condi & Albright (two women I couldn't be prouder of knowing have attained greatness worldwide - you know)) and that Afghanistan is only a few more Friedman units from final resolution/success too.

Will not be watching. Don't have the heart.

Good luck with the call ins. Hope you make a difference.

What we are seeing has its genesis in the failure to bring Nixon to justice.

In any decent country, Rove (and Bush and Cheney,etc.) would be standing trial for war crimes.

But then in any decent country there would be a guillotine set up on Wall Street.

Did you see Brokaw's "treatment" of the 60's? How america was "turned off" by the excesses of the left (all of us dfhippies)?
He was tolerable as a talking head... reading pre-written scripts on the nightly news....but calling him a journalist in any sense of the word is a major stretch. I predict 9 innings of softball....no matter how many emails hit NBC's trash bin...

Tom Brokaw. Jesus. I'm going to be sick, in advance.

I just filled out the comment form for NBC: http://www.nbc.com/contact/general/?__status=1

My message: I will be listening with great interest to the questions that Tom Brokaw asks Karl Rove. I will be asking myself "has the public been served" by this interview. If Karl Rove lies, will he be asked about the public record that contradicts his lie(s). Are the networks acting as vendors for the rich and powerful or are the networks serving the public interest?

Hmmm... War cheerleader interviews guy who used the war to win elections.
Frost/Nixon it ain't.
Hell, Stewart/Thiessen was far more journalistic then what I would expect from this Sunday's book promo/Bush Cheney apologist tour.

Wait, is this a trick question?

Brokaw has his moments, but he's very establishmentarian. I'd love to be proven wrong, though.

Which one holds him up while the other boots him repeatedly in the plums? Metaphorically, that is...

Must be PEE TV!

The prose of this is sheer poetry. I think I just feel in love.

Hate to ruin the aura, but Brokaw could just sneak me in and let me pimp slap the shiat out of Rove on National TV?

Could that happen in the Better Universe? I'm gonna close my eyes and dream that it could.

To sleep, perchance to dream...

I bet Tom Brokaw will get him slippers and a pipe and a snifter of cognac before he asks him a hardball question.

I don't think Tom Brokaw got where he did in MSM questioning authority and I doubt he'll start now with Karl Rove, but I would love to be surprised.

Well, I hope he does better than Charlie Rose just did. Rose is good for film discussions and the like, but can't handle liars. Rove played Rose about as well as Cheney used to play Russert. My favorite line came when Rose asked about leaving Afghanistan for Iraq. Rove got indignant, and said it was specious and insulting to our military that they didn't do all they could in Afghanistan. Yeah, nice straw man – and the Bush/Cheney/Rumsfeld decision to deplete the military in Afghanistan for a war of choice had absolutely nothing to do with it... It is cute how rabid conservatives clean up their act a bit when they go on NPR and PBS, though.

Throughout, Rove pretended that Bush didn't want to go to war with Iraq, that they didn't fix the intel (he mentioned Silberman-Robb), and that the Dems had the same original intel the Bushies did. Hell, Angler chronicles how Cheney even lied to Dick Armey (normally a scumbag, but reluctant about invasion) to get their glorious, glorious war.

Rove's only regret continues to be that he wasn't more of a lying, ruthless asshole attacking critics of Iraq, especially during the 2004 election. On domestic issues, his main attack was the familiar concern troll move – vote for health care reform, and you'll lose re-election (David Brooks and Tony Blankley tried the same move today).