One Of These Things Is Not Like The Others 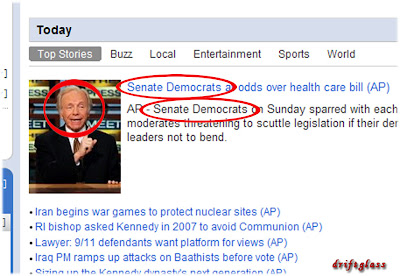 One of these things just doesn't belong,
Can you tell which thing is not like the others
By the time I finish my song?

Holy Joe Lieberman is a man of many parts.

He is a sleazebag, a warmongering Neocon, a sanctimonious backstabber, "Armageddon" John Hagee's

a serial betrayer of the leaders

of the Democratic Party

...and many other things which could not be adequately described given the family nature of your publication.

One thing he emphatically is not is a "Senate Democrat".

Perhaps as they clean out their desks and make their way out the door, one of your many hundreds of newly laid-off reporters could pass along to you that portion of their notes which detail the recent political history of Joesph I. Lieberman wherein he:
Which means, as I said, despite the fact that Senate Majority Leader Harry Reid and President Barack Obama both still inexplicably seem to want to have his babies, Joesph I. Lieberman is not a fucking Senate Democrat, and is most certainly -- as your strange photographic juxtaposition suggests -- not THE fucking Senate Democrat.

I hope this clears thing up.

My favorite part is that the Joe Lieberman party actually kicked him out after the election.

i STILL think someone should shove a shrimp covered in ham, with a cheeseburger down his throat

And SOMEONE NEEDS TO WRITE A BOOK about how the media cooperates with the status quo, whatever that quo is, for ratings and money. One way to do that would be to, oh, focus on the Sunday Morning Talk Shows over the course of the second Bush administration 2004-2009.

I have no idea who would have the guts and archives to write such a book, but my sense is libidinous liberal lasses would love it, and the author might get a bottle of decent scotch from his agent, if nothing else whatsoever.

Lieberman (D-Israel)is only doing what he's been paid to do.

Frances, iirc, that was wuite the explicit sub-text of Stewart Ewen's Captains of Consciousness, also of Chomksy/Hermann's Manufacture of Consent. Ben Bagdikian, way back in the mid 70s, was all over that too. And another cat, Michael Schudson. Hell, Michael Parenti has mostly made an invisible career of shrieking that message into the wilderness...

The books have beenout there, but for some reason that message doesn't draw the same kinds of hype as do the maunderings of some incompetent, dishonest parvenu...Go figger, huh?

That's gold, that is.

Joe Lieberman can send my pulse racing from normal to near aneurysm in seconds without even trying.Or apparently caring.
It's what he does.