"Perhaps," I tell the cat, "if you were just a better manager?"

The cat, being a poor manager, refuses to reply. 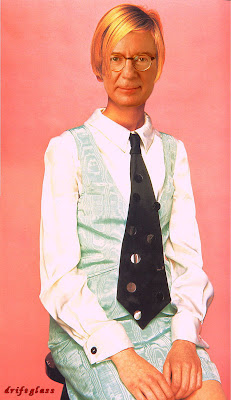 continued to tell The Man to go to Hell in his own counter-cultural, fashion iconoclast way. 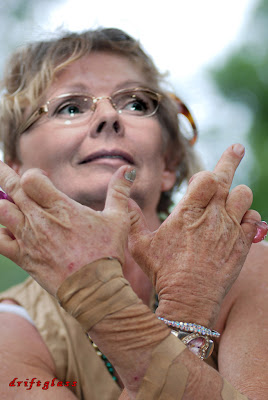 continued her own, bold late-life experiment in career-reinvention, moving ever further from parceling out her sentences in the Gipper-Whisperer-mode of her earlier days, out to the ragged edge of insanity where every answer consists of stabbing whatever question is asked to death with full-on, unpunctuated, blank-verse, condescending Dadaist nonsense.

Stephanopoulos: What about this segment of the GOP base – these teabaggers – who are just fucking nuts?

Noonan: I think the whole thing is exaggerated. And I don’t know about this seabiscuity woodshavings cohort idea of calling them “teabaggers”. We had this Imogene Coca August Awakening of independents, spinach eaters, sheet-folders and some Democrats saying, hey, we don’t like stuff that’s going on around here!

Elsewhere, David Gregory freaked out the Republican Junior Douchebag from Arizona John Kyl by asking him an actual question:

GREGORY: You know, it's interesting, Senator Kyl, in that vein, in terms of this kind of moral imperative, you and other Republicans have said this healthcare reform should be opposed, and one of the major reasons you cite is how much money it costs, how much it could potentially add to the deficit, although the president says it'll be deficit-neutral. And yet when you talk about the war in Afghanistan and the commanders should have more of their troops, I've never heard you say that that should be deficit-neutral, that war costs should somehow not break the bank. Why is that disparity there?

to which Kyl replied:

Meanwhile, on Fox News, one current Republican, one former Republican and one wannabe Republican "debated" health care, with John Thune winning the "Repeating the phrase 'Government Health Care'" contest 177-to-2.

Then came 15 minutes of ominous organ music and inconsolable weeping as Karl Fucking Rove whined about how unfair the White House was being to po' po' Fox News, and how Nixonian it was for a White House to target members of the press:

A. Fox is not the press. Fox is a wingnut whorehouse. And,

B. My what short memories the droolers have. From 2003, Slate:

...
At his televised news conference last week, President George W. Bush deliberately snubbed several reporters he ordinarily calls upon, including journos from the Washington Post, Newsweek, and USA Today. But the most conspicuous recipient of the 1600 Pennsylvania Ave. freeze-out was longtime UPI reporter Helen Thomas, who has barbed and grilled every president since John F. Kennedy and almost always gets to ask a question. Bush pointedly ignored her.

Bush then dealt Thomas a second slight. By custom, Thomas concludes White House press conferences at the president's signal by saying, "Thank you, Mr. President." Bush denied her that supporting role, ending the conference with his own sign off, "Thank you for your questions," and flushing a decades-old White House custom.

Bush's slaps at Thomas are consistent with the psy-ops his information wranglers conduct day-in and day-out on the White House press corps. Bush's news conferences have become increasingly scripted, with the president calling on reporters from a preset list and refusing the follow-up questions that might trick him into saying something substantive. Press Secretary Ari Fleischer has lobotomized the White House press corps in official briefings by jawing more and more and saying less and less. (The smarter reporters play hooky these days rather than endure Fleischer obfuscations.) Last October, Fleischer maliciously tampered with the corps' self-esteem by reassigning seats in the briefing room. The new chart demoted scribes from Time, Newsweek, and U.S. News & World Report from the Park Place of the second row to the Siberia of the sixth. (Pressies live for their little perks, and the White House reporters revealed their Ted Baxterian pettiness for all to see when they bellyached about the reshuffle.)
...

McAuliffe: Fox does opinion stuff. President Obama gets that.

Nice that McAuliffe is now an official confidante of the President.

Wallace: But last year, during the primary, you kissed Fox News’ ass. Lets roll the video.

McAuliffe: But you have to remember, Chris, that I am a huge whore. I’ll knob anybody who pays me.

Wallace: ABC went after Clinton during the Monica Lewinsky happy-fun time, so just because we call Barack Obama an uppity Commie Negro usurper, don’t you think its unfair that he won’t come on our little teevee tree fort?

McAuliffe: It was a different time back then. Mastodons walked the Earth. Nightline didn’t suck.

Wallace: With all due respect, you’re not an administration official.

McAuliffe: Obama’ll come on Fox. He’ll be on your show.

Rove: I’d rather not interrupt Terry as he wallows in his own shit begging to fill the Fox News Susan Estrich Boozy Fake Liberal Chair.

McAuliffe: Please can I have my wine now?

I know. I can't stand that my favorite show, House MD, is on Fox.

And Fuck the Fucking Yankees, their loss to the Angels delayed House MD by almost an hour last night.

The castle wenches must miss you on their furlough days, Sir. Not a thing to do to while-away the time...

And yeah Terry looked a little lost without his rum bottle. I imagine the DT's help him stay on message in Wallace's studio. That explains a lot.

House is also my favorite show, Blue Gal (loved the "dead" patient waking during the autopsy), and I'm a fan of the occasionally anarchist Simpsons. Damn that Fox!

Over the last year, I've just lost desire to watch the Sunday shows. I catch them perhaps 10% of the time, so bless DG for his writeups.

And the Photoshop images? Quite the talent, Drifty, even if it often veers into disturbing, inappropriately-erotic overtones. Maybe BECAUSE they are so disturbing (Kristol the Clown still gives me the Stephen-King-like creeps).

That Photoshop of George Will looks disturbingly like Andy Warhol. With orders of magnitude less artistic talent than Warhol has. Now.

Thanks for staying on message while all others fall into the soap opera fray.

Your prose is so rich, I can't make a decision as to which jewel to cite (for your space considerations).

Read it all over again, folks.

Tears streaming down face not knowing whether I'm crying or laughing with joy,

Georgette? Georgeina? There goes my dinner...and my abilty to ever have sex again...in one swell photoshop foop...of a fop.

you are tremendously good at making me laugh