Yes, There is a Club 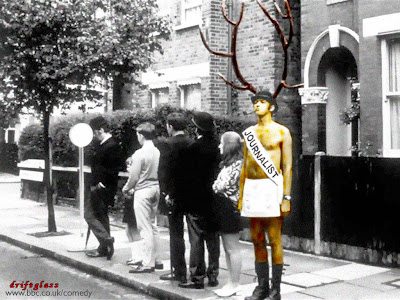 So Serious Journalist Joe "Jokeline" Klein has been busted -- again -- trashing Glenn Greenwald's competence, honesty and honor, this time in front of several hundred of his closest friends but behind the digital hedgerow of a 'Members Only' journalist club from within which Joe apparently though it was safe to run around pantsless and snipe at his colleague with impunity.

The whole thing is certainly worth a read, but in the middle of this insightful slamming of Jokeline's journalistic head into the Lockers of Justice, your humble scrivener could not help but notice this:

...
The second incident happened yesterday. Klein belongs to "Journolist," a secret online club where several hundred liberal journalists, pundits, bloggers, editors, policy experts and the like gather to discuss various matters, all organized by The Washington Post's Ezra Klein. It includes some of the most influential people in the profession. I'm not a member and never have been.
...

At which news one can only shrug, laugh

and be reminded that while the world is full of velvet ropes the grubby, street-side of which most of us find ourselves most of the time, it is a supreme and specific irony of the Left that the bouncers guarding our exclusive clubs and cliques are all wearing tee-shirts that say "Grassroots!" on one side and "Liberté! Egalité! Transparencé!" on the other.
at September 02, 2009

Joe is parading around as a "liberal".... since when? Also, you can tell they have a "club" because once they decide how to drive their blogs all the same posts all over the place. It's really quite easy to spot..... especially during the primaries last year.

it is a supreme and specific irony of the Left that the bouncers guarding our exclusive clubs and cliques are all wearing tee-shirts that say "Grassroots!" on one side and "Liberté! Egalité! Transparencé!" on the other.

Can you believe that after all these years there are still people who name-drop the "Townhouse" list? I'm sure that after they do so, they fret about whether there is a "VIP" version of the list for which they're not on the distribution.

I can honestly say I wouldn't hang around that motherfucker Joke Line if he was at a bus stop and I ran into his ass, I would walk first.

Klein was one of the first to chase Clinton for the spurious issues like Whitewater, etc., after he was elected, publishing Primary Colours (which was ghosted in part by that other Clinton lover, George Steponallofthepopulace).

But he's still a librul. Just ask him.

If you ask me, these are the people entrusted by the rightwing powernuts who decided to dishonor the concept of liberal governance by the spreading of falsehoods, and solidify the conservatism of Ronald Reagan, the power-worshipping GE altar boy.

all organized by The Washington Post's Ezra Klein

What really gripes their (the Village media elite's) asses is that, slowly and surely, Glen Greenwald, Marcy & FDL, and KOS are creating their own "club" of intelligent, rational and honest journalists.

And Jokeline will never, ever, in a million-billion-trillion years, be invited. Nah! Nah!

And Klein's "remembrance" of Teddy in this week's TIME is a bigger POS than my craptastic free-from-ATT Wireless-with-useless-rebate-and-2-year-contract Samsung flip phone. Hint: been hunting around for juice cans and spare wire.

Hi,
You have a great blog! Keep up the good work!

You know our politics have become distorted when a center right blogger like Joe Klein is referred to as "liberal" so often even blogs start making that same factual error.