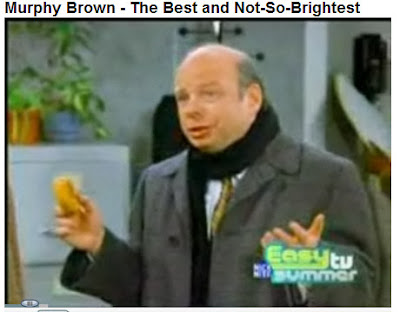 I rarely post full-length videos of anything (the damn thing kept auto-starting no matter what I did, so click here for link), but as an amalgam of almost everything that turns my stomach about American politics and the Mouse Circus, this episode of "Murphy Brown" from 1995 is just too depressingly and hilariously prescient not to share in its entirety.

14 years ago and it was all there: Limbaugh, Gingrich, looking stuff up on "the Internet", the "Liberal Media Elite", all afloat in a wishful fantasy that somehow both sides were equally wrong and we could all work together if only the Left bent over a little further.

Wallace Shawn positively heists the show playing Stuart "All's I Know" Best with a gleeful, itchy Willy Loman-desperation. Stuart -- a failed, irritating and mostly-forgotten media celebrity -- returns as newly-minted (Or DeMinted) Republican Congressman Best, who ran for office only because he wanted "a full-time job with a pension and a health care plan" and didn't realize until too late just how dangerously crazy his supporters actually were.

If you want an explanation of everything that has gone fatally wrong with American politics in under 20 words it is this:

That episode certainly has it all. Sad thing is, all these years later, the Stuarts and their fellow Pubpublicans are now leading the entire party....all the way down to the end of the tracks in Crazytown.

There's more than one reason I bookmarked you, dammit. Would you please write a novel? Also such as, could you weigh in (again?) on Jonathan Krohn?

My wife and I quote this one all.the.time.

Especially pathetic: "I just wanted a job with a pension and a health care plan. . ."

Who knew that this episode was an actual documentary?

Drift, I believe you have describe it accurately.

The question is, what do we do now?

With Obama caving on the pubic option and talking about "the extremists on both sides", I make it that progressives are stuck where we always are; helping a democrat get elected who talked about giving us real change and then it turns out the "change" is
a nickel and two pennnies.

I say, he can keep that change and I just hope that there are enough dems in the house with their consciences still intact, to block a watered-down, healthcare industry approved, "reform" bill.

What's scary, is that the issue of dealing with the obscene amounts of money that are made off of sickness and ageing in america, are going to be very secondary when the twin shitmires have moved from the political back burner to front and center. When that happens, it's going to be crunch time in a way that will make the debate on healthcare seem like a bridge party. As it stands now, we're basically looking at Obama's policies on those as being Bush-lite, if we're lucky.

A year from now, in fact, probably sooner, the political climate is going to be of an intensity that we may not have seen in a long, long, time.

Here it is on HuffPo, from Robert Borosage:

Can't say it much better.

Sorry, I forgot we can't hilight the link for a click, here.

But it's up on HuffPo. Just go there and scroll down.

Thank you very much for caring about audio auto-starting. Once again, it shows true refinement.

I was actually digitizing vinyl, in a mode that could have been messed up, but fortunately I was between recordings.

It's like designing controls/interface correctly. There are those who will understand intuitively, and those (unfortunately many in design positions) who never will, who don't even know there's something to understand....