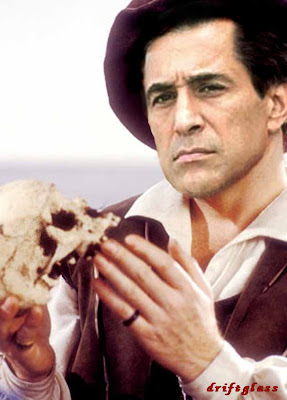 "Angels and ministers of grace, defend us!"
-- Hamlet, Act 1, Scene 4
Yes, aggrieved beyond his ability to contain himself by the out-Heroding Herodic awfulness of the "Chicago-style politics" of a certain White House Chief of Staff, Representative Darrell Issa (R - Persecuted Whitey Falls, CA) donned his nighted colors, mounted his trusty hobbyhorse "Lamentation" and rode his own, personal Trail of Crocodile Tears all the way around D.C. and back again.

It was all vewy, vewy sad (From NBC News):

The ranking member of the Committee on Oversight & Government Reform, Darrell Issa, is taking issue with the invective-spouting, political superstar from Chicago known as Rahm Emanuel.

Issa is upset over a series of reports that the White House Chief of Staff has been orchestrating an effort to intimidate members Congress and Governors who speak poorly about the stimulus program.

“I and others have dared to bring these facts to the attention of President Obama, the Congress and the American people,” Issa wrote. “You’ve unfortunately reacted by once again resorting to the playbook of the Chicago political machine.”

Issa’s language can be tied directly to a Politico story that said Emanuel “launched a coordinated effort to jam” critics of the plan. The “jamming” amounted to Emanuel asking Cabinet members to write letters lambasting the naysayers.
...

So as you can see, stripped of all its sackcloth, ashes and stigmata, Representative Issa's outrage boils down to the fact that the Chief of Staff has gotten some Administration officials to write mean letters like this to some of the Republicans who have been trying to kneecap the President's stimulus package.

On Sunday, Arizona Senator Jon Kyl publicly questioned whether the stimulus is working and stated that he wants to cancel projects that aren’t presently underway. I believe the stimulus has been very effective in creating job opportunities throughout the country. However, if you prefer to forfeit the money we are making available to your state, as Senator Kyl suggests, please let me know [emphasis added].

This, according to Representative Issa... 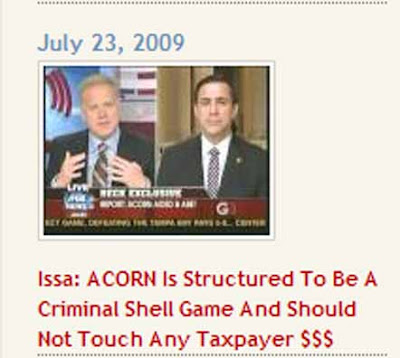 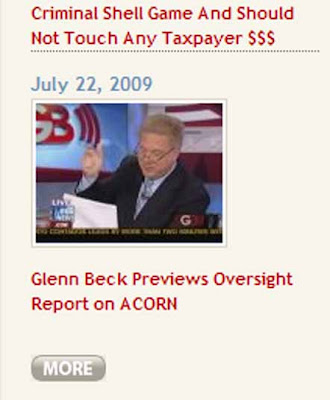 ...is apparently a textbook example of the horrors of "Chicago-style politics".

No, Representative Issa, writing stern letters would be a textbook example of Minneapolis-style politics.

Chicago-style politics, on the other hand, would be if Rahm Emanuel showed up in the House parking garage and proceeded to wallop you in the head with a snow shovel while screaming "Who you think you faaaahkin' with, Issa!" until you stopped twitching.

To be fair, Representative Issa might have had more to say on the subject that I just couldn’t hear over the bellowing of the wind-up Flying Patriot Monkeys his Party’s corporate sponsors have dispatched all over the country to drown out anything resembling reasonable debate over health care.

I really do hope we live to tell the tale…

Oh and don't forget they hate socialized medicine but they just love Medicare!

Issa does represent the best of the rightwing nutters in SoCal. Best being a subjective term.

Stern letters > using your bought and paid for huge wurlitzer to endlessly disseminate outright lies, slander and distortions about anybody or anything that you don't like.

now now, be nice to poor ol' Darrel - after all he greased the screechin recall machine out here in granolaland - and then weeped when Ahhhh nuld stepped in and schtupped him out of the Governor's chair, that and poor ol' Darrel had to make niceypoo all those years with his Congressional next door neighbor - the Dukester.

What lostnacfgop said. Also, Issa has always been a big, steaming pile of manure.

I'm waiting for the first serious violence from the proto-brownshirts disrupting the townhall meetings on health care.

We're seeing the death throes of white supremacy. The election of a non-white to the White House, and now a Latino on the Supreme Court, is simply shattering the "whites rule" worldview of some people.

Given his supposed reputation, I was half expecting Rahm to go after the worst of the Pug morons and Lapdogs with a Louisville Slugger and "entoosiazem...entoosiazem". Instead, he's leaning hardest on the progressives. Rahm needs to get his targets sorted out.

Darrell Issa is scum. I don't feel the need to point out WHY he's scum, either.

And yes, this IS the death knell of the white racist, misogynist, homophobic fucks who have ruined our country for almost 4 decades now.

But getting RID of them is NOT over.

There's a lot of challenges left to us all.

And it WILL end with us in the streets, once again.

Or we'll lose it all. And the past 4 decades will go to the corporate feudalists, forever.

Our choice. Do, or die ugly.

'K, bonus hoss for Tears For Fears and Shout.

One of a few back then that had sig for the masses.

Those were some wasted daze then, pop wise.

Course all pop is wasted art, IMHO. But it CAN be used to tell the history. Watered down, of course.