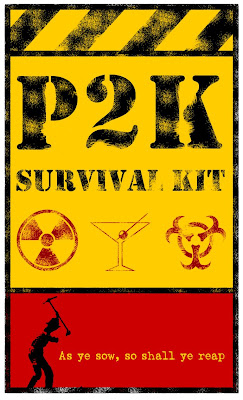 Looks like I fixed that P2K bug just in time.

So this is post 2,000, which is a pretty big number. Big enough to be divisible by lots of other reputable numbers, including 1000, which I’m sure is somehow meaningful if you squint at it long enough.

It also means that I have done, on average, around 1.3 posts a day since I started, which explains why I feel like the morning after an alien probe: I’m tired, don’t know what day it is, and my ass hurts.

For the occasion I went back to The News Blog -- my old home place -- to do a little reconnoitering and see if I could find anything of my misspent, uh, youth.

Walking around the old site made sad, as it always does, to see the words hanging there still vibrant and true as they ever were, while at the same time knowing that no more midnights will ever toll when I can come past Steve Gilliard's site confident that he’ll have just laid out yet another freshly BBQed, blogosphere-agenda-setting haunch of Jonah Goldberg, David Brooks, Victor Davis Hanson, Rich Lowry or Michelle Malkin.

In the end I did find a little something to use today; a comment I left there and Gilly promoted to his front page from back in Thee Olden Days when Liberalism was flat on its back, Steve's powerful writing was keeping a lot of us together, focused and strong, and he was running his comment section 24/7 as the best kind of unabashedly raucous, Dirty Fucking Hippy troll smackin' (Hi, Bloomie!) road house.

All gone now -- June 2 will be the second anniversary of Gilly's death -- but never let it be said that we didn’t stomp upon the terra.

Because we did. We surely did.

IMHO it’s as simple as: “Never jump into bed with someone who’s crazier than you are.”

For the Suburban Gated, the non-deranged gunnies and the Tax Cuts Uber Alles Republicans, it’s all jolly good fun having a romp with the Fundies…as long as they keep delivering the 20% margin the GOP must have to win anything and as long as they stay the fuck away from my house and family, its all just good kinky fun…

…until the sun comes up, and you realize that the Electoral Candy you were offered was just bait to get you into the Windowless Fundy Panel Truck.

And now you’re waaaay out in the country somewhere you don’t recognize without your pants, and you start to figure our that all the Burning Crosses and Swastikas and Apocalyptic Paraphernalia that tricks out the inside of the van isn't tatted-up Goth Chick posturing.

And Randall Terry and Tom DeLay wave to you from the front seat and say, “Mornin’ shug! Get ready; we gonna burn us some ‘a them Christ Hatin’ Abortionists today.” Or Fags. Or Negroes. Or Liberals. Or Ay-rabs. Or Jews. Or, really, anybody.

And all of the slack-jawed yokels who were so eagerly helpful while you were passing you’re Lovely Tax Cuts are sitting around you giggling…and armed to their snaggled teeth.

And then you hear, “Bring Out The Gimp.” (Which, for my money, should be the Democrats’ Lead Media Message for the next four months.)

Oh. God. You mean these crazy fucks were serious? Like, really, really serious?!

No shit they’re serious, Suburban Weekend Bad-Ass -- and it's not exactly like you weren't given Ample Warning: Now they have your shriveled nuts in a razor-lined C-clamp, they want the very high interest vig on the Electoral Loan they made you to pay for your Optional War and Drunken Safety Net Shredding Good Times.

And now here we are, 2,000 essays later. And taking a very rough, back-of-the-envelope stab at guesstimating the length of a typical post while factoring out tags and code and clips from other sources, I figure that means I have stitched together somewhere between one and two million words (to be fair, they were mostly typos and variation on “fuck”) on this site since the day I hung out my shingle.

Which means, in terms of quantity, I have finally beaten that fucker (see, I told you) Shakespeare (The definitive concordance puts Shakespeare’s complete works at 884,647 words).

However, in term of quality, given how far into the stratosphere the bard set the bar on every subject from seduction:

"That man that hath a tongue, I say is no man,
If with his tongue he cannot win a woman."

-- The Two Gentlemen of Verona

"All the infections that the sun sucks up
From bogs, fens, flats, on Prosper fall, and make him
By inch-meal a disease!"


Moth: They have been at a great feast of languages, and stol'n the scraps.
Costard: O, they have liv'd long on the alms-basket of words.

I daresay we will all be standing safely in the Great Man’s magnificent shadow until the end of time.
at May 29, 2009

Milestones or millstones?
Or just stones in your shoes?
Rocks in the head?

Whatever they be, You Got Stones and you absolutely ROCK!

Steve's powerful writing was keeping a lot us together, focused and strong, and he was running his comment section 24/7 as the best kind of unabashedly raucous, Dirty Fucking Hippy troll smackin' (Hi, Bloomie!) road house.

they want the very high interest vig on the Electoral Loan they made you to pay for your Optional War and Drunken Safety Net Shredding Good Times.Rocks off!

I have enjoyed most every word. You have a way with angry turns of phrase that give me the hot fuzzies.

May paying gigs rain upon your keyboard!

in chicago
there's a lot to write about
you got daley, burris, blago
they all stink

ok ok ok, i apologise to the proclaimers. i also ran out of skill before finishing it off.

that's the biggest difference between me and drifty.

that boy always flogs his themes home with skill

Foe of the dark side?

Two thousand posts is a veritable avalanche of verbiage...and, coupled with your eye-popping photoshops, makes for a prodigious amount of time spent on this li'l ol' backwater blog which just happened to deserve a SHINY NEW WEBLOG AWARD for contributions above and beyond the competition. Once again, I salute you.

As I recall, I found my way over here initially from a link at Johnny Amato's Crooks & Liars several years ago...and I've been unable to stay away ever since. You keep my outrage circuits near overload levels and tickle every one of my funny bones in the process: That's some serious literary sorcery you wield, My Good Man; I remain awed and thunderstruck in your imposing presence.

And you're only getting better.

As was noted above, you ought to have a writing gig that can pay the freight with much less abuse than you've been tolerating for FAR too long now.

Well, happy 2000th, you hoary old fucking veteran. You've been in blogging almost as long as I have. I have no idea how many posts I've written since every few years I torch my blog like a departing Hun conqueror then get sucked into the madness yet again.

You've managed to do something I never had the patience or the fortitude to do: Keep it together at the same bat place, same bat channel or keep sticking it to the 27 percenters like a fornication machine on double time.

It's guys like you who force me to be a better political blogger. And I can only say that about 3 or 4 other guys.

I look forward to the next 2000. In fact, I'll be linking to this article.

Congrats on the milestone, motherfucker!!

No one combines eloquence and outrage the way you do, Driftglass.

Congrats and BRING ON THE NEXT BATCH!

I want a first edition SIGNED copy of yer book too, make a note of that.

Thanks for all you do bud.

Congrats, drifty! I can't saw how many times you've made me weep and laugh at the same time: an oddly cathartic experience. I mostly don't "get" Shakespeare, and have never waded through one of his works without hearty meals of Cliff Notes. And "The Tempest" isn't one of those. But hey, driftglass thought it was worth putting up with the caption ""troll-shredding." So I read it. And I didn't get it. And I read it again. And I still didn't get it. So I carefully, slowly, and quietly read it aloud to myself, trying to figure out how those words assembled into a thought. And I did it again.

And burst out laughing, drawing looks from other coffee-drinkers around the room.

Thanks drifty. Sometimes I don't get you either. But it's always worth my time to make the effort.

What JP said. You make us all better bloggers. Thanks for that, and here's to the next 2K.

"Typed and linked this with my toes, took 3 mins, rock on" is still my all-time favorite post, though. ;)

Off-topic: The state of Georgia is still trying to execute a man whose guilt is dubious at best:

and every bit of the way it's been the best gawwdamn read from paper to pixel.

2k posts you can be mighty proud of, we should add.

I remember reading more than once in the GNB comments Gilly pushing you to start your own blog and join the cause! And look where you are now!

Your a role model for this humble and infrequent poster!

Thanks for what you do -- and how well you do it!

The second anniversary of SG's death makes me sad, though.

“Never jump into bed with someone who’s crazier than you are.”Someone should tell that to Newt, who now seems to have gone The Full Tancredo. Newt was always a phony and an asshole, but his coffers must be positively echoing, because he seems to have gone completely 'round the bend. I can't wait for 2012.

Congrats on the first 2K, Drifty, may there be many more. Thanks for all you do to keep the flame burning.

how you do it, I don't know, but it's a gift and I'm glad you share it

You're still my biggest intertoob crush.