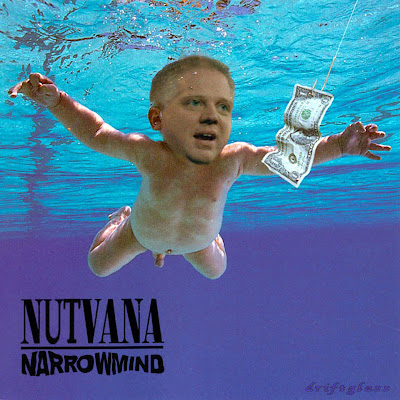 Yes, Spring is in the air my friends.

As Mr. Outside Rush Limbaugh and and Mr. Inside Newt Gingrich return once again to the business of getting rich chumming the political waters with the bloodiest gobbets of crazy they can find...

As 30 million pig people begin stretching their minority Party tantrum muscles anew, get up on their hind legs and learn to scream "Gummint! Destroy! Gummint! Destroy!" again after eight straight years of lockstep, synchronized chants of "How dare you question the Dear Leader!" ..

As bile-laced AM radio frequencies burst at the seams once again with hysterical, unhinged conspiracy babble, roared out in blunt, declarative "Democrats are Commies", "AmeriCorps could morph into "re-education camps", "Obama is the Anti-Christ" sentences...and received as Operating System Upgrade gospel by the ignorant armies of the Right...

As a centrist President elected to clean up Republican failures is once again immediately painted as History's Greatest Villain who must be stopped at all costs almost before his feet touch the ground...

As the fragile brains of right-wing gun nuts being snapping like twigs under the weight of their mindless fear multiplied by their stupid (Check out this terrific analysis of the subject by David Neiwert over at Crooks & Liars):

David Weigel of the Washington Independent was out at a gun show in Tennessee this last weekend. If you haven't gotten a look, you should.

It's real real familiar for me. Deja vu from 1994, when I was regularly attending militia meetings, all over again: The president-bashing. The gun fetishizing. The paranoia. The unstated old bigotry. And sometimes, all of them would come together at once.
...

Because for Republicans, the last eight years never happened (From Andrew Sullivan, which, I know, I'm shocked too, but if we are to credibly administer ass-kickings when he's wrong, we must acknowledge when gets one right.)

The remarkable thing about today's partisan Republicans is their capacity to forget instantly and entirely anything that went on for the past eight years. And so suddenly we are rushing toward socialism, even though by far the biggest jumps in state power and debt occurred under a president they worshiped and worked hard to re-elect.

There were no tea-parties to protest the $32 trillion Medicare prescription drug benefit. There was no Randian rumbling as Bush took over local schools. There was no defense of the Constitution as Bush and Cheney secretly suspended the fourth and first amendments.

But put a moderate Democrat in office tackling a historic collapse in demand - and spending must be frozen! Reading the partisan right blogs, this ability to disappear the past is striking, and it helps explain base GOP loathing of Obama

But this time around the track there are some important differences.

This time we have the eight years of 1,000-decibel insanity ginned up over fake scandals capped off with impeachment over trivia that was the Clinton Administration behind us.

This time we can look back and see what categorically does not work.

Ignoring them? They only get louder.

Appeals to reason? Bwahahahaha! Are you fucking kidding me?

Appeals to the good of the country? Republicans don't give a shit about this country. They give a shit about their country: the The Caucasian Free State Of Jesusland. And to whatever extent the actual America and its actual constitution and history and pluralty and complexity frustrates and impedes the implementation of the New Confederacy of their dreams, that is the extent to which they will always despise the real America.

They will never change. Never.

They cannot function without someone to hate and blame for the horror of their miserable, superstition-girdled existence.

And because they won't, we must.

From Congress to our local PTAs, we have to stop playing nice. We have to stop pretending they'll go away, or sober up, or that they're kidding, or that someday all of that being bugfuck nuts 24/7 will get wearying and they'll take up another hobby.

They have spent decades, vast sums of money and considerable effort going out of their way to earn our loud, rude, sustained and public contempt.

And I urge every Liberal in America to take it upon himself or herself sure Conservatives are paid what they've earned -- in full and with interest -- no matter how long it takes.

Things never really change, do they. I mean we have newer this, and fancier that, but we are still just talking monkeys, and the uber-conservatives are the crazy talking monkeys with fear in their hearts, and the blind faith that whatever they believe is true and right, even when they are proven wrong.

And this is what makes them both frightening and powerful.

"They give a shit about their country: the The Caucasian Free State Of Jesusland. And to whatever extent the actual America and its actual constitution and history and plurailty and complexity frustrates and impedes to the implementation of New Confederacy of their dreams, that is the extent to which they will always despise the real America."

Thank you for that quote. It's nice to realize truth, isn't it?

But what can I do? Really? I don't have enough money or influence to make a difference.

It's great to have sites like yours to remind me that I'm not alone. Daily Kos kept me going during the craziness of the campaign, and now I've discovered you and others. But the Bachmanns and Becks and their ilk drive me to distraction!

That photoshop of Beck's face on the baby body is eerier than most because it looks like it actually belongs. His innocuous baby mouth spewing hate and violence inducing rhetoric is chilling indeed. I don't know, really, what we can do to counteract teh crazy this time, but one thing I know is that we cannot just sit back and think everything is OK now that Obama is in office. We must be vigilant constantly and trigger ready to call bullshit on the unhinged minority, because when we don't they gain traction.

Yeah, Dr. D, it looks like you're going to have to stock up on those heart-punch adjectives and Tombstone Piledriver nouns of yours. We're just a bare hundred days into Barack Obama's term and rightwing crazy is already off the charts!

I can already see the escalating gun violence of the ones you have dubbed "putty-eaters," stoked by professional liars of the non-stop Partisan Pandemonium.

Where do I being? How can I describe the magnifiosity of your political verseplay?

So much brilliance to choose from.

return once again to the business of getting rich chumming the political waters with the bloodiest gobbets of crazy they can find...

Again, spectacabularitous resonance resides within the walls of the castle as you ready your masterpiece.

When will it hit the bookstores?

I really wish you had a "share" function for these. I'd put this rant on my facebook profile for my "friends" to read.

You had to make me put the words "Glen," "Beck," and "Penis" together.

Um, Glenn has been somewhat "overendowed". I trust your 'Shop skillz and judgment, good sir.

I'm just waiting for the next Timmothy McVeigh.

Unfortunately, I work in a Federal building that would be easy to blow up.

Having defected from a long line of Evangelical haters of all things not them...your "The Caucasian Free State Of Jesusland" almost made me freaking spit my coffee out. Heh.

...and apparently I'm a little spastastic today...not knowing how to even enter my name properly. Sorry 'bout that ;)

glenn beck wishes he was that big.....