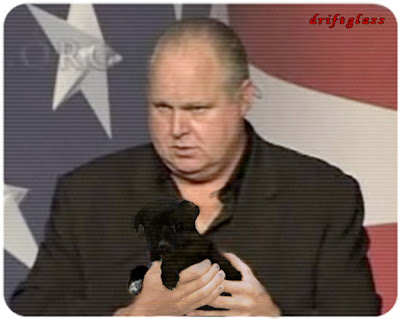 “I will kill this puppy, because I hate puppies and I like killing them.”

How the Pig People react:

Unable to contain their joy, the throngs of hoof-stomping, rat-squealing, true-believing golem known as “The Republican Party” tear their own eyes out so that the torrents of orgiastic rage pouring out of their mouths can get from their brains into the open air that much quicker.

How the Media reacts:

Until, in the end (from the Chicago Tribune):

Barack Obama's push: Make Rush Limbaugh appear to be the face of the GOP

WASHINGTON — The Obama White House has begun advancing an aggressive political strategy: convincing the country that the real power behind the Republican Party is not the GOP leaders in Congress or at the Republican National Committee, but rather provocative radio talk show king Rush Limbaugh.

President Barack Obama, top presidential aides and outside Democratic allies have been pushing the message in unison.
...

Sorry, Petey, but hack reporting like this is exactly why we on the Left have largely given up on the national press except as a Ridicule Piñata; because for the last 20 years, every time the Party of God shit all over itself, Villager reporters -- presumably as a condition of their employment -- could always be relied on to invent some ludicrous unattributed back-story about Democrats secretly slipping “Ex-Lax” into their cocoa.

Because if the GOP painted “I AM RUSH’S BITCH” on their ass in hundred-mile-wide fluorescent letters visible from orbit, the “Fair and Balanced” chip in the Villager’s heads would smoke and writhe and squirm until they figured out how to reformat the facts into a story where somehow Sneaky Liberals were the lead.

So since you obviously have no fucking clue about the modern history of the Republican Party, let me give you the nickel tour.

See, once upon a time, the Party of Lincoln got tired of losing.

And their leaders sat down with many graphs and tables and Pareto charts and figured out that if they took a hard, Right turn at the corner of Loutish Bigot Avenue and Ignorant Christopath Way, they would start winning.

And it worked! So yay them!

But as the massive infusion of xenophobes, degenerate yahoos and wannabe fascists packed on Republican electoral muscle, the immutable Law of Fucktard Fluid Dynamics also meant that demagogues like Rush Limbaugh rapidly grew in Party power and influence, while anyone with an ounce of decency and self-respect was slowly cooked off and driven out of the GOP in disgust.

And that's the thing that makes "reporting" like yours so fucking laughable, Petey: the fact that Rush’s status as Party Overboss has never been exactly what you'd call a big secret.

Hell, it was on the God damned teevee!

If you'd bothered to do any checking at all you'd have found that fourteen fucking years ago -- while a popular but relatively unknown professor named Barack Obama was too busy teaching constitutional law at the University of Chicago to plot out clever schemes to make it "appear" as though the GOP was Limbaugh's personal ass coachman and penis valet -- this was the actual state of the relationship between Rush and the Party of God (Spoiler Alert: video also proves yet again that no one knows "funny" like the Wall Street Journal's own shreddin' comic hellbeast, John Fund!):


This was a marquee Washington Post story about Rush and the GOP from December of 1994:

The House Republican newcomers made Rush Limbaugh an honorary class member tonight, a symbol of their gratitude for conservative talk-radio hosts who championed their campaigns. Limbaugh was presented a "Majority Makers" pin, the emblem of the newcomers who have given their party majority status in the House for the first time in 40 years.

Six GOP women in the class added their own special thanks, presenting Limbaugh with a plaque that said: "Rush was right." And Rep.-elect Barbara Cubin (R-Wyo.) added: "There's not a femiNazi among us."

What has changed in 15 years, Petey, is that out here in the reality-based community we no longer feel alone and powerless to push back when we see a reporter contorting himself into bizarre, partisan configurations rather than simply reporting the simple fact that the Republican Party really has devolved into one, big, batshit crazy hoe-down where Limbaugh calls the tunes.
at March 06, 2009

Fucktard Fluid Dynamics, I actually have some professional engineering experience with that...

and nice William the Bloody Cameo...

Fucktard Fluid Dynamics, I actually have some professional engineering experience with that...

and nice William the Bloody Cameo...

Truly we live in bizzaro times whens the pig people can say that they're taking it up the ass sideways from Rush the criminally insane drug addict is somehow Obama's fault and have it reported in the not-dying-quite-fast-enough librul media as truth.

Wow, which stage of death is this?

Yet finally, finally, it appears that the ONLY ones listening are their own true asshats. The squishy middle and the rest of the relatively uninvolved populace seems to be watching these idiots on the TV box and saying to themselves, "Bullshit." It's amazing how you can concentrate the mind by economically crushing folks...

When Michael "Not the Man of" Steele had to bow down and worship Oxycontinass King of Kings, it was one of those carnival-geek/bad-sex-show moments that leave you thinking "What the hell am I doing even watching this?"

One day the media will figure out what Obama already knows — that in a nation of 300 million, you can be very unpopular and still have an audience of (probably less than) 20 million.

Could we use some icon instead of the asshole's picture. His picture makes me sick to my stomach.

pwapvt asks "Wow, which stage of death is this?"

The party of privatization gets privatized. No-bid contract and all. That's awesome.

Already, I wet the Depends.

But it's not just "over there" anymore: Just listen to the butt-head obstructionists (Limbaugh The Fatulent, Gingrich the Flatulent, Michael Steele the Knee-Padded Wimp-ulent). It's pure Milton Friedman economic shock therapy.

But back to the original topic:
Thank you, Mr. Driftglass, for telling Petey at the Chicago Trib what kinda sh*t makes wood termite shingles.

I actually believed The Enforcer - Rahm Emmanuel - was behind the Bifurcate Limbaugh's Fat Ass and Conquer the GOP Strategy. Nay, I was proud of it!!!

In fact, you're prolly right. It's the brain dead media who MUST find a connection to Democrats in power.

On the other (5,000th hand), it always PO'd me to treat Evil Karl Rove as an all-powerful master of the universe. It gave that SOB the air of invincibility.

And that's even knowing for a fact that Karl Rove DID cause the Spanish Inquisition, the 1918 Deadly Influenza Outbreak and developed the airborne vector for Ebolla Zaire. Really.

Thanks for piercing the veil.