I'm Sure This Will End Well 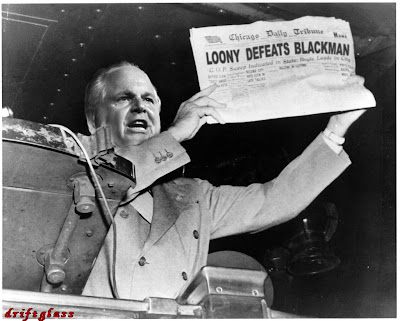 As the Party of God "cranks up the crazy and rips off the knob" (h/t Colbert Report writers), if you want the long-form diagnosis of why the GOP is going so spectacularly down in flames, I commend to your attention Roger Simon's fine essay in yesterday's "Politico":

Why Steele just doesn't get it
By ROGER SIMON

Michael Steele has just dipped his toe into the water and is already in over his head.

Steele has been the chairman of the Republican National Committee for only about a month, and already there is speculation that he may be on his way out.

Steele’s job is really not that difficult. Being a party chairman is not what it used to be. Steele’s job is to raise money and go on TV every now and then and not screw things up too badly.

He has failed at this last task.

Unfortunately for him, Steele actually believes he should be the voice of the Republican Party, crafting its vision and shaping its strategy.

Enter Rush Limbaugh. Limbaugh has his own voice, his own vision and his own strategy. And the real trouble for Steele is that Limbaugh understands the core of the Republican Party — where it wants to go and what it wants to do — far better than Steele does.
...

If you want the shorter version, here it is:

The
Problem
With
The
Republican Party
Is
That
It
Is
Full Of Republicans.
at March 08, 2009

Krugman is right. The ReThugs have become the party of Beevis and Butthead.