Take all your overgrown infants away somewhere
And build them a home, a little place of their own.
The Fletcher Memorial Home for Incurable Tyrants and Kings.
They can appear to themselves every day
On closed circuit T.V.
To make sure they're still real.
It's the only connection they feel.
…

My remote got stuck on “Channel ==>” Sunday.

Through the phosphor blur of Conventional Media Wisdom, penis embiggeners and hair dye commercials, it was clear that Wingnut Central Command called a meeting to order on Saturday night to get their stories straight.

As you know, the shelves here at the Conservative Skunk Works are pretty bare.

We initially thought that a Party-wide upchroming 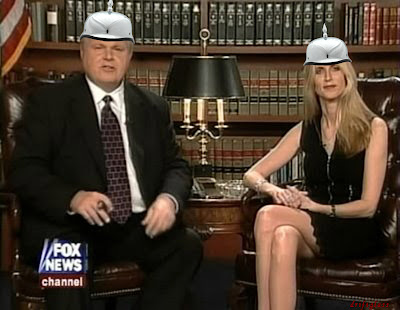 of our tinfoil hats, combined with rolling out voice modulator software that, when you play it, will generate a tone so annoying

it will make most people involuntarily poop themselves, would turn the tide.

Each gallant initiative was successful in its own way, but even as Maximum Leader Cheney heroically scuttled out of town having done all he could to advance our agenda, substantial portions of the economy remain unplundered, and dangerously large parts of the ecosystem remain unfucked.

So it turns out we’re gonna need a bigger gimmick.

Let’s open the floor for suggestions.

Chair recognizes the Monochrome Monotone from the Heritage Foundation.

Kay Bailey Hutchison: Fuck you both, I was first on this teat.

Hutchison: Tax cuts will save us all!

David Gregory: Well now, nobody has a monopoly on the truth.

Chair: Screw off, Villager. When we want your opinion we’ll swap out your chipset and power you up.

Hutchison: We’ve spent a lot on stuff in the last eight years. On the War on Terrorism, military “infrastructure”. And that didn’t work. Which proves Gummint spending doesn’t do squat!

driftglass: Yes, Our Gal Kay really did sit up straight and say words to that effect on Sunday. Maybe this is what Republicans cannot understand; that shitty body armor, cardboard Hummers, helicopters and bombs are not “infrastructure”.

That “infrastructure” is NOT supposed to blow up.

Hutchison: What we should do is cut all of that faggy social spending crap to create even more tax cuts.

Chris Wallace: (Following the obligatory Fox "Some people say"...) This is still a center-right country after all.

Wallace: But for some inexplicable reason Americans think we suck!

Steele: Which is why we need New Solutions that are true to our Core Principles.

Wallace: So for example...

a. Destroy once and for all the Evil Socialist idea that providing free, quality schooling should be a part of a larger social compact.

c. Fuck the poor one more time by throwing a coupon at them for a fraction of what a decent education actually costs, telling them “You’re on you own now”, and driving forever back to Banker Bailout Land as inner city schools collapse to dust behind them.

Steele: And I don’t need Gummint to help me do that!

Chair: Who the Hell let Frank in here!

Stephanopoulos: What about…uh. What about…what about…all the crazy stuff that’s still in the bill? Like contraception?

Frank: Contraception is out of the bill, but I know the motherfuckers who need something to mock keep harping on it, so lets just say that very few people volunteer to fight sexually transmitted diseases. They mostly need to get paid for that.

Jim DeMint: You’re useless, Snuffalupagous! Stick to the script. We’re over-regulated and need more tax cuts. This is a Gummint Run economy, and this stimulus package is the is the biggest spending thing Evah!

Frank: No, the biggest spending bill in history will turn out to the Republican’s fucked up War in Iraq.

Chair: Warning Will Robinson! Doublefuckungood! Do NOT let that sonofabitch drag Iraq into this!

Stephanopoulos: (leaping in to cut off that thread): Well, that’s a whole different show.

Frank: But it shouldn’t be. This is the problem. Republicans talk about why we can’t spend on this and that…until we get to the subject of George Bush’s disaster of a war. Then that’s off the table. Cold war weapons to fight the Soviet Union are off the table.

CEO of Google: Also there should be jobs programs. And putting everything the Gummint does on the web and tracking it would be good too.

Bob Woodward: But how will this help my banker friends!?

If we had real journalism, the real story every reporter would be asking themselves is this: who are the imbeciles and degenerates and co-conspirators in the Big Dollar Media's corner offices and boardrooms who direct their hirelings to welcome the flakes and stooges and their catastrophically failed ideology back into the national spotlight?

What are the names and addresses of the people making those decisions?

What are their motives?

Who is getting rich?

What is really being factored into and out of the decision matrices through which booking and hiring options are being filtered?

Who -- by name -- is stacking the deck with these pinheads:

In total, from 6 AM on Monday to 4 PM on Wednesday, the networks have hosted Republican lawmakers 51 times and Democratic lawmakers only 24 times. Surprisingly, Fox News came the closest to offering balance, hosting 8 Republicans and 6 Democrats. CNN had only one Democrat compared to 7 Republicans.

Who -- by name -- is deciding that, with millions of Americans in all shapes, sizes and opinions to choose from, the person we most need to hear from about how to cure our economic woes is Grover Fucking Norquist?

Yesterday on CNN, for instance, who should John King have on to discuss the stimulus on the "State of the Union" program but our old friend Grover Norquist.

Norquist pontificated at length about how a Republican alternative should look. It was just more of the same crap conservatives have been feeding us the past decade: tax cuts, deregulation, shrink government, blah blah blah.

Now, I can think of a lot of people the public could be getting sound advice about the economy from. Some of them could even fall in the "conservative" category. Grover Norquist is not one of them.

After all, this is the man whose philosophy of government is summed up in one quip:

"I'm not in favor of abolishing the government. I just want to shrink it down to the size where we can drown it in the bathtub."

Something deep inside our media has grown so broken, so dishonest, so arch and so overtly mercenary that it's lords, barons and princes can hand over the biggest megaphone in the history of the world every week to a Roving band of hacks, gigglers, dilettantes, madmen and traitors and pay absolutely no price for doing so.

And you know what? I'd bet the dirty little truths behind this monumental, public failure would make a helluva story.

Too bad we don't have any real journalism left to tell us about it.

Later, on Local Fox, pitchman Jack Conaty opined that, after Blago blew off the entire process, said "the fix was in" and then came rolling in at the 11th hour, observers were expecting "Perry Mason". But they got Evita. 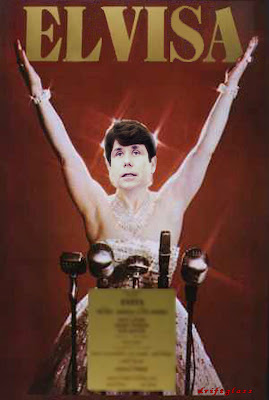 Here in Springfield, we have a restaurant called "Burritos as Big as your Head". But they don't have a Blago Burrito, obviously.

And you ask just the right question. Why THEM?

We all know without even asking that Blago will have his choice of on-air analyst positions once he lands out of court/jail. Ralph Reed and Bill Bennett were on CNN for the election 08 coverage. Along with a gigantic sucking memory hole down which their past crimes had sunk.

You once again amaze. And even get in the Final Cut!!! Man, and I thought I was the only person who ever liked that album!

The FMH has been running thru my head a lot lo these many years. Do you remember the final verse?
.
.
.
.
.
"Now the Final Solution can be applied."

Watching the crazies, also known now as tax cheating congresscritters, wail and moan about how they are helping the "common man in America" I want to apply that solution oh so badly.

Thanks for the sanity friend.

Not least because she's smarter than two rabbits, and has a wicked sense of humor. :o)