None So Blind II 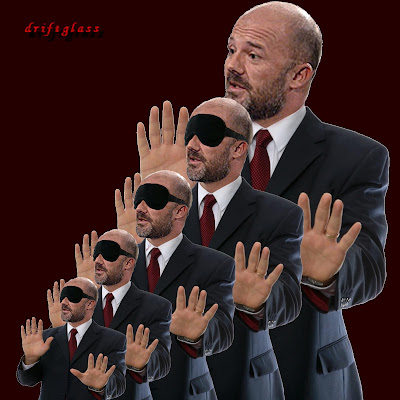 In which Andrew Sullivan is shocked to find that Republicans used their years running the country to wreck the country.

From his site (with emphasis added by me):


...
It is good to see the GOP pretending to be fiscally conservative again, but could any of them - just one or two apart from Ron Paul - concede that Bush and Cheney are the ones responsible for our current fiscal nightmare? They drove us so deep into the ditch that we have almost no fiscal lee-way to counter the kind of crisis they stumbled into at the end of their term. If we had retaied the fiscal health of the Clinton-Gingrich years into the new millennium, our range of possible actions right now would be far less dire.

Except since the beginning of time, the essence of politics has always been about deliberately depriving the opposition of as much choice and range of motion as possible. About deliberately forcing them down the path of your choosing by eliminating every other alternative.

How do you not know that?

For example, for the longest time Neoconservatives wanted to extend the American Empire into the heart of Middle East. So they used the crisis of 9/11 to gin up a pack of lies, roll 150,000 troops into Iraq, blow that country to atoms, fuel anti-American rage and terrorism where in never existed before, and then argued with a straight face that we could never leave Iraq….because of how fucked up everything was.

Or do you dirty terrorist-lovers want America to lose?!?

The whole object of the war was to strand us there; to arrange events so that no one could ever even whisper that maybe we should extricate ourselves from the Bush Clusterfuck without paying a fearful price. By mercilessly playing on the public's deepest fears and the Right's love of killing scary brown people, the Bush Administration would pitilessly cauterize every option except the never-ending occupation of Iraq and -- Bingo! -- the Neocons would have their Empire.

For decades, Conservatives have also been equally open and clear about wanting to smash the federal government and replace it with an unfettered, unregulated corporate feudal state. Because Gummint is Evil, Evil, Evil! So Conservatives rolled the Bush Administration into D.C. with all its ruthless, calculated bumpkinism like a political IED and detonated it. And Conservatives cheered as their Decider smashed and bankrupted every bit of government he could lay his hands on…applauded as he hog-slaughtered the “fiscal health” of its predecessor without a backwards glance…and now fanatically oppose any action to address out economic crisis that does not begin and end with more tax cuts.

Because Conservatives HATE the government. Or don’t you remember?

Unbridled loathing? “Booga-Booga; the Liberal Gummint is out to get you”? Hulk Smash? Starve the beast? Drown it in the tub?

On every radio and every teevee?

The text or subtext of a billion tons of Conservative direct mail campaigns?

The first paragraph of every Conservative phone-banking effort?

The thesis statement of every wingnut begging letter and fundraiser?

The fucking Guanine and Adenine in your fucking political DNA?

And since hating government (and its Evil Liberal puppet masters) is THE central organizing principle of the Conservative Movement, how can it possibly surprise you that, as Iraq follows 9/11, Conservative policies and politicians have brought us to this moment.

That however many lies it may require and however much pain it may inflict on the public, Conservatives see economic collapse in America as a good thing. A righteous cleansing and path back to power. As their golden opportunity to finally, once-and-for-all curb-stomp the Evil Socialist Gummint into oblivion.

What comes after is a little unclear, but depending on which RSS feed you subscribe to, I believe we either get a 1,000 Year Randite Reich, or The Rapture.
at February 25, 2009

The fucking Guanine and Adenine in your fucking political DNA?

I love you when you get like this, Dg.

Heh. I linked to this--it was sooo perfect.

however many lies it may require and however much pain it may inflict on the public, Conservatives see economic collapse in America as a good thing. A righteous cleansing and path back to power.

The likes of Andrew F(*&ing Sullivan will never face the fact that they enabled it all, just about all the way.

Randite Reich or Rapture -- perfect thumbnail! And it would be an excellent name for a band.

Most brilliant statement of the obvious. Why aren't I reading this in the pages of Vanity Fair next to His Snarkness James Wolcott? The sword you yield is often blunter than his, but both are sublime and need to be read by everybody.

Thank you for putting Sullivan in perspective
for people like me who read him daily. Thank
you for putting the Guber-Natorial Party in
perspective... like a freaking knife in the water
b/c you know these sharks are feeding.
I would like to say that Sullivan is more
restrained & understated & responsible
but I can't. I am not usually swayed by
over-the-top language like yours but
the pink elephant that's been hiding in plain
sight in the middle of the room, for decades,
has to be acknowledged by people like
Sullivan and Hitchens, and they will be.

Here via some shrill wag who linked back to you in a post this latening, with a quote he didn't highlight but IMO bloody should've:

Or do you dirty terrorist-lovers want America to lose?!?

Or, to put it another way, are you part of the decadent Left, in its enclaves on the coast, amounting to a fifth column?

Who was it who said that? Some gay Catholic Tory Gap model, as I recall. Until Andrew Sullivan calls that person out, by name, and acknowledges what utter bullshit that person was spewing, Andrew Sullivan forfeits the right to have intelligent, aware people treat him with any real respect. "Because," as that same shrill wag put it,

if he is not something spontaneously-generated and utterly sui generis, then he is just another Lefty-Come-Very-Lately, showing up at our door at 3:00 A.M., 20 years late and trailing toxic baggage behind him like a Halley Comet.