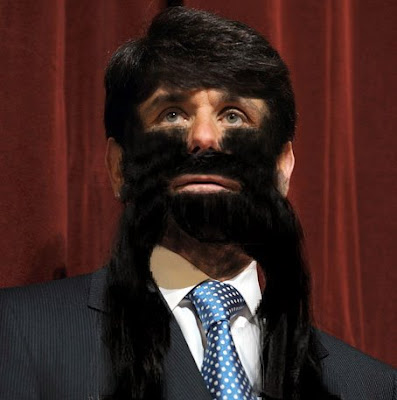 Step right up, ladies and gentlemen, and see The Amazing Dog-Faced Governor!

For the price of one, thin dime, ladies and gentlemen. One tenth of a dollah!

File under: Turns out, crime actually does pay...

During a show early Thursday, the program director at WLS-AM announced that if Blagojevich resigns, the station will offer him his own weekly radio program from noon to 2 p.m. on Sundays.

Program director Bob Shomper said the station is asking the governor to spare the state the embarrassment and expense of forcibly removing him from office.

Blagojevich has been impeached by the state House and faces an impeachment trial in the Senate starting Monday that could end with his removal.
...

On the one hand, Governor Shakedown is being offered a sweet media gig at Chicago's 50,000 watt powerhouse station -- the radio home of Sean Hannity and Rush Limbaugh -- if he would just pretty-please shut up and go away.

And let's be clear; the offer isn't exactly charity. Radio is about selling snow tires, landscaping services, penis pills and various juices. You do that by gathering a crowd around the wagon. And as AM hate radio has proved for 25 years, nothing pulls in a crowd like stunts and freak shows.

And at the moment, there's no bigger Dog-Faced Boy on the great Media Midway than Governor Shakedown.

On the other hand, like millions of other Americans, I sacrificed literally thousands of long, hard, unpaid overtime hours and sank endless sweat, passion and expertise into last place because that is what the "other duties as assigned" part of the job demanded. And when they kicked my ass to the curb, like millions of other Americans, the only thing I was offered the choice of paper or plastic for carrying away my few possessions.

I bet if we all look reeeeal hard we can find a lesson in there somewhere.
at January 23, 2009

Noon-2 on SUNDAY? Downtown is deserted. He'd be competing with the Bears for three months, the Cubs for another 5. What possible motivation could he have to accept this gig?

Ahhh, he could continue broadcasting from his cellblock when the time comes. He can maintain his core supporters, plead his case to the skeptics and bask in the celebrity spotlight at the annual inmates talent show.

Talk radio? With that hair? With that Dondi smile? Doesn't GMA or Faux News have an opening?

You are the only Blogger Extraordinnaire I know who can mix the Blago Freak Show with our last remaining option -- Paper? Or Plastic? -- and produce the alchemy of Beeee-yooo-teeful Prose.

Seriously, if Bill Bennett and Ralph Reed can bloviate on CNN as "Republican commentators" while Wolf Blitzer runs on a hamster wheel to keep the memory hole open, I think Blago can do better than a local Sunday afternoon radio gig.

Plus, his ego wouldn't fit in their studio. Let alone his Hair Product.

I went for a stroll to fetch a refill. The image of the dog-faced boy flashed through my head.

Reflexively, I laughed out loud.

causing several people in the 7-11 to look at me strangely. I thought about shouting "Damn you Driftglass!" Then thought better.

Shouters are not unusual at this particular 7-11, but it's not a club I want to join.

Why is the left running away again? We should say "what else is new?" in politics. Perhaps because, before he was recorded, we think this never happens? Should be a better way.

Surely by now you must've heard about Blago's newest defense: "They're trying to nail me in a conspiracy to fiddle-fuck with taxes! O, what a world."

I'm just wrapping up my 75th Assclowns of the Week and this one is a massive retrospective of the Top 50 Assclowns of 2008. Ten bucks goes to the first one who guesses which spot Blago Baggins got.

The hell of it is, he was on the verge of finding a cure for cancer, before Fitz, et al, wrecked the continuity of his research with their persecution of him.

The shame of it all.

convicted felon and former mayor of providence, rhode island, "buddy" cianci has had a job doing political commentary for the providence ABC affiliate since his release from prison.

notice how ABC does not mention his conviction or jail time in the bio they provide: http://www.abc6.com/about/people/news/17752914.html

He is just freaky enough to do it. But what if Big Radio turns him into an insane messiah? If he finds God, ( I'm sure he thinks he is already God) then the freakification will be complete.

Righteous indignation it the best kind...