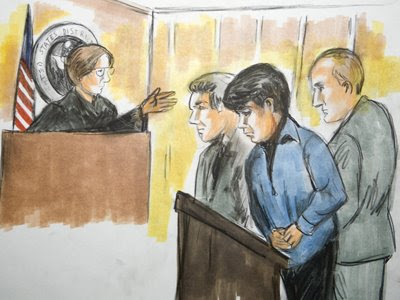 First, while the media has reported that the Blagoo is out on bail (but had to surrender his passport and hair product, so he ain't going anywhere) there is still no word whether or not he offered the court a "fucking sweet I-DOT gig or maybe a Department director job, or hey, howdja like to be a Senator?" in lieu of cash bond.

Because, yeah, he really is just that arrogantly clueless.

Dec. 09, 2008
(AP) — A federal judge in Chicago has ordered Governor Rod Blagojevich released on his own recognizance after the Democrat was hit with federal corruption charges.

He was released on a signature bond that specifies that he'll forfeit $4,500 bond if he doesn't appear in court. Blagojevich also was ordered to relinquish his passport and his firearm owner's identification car.

The governor was arrested at his home Tuesday. He's facing charges that accuse him of trying to benefit financially from his ability to appoint President-elect Barack Obama's replacement in the U.S. Senate.
...

Second, have you ever thought about what a weirdly anachronistic job

We've seen their work all our lives on teevee and in the dead tree media, and not that I want the goons from Sketch Artist, Dramatic Readers and "History Detective" Re-Creationists Local 1175 to come beat me to jelly or nothin', but it is, after all, a cartoon we're talking about.

Drawn from real life that's true, but it is nonetheless a quick graphic study that everyone just accepts screws with the visual perspectives and stacks the characters bas relief-style for the sake of getting all the principles in the frame. A holdover from another era when the public apparently wouldn't have believed the papers if they just asserted that a Governor of Illinois was in court for egregiously and criminally defiling his office, but needed some kind of cartoon to seal the media credibility deal.

And since the name of the game is giving the public something to look at that conveys a representational sense of what went on free from the need for photographic verisimilitude, 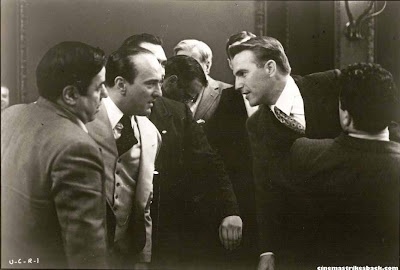 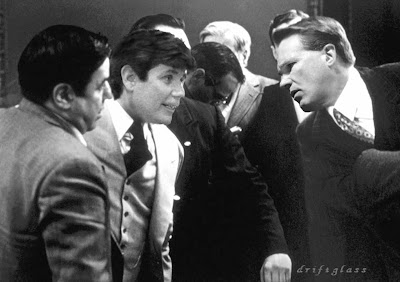 shouldn't be able to cash in on some of that sweet, sketch artist coin.

Lastly, I must say that seeing this on the first page of my Statcounter report 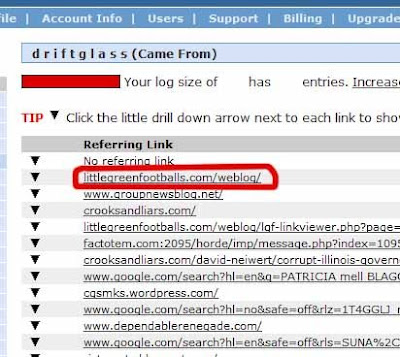 "Should the state members of the Electoral College cast their votes for Mr. Obama in the face of such overwhelming evidence, and without verification of Mr. Obama's eligibility, they would be committing treason to the Constitution," said Schulz.

I like your artistry and feel it should be the new "courtroom sketch artist" tool set. Yes, that'd be more funner! :D :D

Funny on Chris Mathews show old pat buchanan went into defending mr blagoo saying "well, he didn't act on it. It was just him and his aide sitting around TALKING about doing stuff". CM correctly pointed out the fact that buchanan was actually confused and defending nixon once again.... and he was too. feh.

Wonder what he will spew forth to attempt to take down Obama? feh.

Re LGF, it's only a matter of time before the Malkinites,PammyCakers,Billophiles, and other assorted wingnuts start screeching about you. Congratulations. You're almost in the big time . :)

Get ready for Pat Quinn! We should thank Blago! This guy will step up big time.

An honest man could never get elected Governor in Illinois. To shut Quinn up and get him out of Crook County, Quinn was inserted into the oblivion of Lt. Gov.

He flew BY HIMSELF to the Lt. Gov's conference in New Mexico. Now he's gonna be the Governor. His politics? Full-blown progressive, anti-corruption, friend of the taxpayer.

Now he'll call the shots.
Community Chest!
"An error made in your favor, do the gleeful dance of Fitzmas!"

So, I'm wondering if the State of Illinois will need to enlarge the cell reserved for governors, or is there is some kind of policy that says we can only incarcerate one governor at a time, in which case, is Ryan a shoe-in for a shoo-out?
Just wonderin'.

Damn, that art...It's almost like you're in the room with them, baby!

Ha Ha Ha Ha Ha.
They are not sophisticated enough to even know what the fuck you are talking about.

Three words in and their eyes glaze over.

Uhhh...Drifty??? You alright Bro'??? The Doctor heared you was seein' "little green muthafuckas" and havin' some terrible type fits of photoshoppin' and such??? I tol' you 'bout fuckin' wit' dem Chicago politishuns wit' out no money or hair products boy!!! Best be careful - now gon' 'bout yo bidness.

What Busted K said. LGF would be scared of your big words, dude.

Served in a nice, big, stein, with pictures of Munich on it?