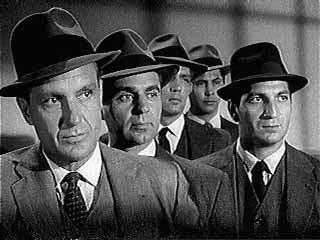 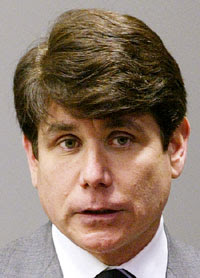 This morning, Illinois Governor Rod Blagojevich -- who always wanted to be called G-Rod, but never was -- was busted by the Feds.

In a fine example of the financially bankrupt reporting on the morally bankrupt, the recently-bought-and-now-dead-broke Tribune has more here:

Updated at 9:08 a.m.: Blagojevich and Harris were arrested simultaneously at their homes at about 6:15 a.m., according to the FBI. They were transported to FBI headquarters in Chicago, where they remained at 9 a.m.

Updated at 9 a.m.: Blagojevich is slated to appear before U.S. Magistrate Judge Nan Nolan today at a time that has not yet been scheduled, according to Randall Samborn of the U.S. attorney's office.

Updated at 8:57 a.m.: On the issue of the U.S. Senate selection, federal prosecutors alleged Blagojevich sought appointment as Secretary of Health and Human Services in the new Obama administration, or a lucrative job with a union in exchange for appointing a union-preferred candidate.

Blagojevich and Harris conspired to demand the firing of Chicago Tribune editorial board members responsible for editorials critical of Blagojevich in exchange for state help with the sale of Wrigley Field, the Chicago Cubs baseball stadium owned by Tribune Co.

Blagojevich and Harris, along with others, obtained and sought to gain financial benefits for the governor, members of his family and his campaign fund in exchange for appointments to state boards and commissions, state jobs and state contracts.

"The breadth of corruption laid out in these charges is staggering," U.S. Attorney Patrick Fitzgerald said in a statement.
"They allege that Blagojevich put a 'for sale' sign on the naming of a United States senator; involved himself personally in pay-to-play schemes with the urgency of a salesman meeting his annual sales target; and corruptly used his office in an effort to trample editorial voices of criticism."


Updated at 8:48 a.m.: Gov. Rod Blagojevich and his chief of staff John Harris were arrested today by FBI agents on federal corruption charges.

Blagojevich and Harris were accused of a wide-ranging criminal conspiracy that included Blagojevich conspiring to sell or trade the Senate seat left vacant by President-elect Barack Obama in exchange for financial benefits for the governor and his wife. The governor was also accused of obtaining campaign contributions in exchange for other official actions.

Blagojevich was taken into federal custody at his North Side home this morning.
...

For those of you unfamiliar with the incestuous witchbag that is Illinois politics, after Republican-Governor-then-criminal-and-now-Presidential-pardon-seeker George "Why is every other person in Illinois politics named 'Ryan'?" Ryan retired to the House of Many Doors, Rod Blagojevich marshaled his considerable family clout to win the office.

Some of the highlights of his rise to power:

Yet another Illinois pol goes to jail -- this time powerful Chicago Congressman Danny "Rosty" Rostenkowski (D- Mail Fraud)-- allowing the much weaker Mike Flanagan to warm the the 5th Congressional district seat for one term until he was crushed by the Blagojevich/Mell juggernaut.

So, after 30 years of Republican rule, Democrat Blagojevich slid into the office, where he immediately made clear the disdain for the actual business of state government which would mark his tenure as governor by rarely visiting the state capital in Springfield, and never even pretending to set up housekeeping in the Governor's official residence.

Understand that, in Illinois, Democrats now control the state House, state Senate, every state-wide constitutional office, the Mayoralty of Chicago, the city council of Chicago, the board controlling the second most populous county in the country (Cook), and almost the entire federal congressional delegation at a time when the DNC has been moved to Chicago, and an Illinois Senator is about to be sworn in as President.

So you'd think, hey, maybe now would not be the very best time to piss away a once-in-a-lifetime historic opportunity to consolidate Democratic gains by fucking up the state budget and generally carrying on like poo-flinging howler monkeys.

But you would be wrong.

Recently, Blagojevich broke with his long record as a do-nothing haircut who governed by whim and tantrum, sacked-up, and actually publicly supported the heroic workers fighting for their rights at Republic Windows and Doors (located at Hickory & Division Streets, in Chicago's Goose
Island Industrial Corridor.)

And good on him for doing it.

Still too little, too late, as reaction to the news of Blagojevich's arrest from every ambulatory human being in Springfield who was not on the Blagoo payroll was rumored to be swift

**(Thanks for delurking to make the catch, Jakkepoes.)

Oh, Blagoo. Couldn't you just have had $5,000/hour sex with teenage hookers like a respectable governor? Did you have to drag BHO into it? Schmuck.

You mean "Republican Governor Jim Edgar." A political hack, but an honest one.

Blago was a stooge who decided he wanted to govern, and make his own decisions. He wouldn't follow orders, and so had to go. I'm surprised at 2 things - 1) that Fitz bothered with this, and 2) that this kind of "deal making" doesn't happen ALL THE TIME - probably going on for Clinton's and Biden's seats as well.

that this kind of "deal making" doesn't happen ALL THE TIME - probably going on for Clinton's and Biden's seats as well.

Don't know about Biden, but here in NY we just bestow the seat on whichever member of a political dynasty is in need of a gig at the moment. See e.g., Clinton, Hillary and now Kennedy, Caroline.

There's a very real reason for those of the populist/progressive bent to feel a bit of sunny optimism here.

Any misgivings that I've ever had about an Obama administration have always stemmed from the reality that there is no forceful, respected progressive/populist voice operating from a position of genuine power who also occupies a presence in the public realm to both push and provide cover for the Obama administration. For a long, long time we've needed someone who can stir the fires without looking like a raving lunatic. Perhaps that person is about to arrive.

I believe that Pat Quinn, our lieutenant governor, has the potential to be this voice. To be Huey Long to Obama's FDR. To be the one pol who will both propose and push the kind of reforms that are almost unilaterally poo-pooed by the punditocracy as left-wing socialism but are, in reality obvious, necessary, common sense and undeniably designed to "Promote the General Welfare" with the strictness and most literal meaning that this grand phrase implies,or more properly, demands.

Go get 'em, Pat...just make sure you go light on the duchy.

Dude! I need a scorecard to keep track of the lineage of political corruption over there. And when does Fitzgerald get to kiss ass and take names on a Federal level within the chimp pardoning everyone in sight?

Good people, I give you the joys of British English:

Though he was unbearably crass about the whole quid pro quo situation, I would have expected that a plum like that appointment would have been would have been bartered before or after in the same way that many diplomatic appointments are made. Ambassadors are not the most qualified going to the area most in need, but the most "entitled" getting the choicest locales.
Glad he got burned but there's a whole lot of the way that government operates "normally" that needs to be scrapped.

Howdy from a regular reader. Your link to Greenwald's Salon article isn't working right now because the URL has an extraneous "%20" on the end.

I thought this was the way things worked normally - you know, if you buy/steal the office, you get to do anything you want (see Cheney/Bush/Libby/Yoo/all their appointees for further enlightenment).

My first thought was "Whom did he piss off?" Not Fitz surely. And if your Illinois (don't abbreviate it!) officials are so universally corrupt, doesn't it seem strange when they decide to enforce the laws against one - or a few (h/t to Bluesy)?

But I'm out of my element. We send the corrupt govt. officials to jail in NC (see Rep. Jim Black for further evidence).