The Trajectory of Falling Objects 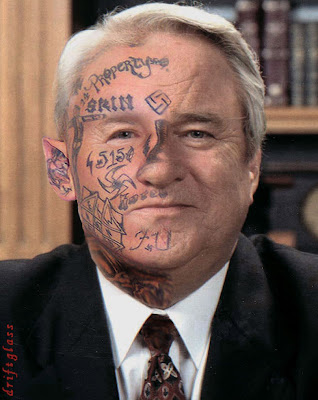 Which kind of Conservative are you?

Because all of the other self-aggrandizing, self-identified, self-congratulatory subgroups except these add up to nothing more than electoral rounding errors camped way the hell out to the right of the movement’s decimal point.

Political trace elements, now all scrambling to pretend they have no idea who these 60 million other goofballs are that have betrayed the “real” movement and “hijacked” their little six-man-ivory-tower-circle-jerk of small gummint True Believers.

Such are my thoughts when I read this by Andrew Sullivan, 2008:

And then chased it with this from Sullivan, 1999:


Do we not owe something more to the victims of hate? Perhaps we do. But it is also true that there is nothing that government can do for the hated that the hated cannot better do for themselves.

Which, taken together, translates roughly as "Big Gummint solutions for me, but not for thee."

Then I ask the bartender for another round, and he brings me this from Andrew Sullivan from today:

Donny Osmond on my marriage:


"We warn that individuals who violate covenants of chastity, who abuse spouse or offspring, or who fail to fulfill family responsibilities will one day stand accountable before God. Further, we warn that the disintegration of the family will bring upon individuals, communities, and nations the calamities foretold by ancient and modern prophets. We call upon responsible citizens and officers of government everywhere to promote those measures designed to maintain and strengthen the family as the fundamental unit of society."

I particularly cherished this sentence:


In fact, some of my best friends are gay.

I suspect he has as many gay friends as Sarah Palin.
…

And I sez to myself I sez “Hells yeah! I mean, in these modern times what sort of sap could possibly hold themselves willfully ignorant enough to fall for that ‘some of my best friends’ horseshit?"

And then the barman sez to me "Here's who", cracks open another vintage “Sullivan, 1999” and pours me a jigger:


[Mencken] reminds me of conservative friends who oppose almost every measure for homosexual equality yet genuinely delight in the company of their gay friends. It would be easier for me to think of them as haters, and on paper, perhaps, there is a good case that they are. But in real life, I know they are not. Some of them clearly harbor no real malice toward me or other homosexuals whatsoever.

Bang head on bar and swear like Clarence Darrow being cut off in traffic by Sarah Palin while she yaps on her cellphone to Joe the Plumber.

Of course, Sullivan is plenty smart enough to know that “real life” also includes that moment you speak up, stay silent or join in when the bigot mob is rising like a tidal surge. That moment when you bring your money, faith or influence to bear in support of or in opposition to an issue. And that moment when you step into the voting booth and decide whether or not to use the franchise your forebears died for to keep your “dear friend” a second class citizen.

Now it so happens that I am a big believer in personal, ethical evolution. I believe that a person really can learn from touching the hot stove; really can learn to be less of a shit and more of a human being.

But there are a couple of rather large problems with applying that theory here, the first being, like most of the other Wingnut Apostates we see these days wandering the streets of our fair nation, weeping and rending their "Haig '88" tee-shirts, their fury is entirely centered around yet another self-serving deception: that the Party they joined was a Conservative Camelot presided over by Reaganite Royalty who practiced and preached free markets, Small Gummit and individual liberty until Karl Rove and George Bush snuck in in the middle of the night, coshed them on their noble heads, and messed it all up.

Then, by jiminy, these perceptive Apostates positively leaped to their columns and microphones, and went a-galloping off through every Middlesex village and exurb shouting…!

That the Republican Party is top-full with bigots and fascists and douchebags?

The 60 million Americans who have known this – seen it plain as noses on faces and have been shouting/leaping/hair-on-fire-bellowing trying to get you to notice it – for the last quarter of a century?

The problem with absolving Sullivan isn't that he is late to the party. It's that he is Very Late. A suspiciously large number of decades late -- especially for someone who actually gets extremely well paid to be an astute observer of politics and culture -- which leads to that second credibility problem: Timing and money.

The Modern GOP, as is now painfully clear, has always been the furious white guy party. The Jebus party. The gun-fetish party. And the all-of-them-riding-the-short-bus-to-school-together Party.

Not exactly an appetizing bill of electoral fare -- certainly not the kind of people you’d ever trust to baby-sit your Constitution -– but fortunately the Party of God was also the Party of Money, and so the GOP did what any hagged out failure with a ton of cash would do: it went out and bought itself some credibility!

It bought itself a whole religion, complete with satellites and universities. It bought institutes and governments. It underwrote think tanks and teevee networks. Book publishers and spokesmodels. Coast-to-coast radio coverage and “serious thinkers”.

And it bought itself a teevee-friendly veneer of diversity.

What the Right needed was a light coating of urbane respectability to buy them enough time and access to destroy the country.

And it was people like Sullivan who happily lent it to them.

On the Left, the technical term for a gay or minority political writer is…writer.

But on the Right, the technical term is “celebrity”, which meant as long as people like Sullivan were onstage doing their dancing Conservative monkey act, the Party of God could point to them and say “See, we’re not haters” to the press.

And as long as the con game played itself out, times were good in Tokenville, high-paying gigs were plentiful.

Not to put too fine a point on it, but without the word “Conservative” tacked to their resumes, people like Andrew Sullivan, Kathleen Parker, David Brooks and a growing nest of “Obamacons” would all have had to go looking for honest work a very long time ago.

…until the day that Conservatism’s Brand Identification started to fall faster than Port A Potty stock the day after scientists figure out how to turn shit into gold.

Which leaves the Apostates with a serious cash-flow problem.

Over on the Progressive side, nobody in the world is going to pay to read Andrew Sullivan’s thoughts on being a gay liberal.

And over on the Conservative side, well lets just say the Stormfront “Blood and Soil" types appear to be gobbling up those leftovers for 10 cents on the dollar.

And so with the con folded up and gone leaving behind nothing but a trunk full of faded copies of the “Contract with America”, the fairy tale of a treacherously betrayed Conservative Camelot was born.

Or, as the Shrill One put it just yesterday when quoting Upton Sinclair:


It is difficult to get a man to understand something, when his salary depends upon his not understanding it.

Nothing like some fresh, oven-roasted snark on a cold snowy morning, YUM!

Reading this, I couldn't help but think that Clarence Thomas' situation must be quite analogous, although Thomas has better mastered keeping his doubts suppressed publicly. To know you are experiencing a crisis of conscience, and yet lack the courage to face it must be a very disabling emotion.

Thank you for not doing any photoshoppes involving Andrew Sullivan's raging manhood parts. Some artistic dilemmas are better left unsolved.

But Sir, you neutered that dawg but good.

Seein' as how Donny Osmond and his "church" have such a firm stance on all things moral vis a vis teh Gayitude, exactly how can he actually know any gays, especially since he lives behind the Zion Curtain (eg, in Utah)? I'm not buying it Donny, so go find those lost gold plates before you bring that shit up again, OK?

Between "Political trace elements…" and "…until the day that Conservatism’s Brand Identification started to fall faster than Port A Potty stock the day after scientists figure out how to turn shit into gold." you have quantum leaped yourself into the top of my Johnathan Swift hall of fame ahead of Ambrose Bierce. I didn't think it could be done.

".....Now it so happens that I am a big believer in personal, ethical evolution."

Another one for the record books, Dg. I had wondered from time to time what the Sullivan-boys would do after the election. Will you please let him write on yer blog? heh

And yes, it's going out to the thousands in just another moment.

Does anyone know where Hillary stood on gay marriage?

Did any of the press have the nerve to risk getting their "misogyinistic" selves flayed to the bone, for asking her such an "irrelevant" question during the primary contest?

I mean, I was just curious.

And some OT, Digby, in her perpetual HANDS-OFF-HILLARY! mode, is once again howling because there are some media types who won't pretend that Clinton ran an honorable, decent, issure-oriented campaign, instead of coming out of it with her hands dripping, elbow deep in Rove-sleaze, not to mention the blood of a few hundred thousand Iraqi's and those 4207 of our troops who've died there.

There is an acronym you will not see in Digby's rants defending Hillary. It is:

She regularly, and not unfairly, excoriated Lieberman for his treachery, but when Hillary was praising McCain in the primary, and trying to peel off rightwing support from him, and when Palin was sucking up to her as a sister "ceiling breaker", Clinton uttered not a syllable about the supposed huge differences between herself and Caribou Barbie. Instead, rather than risk one atom of the rightwing support she had so assiduously courted for these several years, she hid under the porch like the poodle she is, and let Palin run wild, when she could have stripped her to her toenails with one press conference.

Thanks a lot, Hillary.

And thanks to you, too, Digby, for continuing to flack for someone who shouldn't be within a parsec of Barack Obama's foreign policy.

Backing up something that you didn't bother putting too fine a point on is this Yahoo article stating that the dumb, ill-educated and snake-charming Bible thumpers were much, much more likely to support Prop 8.

Well...as someone who spends a good deal of time on the intertubes...I just have to ask: Why are you the only one pointing this shit out on a regular basis?
Andrew is nothing more than Cokie Roberts with an accent and testicles...and yet Bill Maher still invites him back to dominate whatever panel of woosies he sees fit to put up with him.
The vast amazing bankruptcy of the conservative movenment remains a bigfoot on the MSM screen for the immediate future...despite their recent extreme public repudiation. What will it take to get this story some real traction?
Global economic collapse doesnt seem to have done the trick.
Just askin......?

The only sure thing would be public lynchings.

Love you much Driftglass, but Sullivan's blog is VERY POPULAR. Saying nobody reads him or likes him anymore is just wishful thinking.

tweez,
Not saying that.
I probably should have been clearer.