When Mr. Pot dabs on the black face paint...

Slips on the black Arlos and black silk socks...

Sneaks across no-man's-land at midnight during the dark of the moon...

To shoot Mr. Kettle in the face with Black Talon ammo...

People who don't see a connection between Bush's fundamentalist psyche and his refusal or inability to see reality in front of him would do well to read this post from "Flopping Aces," a far right Christianist trying to absorb the facts of our time. He cannot:


It may be that right now all the powers that be, the media, the educational system, etc. seem to be arrayed in favor of things that we, the minority, can see are not good. Much of what we have seen has seemed ‘rigged’ against us, and we have been ‘defeated’ like the inner and outer enemies of Joan defeated her. In this time, we should remember we cannot possibly see with an infinite eye. We should leave that for the One who is competent to do so. It can’t be our goal to only ‘win’ arguments or technical victories.

And now watch as I once again use the magic of word replacement to pierce the chintz drapery of delirium that Conservatives use to keep the agonizing, eye-bleeding light of realitude from busting up the eternal midnight of their ideological crackhouse.

People who don't see a connection between Bush's fundamentalist authoritarian psyche and his refusal or inability to see reality in front of him would do well to read this post from "Flopping Aces," a far right Christianist apologist trying to absorb the facts of our time. He cannot:


Yadda yadda ignorant goose-steppers yammering about the being betrayed

Both Andrew Sullivan and the whelping box full of squirrely wingtards he mocks share a common delusion: that Conservatism is essentially the whore with the heart of gold.

That it is a fundamentally sound and noble enterprise which was brutally savaged and sold out by a skeezy minority.

For the “Flopping Aces” fucknozzles, the Dolchstoss was done by evil Jewish bankers and intellectuals 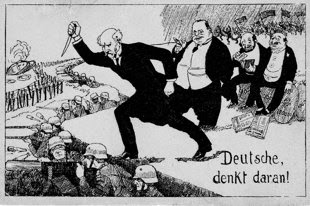 “the powers that be, the media” and the rest of the paranoid fringe’s usual suspects, and for Sullivan, the betrayal came from the “Flopping Aces”-types.

How neatly – like Russian puzzle dolls – their delusions nest one inside the other.

Of course they are both equally and laughably wrong, but of the two, Sullivan’s transgression is the greater because he damned well should have known better, and because even after it has all gone horribly up in flames right before his eyes he still doesn't even have the pen-and-ink courage to admit the truth: that Bush was not an some aberration of Conservatism, but its apotheosis.

That before Bush and Rove, there was DeLay.

Before Thurmond, hell, there was Jefferson Davis.

That going back as far as 1964, anyone with eyes open and mind ungunked-up with Right Wing hoo-ha could see this clearly:

From Rod Serling writing in an editorial in the (then very right-wing) Los Angeles Times in 1964, in response to a series of articles by wingnut-apologist Morrie Ryskind:


…
What Mr. Ryskind seems constitutionally unable to understand is that there is a vast difference between the criticism of a man or a party, and the setting up of criteria or patriotism which equates differences of opinion with disloyalty.

We have need in the country for an enlightened, watchful and articulate opposition. We have no need for semi-secret societies who are absolutist, dictatorial, and would substitute for a rule of law and reason an indiscriminate assault on the institutions of this republic that should and must be held sacrosanct.
…

“[The far right cannot] discount the fact that sitting it their parlor is the Ku Klux Klan, the American Nazi Party, every racist group in the United States and not a few of some Fascist orders that have scrambled their way up from the sewers to a position of new respectability.”

Modern Conservatism was born steeped in original, bigoted sin ever since Lyndon Johnson and the 1964 Civil Rights Act --


In conjunction with the civil rights movement, Johnson overcame southern resistance and convinced Congress to pass the Civil Rights Act of 1964, which outlawed most forms of racial segregation. Johnson signed it into law on July 2, 1964. Legend has it that, as he put down his pen, Johnson told an aide, "We have lost the South for a generation," anticipating a coming backlash from Southern whites against Johnson's Democratic Party.

-- and the rise of the Southern Strategy --


From now on, the Republicans are never going to get more than 10 to 20 percent of the Negro vote and they don't need any more than that... but Republicans would be shortsighted if they weakened enforcement of the Voting Rights Act. The more Negroes who register as Democrats in the South, the sooner the Negrophobe whites will quit the Democrats and become Republicans. That's where the votes are. Without that prodding from the blacks, the whites will backslide into their old comfortable arrangement with the local Democrats.

-- and has been sliding deeper into the septic tank ever since.

And according to Wikipedia, Andrew Sullivan was born in 1963.

Which means that Andrew Sullivan has been wrong, about everything, his entire life.

It means that he has spent his productive years being a dupe; being to the Fascist Right what George Bernard Shaw was the Stalinist Left.


Shaw became an ardent supporter of the Stalinist USSR. The preface to his play On the Rocks (1933) is primarily an effort to justify the pogroms conducted by the State Political Directorate (OGPU). In an open letter to the Manchester Guardian, he dismisses stories of a Soviet famine as slanderous and calls reports of its exploited workers falsehoods.[59] Asked why he did not stay permanently in the Soviet 'earthly paradise', Shaw jokingly explained that England was a hell and he was a small devil. He wrote a defense of Stalin's espousal of Lysenkoism in a letter to Labour Monthly.

Sullivan has cheerfully poured his time and talent into the work of advancing the fortunes of a Movement that despises him and everything he stands for, and has since the day he was born.

And that, my friends, is a very special, self-loathing kind of stupid indeed.
at November 28, 2008

You amaze me Drifty.

That was a ritualistic vivisection of a man who has no defense and is so deserving of being called out.
Damn, you are good!

in accordance with that sentiment, a brief statement relating to the text: Rod Serling wrote often of these same themes (right wing lunacy). It's interesting how little things have changed since the 50's.

Let me contribute this you anonymous piece of shit,
I don't consider it bad manners to articulate my appreciation for good writing and the depth of thought that goes into it.
I do consider it rude when some asshole who doesn't have the balls to even put up a pseudonym for identification decides to unload on the population at large.
You can take a big suck right outta my ass.

What happens when you use word replacement again and substitute "capitalism" for "conservatism"?

By corollary us DFH's have been right about everything our entire lives. Thanks for that! :-)

Thanks Busted Knuckles, I too appreciate good writing, and that is one of the reasons why I read Drifty. Your response above falls into the same worthy catagory.

Whatever Bustednuckles and Stringonastick said.

Tool Sullivan was beside himself in 2000 when Der Leader Dubya was annointed King of the hill. I emailed Tool about the stupidity of him backing a party that didn't like his type..that the GOPers wouldn't allocate any rights to him or his loved one...that Dubya was stupid..blah,blah. Tool was in love..reality be damned.

Your guess is as good as mine as to the why, but all I know is that it has been good sport watching Sullivan bounce pointlessly between his many and varied mutually irreconcilable positions, like a eunuch doing a fertility dance.
nttawwt

"like a eunuch doing a fertility dance..."
Sweet turn of phrase, I hope you don't mind that I'm going to steal that!