Dubya Left The Cake Out In The Rain 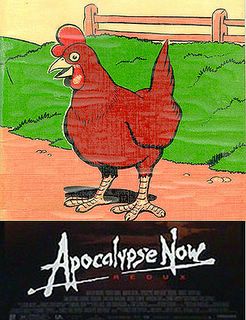 I brought this out of the April, 2005 cold storage vault because I'm lazy the most pernicious lie that "Conservatism Cannot Fail; Conservatism Can Only Be Failed" Righties (Yes, I'm looking at you, Andrew Sullivan)

"...
And what's left of the right has become so shrill, so theologically rigid, so culturally afraid that they have become a shell of what self-confident, future-oriented conservatives should be. The right will recover from Bush. But Rove has succeeded beyond measure in creating a durable majority: for the Democrats."

-- are now trying to peddle to themselves the fantasy that it was all Dubya's fault.

That he and Don Karleone came in through the bathroom windows, stole their righteous cause and left the Conservative cake out in the rain.

And they'll never have that recipe again!
Oh, nooooes!
Well this is one of those Big Lies which must be pitilessly rebutted, discredited and mocked whenever it peeks its ridiculous head into the public discourse of grownups. So a few years ago I figured if maybe we explained the truth about Conservatism to them reeeeeeal slow, as if they were children:

One day we will have to explain to the children what happened when Thurston Howell III lost his right mind and decided that for the sake of some tax cuts to make him incrementally more comfortable, his very bestest buddies in the whole, wide world were the Ultra Right Wing Gorgons down in Jesusland.

May I suggest the following?

"Who will help me plant the hate?" she asked.

So she buried the hate in the bloody ground of the Old Confederacy. After a while it grew up paranoid and ignorant and violent.

"The hate is ripe now," said Little Red State Fundy. "Who will do the mass mailings and preach bigotry from the Pulpit?"

So she licked envelopes until her bill was cracked and dry and stood up into the House of God and crowed to her flocks in their millions that God Loved Them for hating and killing creatures who were not like them.

Then she asked, "Who will help me focus this hatred politically?"

Then she carried the hate to steps of the Congress and the White House.

"Who will make a mandate from this hate?" she asked.

So she got on the phone with her very good friend Karl Rove and with his help organized carpools to the polls, and get-out-the-vote drives, anti-gay marriage amendments and smear campaigns. For Jesus.

And now everybody knew it.

Then she said, "Now who shall help me Rule the Earth."

"We will!" said Moderate Republicans, Undecideds, and Libertarians.

"I am quite sure you would," said Little Red State Fundy, "but see, now you are all my bitches."

Then she called Randall Terry and Tom DeLay and Ann Coulter and Jerry Falwell and Rush Limbaugh and James Dobson, and they and the rest of the Shining Path Republicans used what was left of the Constitution as ass-floss.
And judges were terrorized into silence.
And those deemed ungodly were beaten in the streets.
And they invaded whoever the fuck they felt like, for whatever fucking reason they chose.
And the very idea of a Free and Fair press died.

And to people who had been very clear all along that they genuinely believed in a Theocratic Nanny State and thought that precipitating Armageddon and triggering the Second Coming should be the highest calling of any worldly government, were handed over the police, courts, government, treasury and nuclear weapons stockpiles of the United States of America.

And in the end -- just as they had been warned for the past twenty years -- there was nothing whatsoever left at all for Moderate Republicans, Undecideds, and Libertarians.

you left out the blue dog democrats. and harry reid. and nancy pelosi.

Pic of the cake:
http://blogs.cqpolitics.com/davidcorn/McCain-Bush%20photo.jpg

It was raining pretty hard in NOLA just then.

WTF would that look like?
A rightard who is *confident* that the future holds nothing but Mogadishu-XXL militia race-and-religion wars and the rule of the iron fist?

You know, I was thinking this very thing today. The GOP HAS to figure out which direction they will go in after 11/4 and with whom.

Do they try desperately to reconnect with the center-right (or consevative Dems) and patch their party with something at least looks vaguely intelligent. OR do they go with the full-blown fundy nutjob, venal, knuckle draggers who can only take them to the 30% high water mark? Hmmm,...

Ducky says go with the thumpers. That should keep the R's down for two decades.