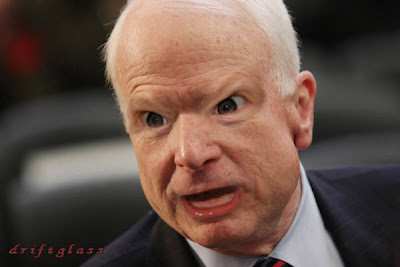 As regards the debates, the teevee machines are full of analysis and men-in-ties, and the internets are full of 1,000-comment-threads on monster blogs.

So into that large tome I will slip one one footnote.

Since John McSame has been bought out by the Bush/Rove machine he has had one note: humorless fury. Every answer tonight was either preceded with a sneer of raged-up petulance, or punctuated with “Senator Obama doesn’t understand…” condescension.

In my fantasy life, Senator Obama would have picked up that gauntlet, upped his voice a decibel and rubbed that miserable old man's melting face right in his failures, complicity, wildly lurching/grab-at-anything-shiny economic "policy" and his befuddled, polyandrous relationship with dates, names, nations and facts.

For all of the economic to-and-fro, this was primarily a discussion of foreign policy: John McSame’s stronghold. And what the Senator from Illinois clearly wanted – and believes in, across-the-board and down to his DNA -- was a gentlemanly, adult exchange about process and judgment, so instead of shooting the big, fat targets McSame kept throwing up out of the sky, he kept trying to drag the whole thing out of the weeds and into the classroom.

Which Senator Obama failed to do because he failed to realize was that Republicans live in the weeds.

What Senator Obama succeeded in doing was accomplishing was his primary mission: show anyone left with an open mind that he is more than up to being the President of the United States.

And as much as I longed for him to rejoined with a brass-knuckled “What Senator McCain does not seem to realize is that, like Czechoslovakia, the Soviet Union no longer exists”, I learned month ago that the Senator for Illinois does not exist to slake my desire for rhetorical bloodletting.
at September 26, 2008

I see your desire to have the McCain throttled and raise you a Senator from Illinois smarter than both of us. Can't wait until he hits his stride in the next debate. And really can't wait to see Biden take apart the beauty queen.

I am one of those who thought the following:

2) I don't think it matters, cuz the electoral college will decide who the next prez is, not the populous vote.

The 'thugs live in the weeds, but will not vote for the O'Man. The only people left to really speak to are the "undecideds," which at this point means folks who are either lying to pollsters or don't have the capacity to differentiate Obama from McCain given ALL the evidence that has been laid before them on silver plates.

I learned month ago that the Senator for Illinois does not exist to slake my desire for rhetorical bloodletting.

McSaim isn't Obama's opponent. McSaim's already lost. Obama was delivering steady, punishing body shots all night to the little demon who's going to be sitting in most every polling booth on election day whispering, "You really gonna vote for the black guy?"

That nasty sucker will switch 2 to 6 percent of the vote from Obama to McSaim, no question there. This is the opponent who can change the election. Obama did a great job last night hammering him, and hammering that number closer to two.

Gawddamn, it's frustrating to watch a boxer go after the body, round after round. You're dying for him to just get one clean shot, to get the spectacular knockout. But body shots are where most fights are won. And if Obama had gotten angry last night, even once, that f*cker would have scored a TKO.

Oh, yeah. Since it hasn't been mentioned, I thought that's why you and this abattoir existed. And you even keep things pleasant by hosing down the blood and stray chunks before replacing them with fresh several times a week.

I would've liked one or two "thats a lie"'s from Obama. He could have remained painfully calm but pointed out the derangement of the situation.
I loved it when Edwards used to say "aren't you tired of being lied to?" in that exasperated tone
(of course he also was referring to himself, but in less important areas than the very survival of this country,) and apparently we werent tired enough.... and I wish we could see some more of the Obama who says "enough!" like a stern parent, and then goes on to explain it all reasonably. He gained more from his reactions than his words...when he laughed at McCain's silly claims it was like he was saying "oh, you old man...silly, silly old man!"
Even Tweety was on board with that.

The problem is that it was late (in more ways than one)and everyone is tired. Obama's explanations blend together into some sort of college course that I didnt pay attention to anyway. Add to that my live chat with a whole bunch of fun folks, and my 98 year old grandfather, who had had a cuppa coffee with me to make it through, saying "what the fuck!?are the banks gonna be open on Monday? This is bullshit!" over and over, and it all sort of fell to the circus theme that plays in my head all the time these days.
It wasn't till after 11PM EST and then 12, when MSNBC finally allowed Keith Olbermann and then Rachel Maddow to fully comment on things, that I started to feel a little more sane, and yet, to also really worry.
I find it pretty depressing to live in a country that is content to slide happily downwards into an anti-intellectual sewer. (the sewer where Palin throws the books, according to Taibbi in Rolling Stone... a great article which I suggest but don't have the html to link to here.)
If this is what people want, then ....I dunno...WTF!?...Ive lost where I thought I lived, grew up, was growing old...they take not only the money, but they dismantle what was good about the society and the structure of things.
and they convince people that's what they need and want. We end up with no framework to even work with....and maybe that's a job for the young folks...? Ive never imagined anything like this but I should have, because history repeats itself and we are, afterall, at the core, only animals.

If a fight cage on the Jerry Springer stage is were its at, then we've lost the battle against our base instincts anyway. And even as Obama shows much studied restraint in that the whole thing is designed to make us feel sorry for the POW, it may be for nothing in the long run. He is not taking the bait, but somehow there has to be a way for him to respond in a way that people hear him.

Apparently there have been speechwriters killing themselves trying to come up with phrasing that will not make the old man sneer. Someone in the chat posted the clip and I shoulda saved the link because its really funny and sad. And it didn't work.

Obama needs sound bytes that are kindly yet tough.

hah...I must need to make a post on my own blog if Im commenting this long.
And it must be
time for my medication;-) no doubt Somethings gotta give.
I'm gonna get a tattoo and see if that makes me feel better.

"In my fantasy life, Senator Obama would have picked up that gauntlet, upped his voice a decibel and rubbed that miserable old man's melting face right in his failures......etc".

I was thinking, and saying (on one of those thousand heavy comment threads or six), exactly the same thing.

Then, suddenly, I thought of the 'Branch Rickey Effect'.


______
(not to mention the wise, sage, and utimately truly decent, comments of Red Barber)

You don't have to quit right now -- here, have a martini."

I wish someone had said those words to me a couple of times.

McSaim isn't Obama's opponent. McSaim's already lost. Obama was delivering steady, punishing body shots all night to the little demon who's going to be sitting in most every polling booth on election day whispering, "You really gonna vote for the black guy?"

Stonypillow, you're a smart motherfucker.

How 'bout a couple of hunnred?

I love fighting. MMA in particular since it entails almost all fighting tactics and styles. While many of us would like to see Obama shoot for a double leg, mount McCain and beat him to bloody pulp and then armbar the old coot until his arm broke of he tapped out, I realize that Obama's campaign is more like Aikido. At this style of fighting Obama is a master. Slip a punch, slide, pivot, grasp a limb and flip the punk out of your way and then keep on with your business until the next idiot comes at you. I just hope the judges are not in the bag on the first Tuesday in November when this battle is decided.

the first rule of fight club is you never talk about fight club....

I think the angry baby is making way too many appearances these days. Can one die from absurdity OD?

I would've been happy if Obama had just opened by saying, "It's not too far past your bedtime, is it, old man?"