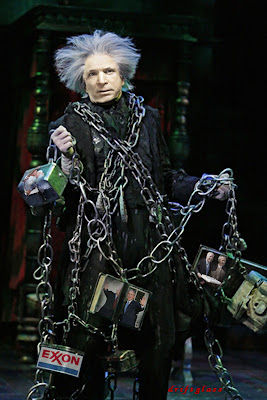 "Chains You Can Believe In."

Looks like a cross between Steve Martin and the ghost of Republican felonies past.

This picture (brilliant, btw) makes me very sad. You're saying that when McCain sees his last melanoma or whatever, he and Gramm will wander the Earth weighed down with the chains they attached in life and be forced to see hungry amputees in Iraq and Americans whining about losing their homes, and -- well, the tale has been told:

"[Scrooge] had been quite familiar with one old ghost, in a white waistcoat, with a monstrous iron safe attached to its ankle, who cried piteously at being unable to assist a wretched woman with an infant, whom it saw below, upon a doorstep- The misery with them all was, clearly, that they sought to interfere, for good, in human matters, and had lost the power for ever."

Scares the bejabbers out of me every time, that passage.

Immediatly these songs popped into my head....
http://www.youtube.com/watch?v=FFx16jM-tP0
The Cookies

I had pictured chains of gold-plated beer cans...