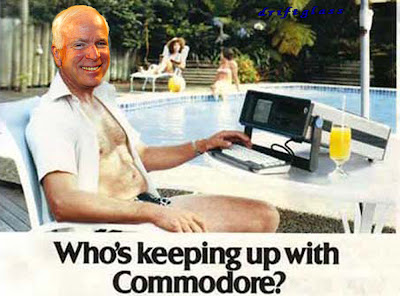 Goes for a little digital penetration.

From the Alley Insider and not the AP:

Want to know what Barack Obama thinks about net neutrality? John McCain's views on white space spectrum? Good luck learning about that during any of this fall's official debates. But we're reasonably sure these and other issues will come up via a semi-formal debate the two campaigns are starting up today -- via Twitter.

The debate is supposed to focus exclusively on tech, so if you're looking for arguments about Iraq or campaign financing, you're going to be disappointed. But since it's completely in the hands of Ana Marie, best known as the original Wonkette, we're betting it's going to be quite lively.
… 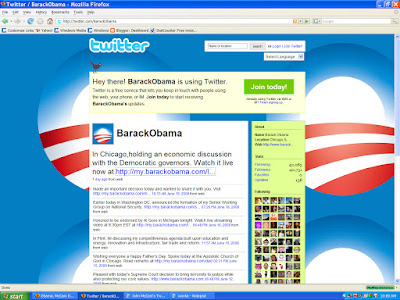 all seem to suggest a genuine grasp of technology and its implications.

McStain could be in trouble, every time someone comes up with a fucking ten year old who could explain how to turn on a computer in terms he could understand, they get renditioned to Cheneys BBQ pit.

For god's sake, or bhudda's sake or any OTHER religious icon, McCain is NOT the issue.

Those who support him, are.

And white people hate Obama, in that little 23%.

And we the people, need to pummel them, strike them down on every site, in every place, in real time, in our lives.

We need to shame them, blame them, and hold them accountable for the pure FUCKERY they have foisted upon the human race, in their sick ass attempt to control it all. 30 years or more of their fuckery.

We the people ain't GOT much money left, so our final bucks SHOULD be played to those who really WANT our business based on our political ideals.

Life is simple, dont' fuck it up.

We don't all have horns and a tail just like you ain't all rapists.

A picture does indeed say a thousand words.

He's the ONLY Icon allowed!

Hey Anon, who are you?

I said the 23% WHITEY folks, who have NOTHING to offer this planet as they have plainly proved for 30 years and longer before that.

You know, the one's who turned out for the hangings in the town squares and took photos for penny postcards to send to their friends in other counties.

So don't lecture ME about tolerance, or white folks. There's a PURE HATE population out there, and they serve our planet NO JUST CAUSE.

I don't think it's out of hand to label them as such, and make sure they are outed, exposed, and run off to some Devils Island where they SHOULD be.

And trying to make me out in the analogy like someone persecuting the Jews pretty much spells out YOUR place in the rainbow of life . . . yer in the non-color part of that spectrum. And yer tail is spiked and your breath is foul and your heart is dark with evil.

Is anyone counting how many times mcbush throws himself under the bus?

McCain is a CP/M man, through and through.

I think this is a valid criticism of McCain.

He's not in touch with the world as it is today.

This is just one clue.

I don't think McSame was a commodore. Nor do I believe he could actually operate a Commodore 64. Or an Apple II. He strikes me as somebody who has trouble getting the air conditioning in his Cadillac to work right.

Well played, drifty! Although as others have noted, McCain never learned how to operate a Commodore, either.

Hey, don't be knocking 80's technology. DOS were the days!