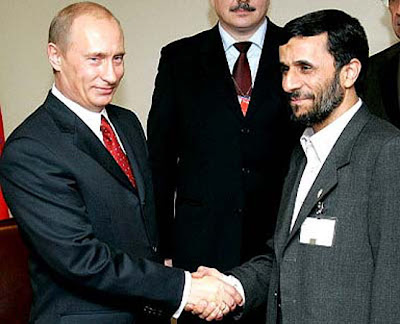 Putin warns against attacks on Iran

Russian leader Vladimir Putin met his Iranian counterpart Tuesday and implicitly warned the U.S. not to use a former Soviet republic to stage an attack on Iran. He also said countries bordering the Caspian Sea must jointly back any oil pipeline projects in the region.

At a summit of the five nations that border the inland Caspian Sea, Putin said none of the nations' territory should be used by any outside countries for use of military force against any nation in the region. It was a clear reference to long-standing rumors that the U.S. was planning to use Azerbaijan, a former Soviet republic, as a staging ground for any possible military action against Iran.

"We are saying that no Caspian nation should offer its territory to third powers for use of force or military aggression against any Caspian state," Putin said.

"The Caspian Sea is an inland sea and it only belongs to the Caspian states, therefore only they are entitled to have their ships and military forces here," he said.

Putin refused to set a date for the start-up of Iran's first nuclear power plant, to be built by Russia.

"I only gave promises to my mom when I was a small boy," Putin told Iranian reporters, when asked whether he could promise that the plant that Russia is building would be launched before his term ends next May.

At the same time, he said, "We are not going to renounce our obligations."
...

Hmm. Where have I seen this before?

Counties which can trade geopolitical importance for power and prestige, and through which their dominant partner nations can carry out a cold, proxy war at a safe distance? 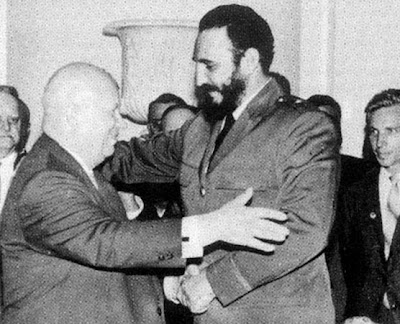 Top it off with that blithering idiot Rice over there with her finger wagging about too much executive power.
If Irony came by the pound, she would be fined for overweight on the highways.

Reminds me of the great American literary classic how to Makes Enemies and Repulse People .... err wait a minute.

Was expected to see as the second photo that famous shot of Rummy and Sadaam...

Meet the New Boss, Same as the Old Boss.

We Won't Get Fooled Again.

Drifty, I beg to differ slightly.

This is NOT the old Cold War.

This one is MUCH warmer.

I've kept saying for a year or more, that sooner or later China AND Russia were gonna make a stand.

They've BOTH done that now, in the past month.

These stakes are MUCH higher than the Cold War ever was.

And nerves are more frayed around the globe than they were during Cuba's Missile fracuz.

Too many fingers on too many triggers . . . one slip and it all ignites . . .Kurds, Turks, Isreali's, USA, Iran, and of course, China and Russia.

Nope, this is HAIRY shit hoss, it's NOT a precursor to a Cold War . . . this one's hot and ready to 'splode and ANYONE can set it off. More like WW1.

What's worst, I 'spose for all us US Cowboys, is that our leadership GOT us to this, and now will have to back down . . . or lead us to doomsday.

I prefer the back down thingy, really. I do.

God help the planet but the Chinese and the Russians may save us all from newkuler extinction.

Clearly this will all go in our favor as Bush has already looked into Putin's soul...

When I read of Condi's finger wagging comments, all I could think was "hello pot, meet kettle".

When I read of Condi's finger wagging comments, all I could think was "hello pot, meet kettle".

Drifty, you have no doubt seen this, eh?
http://www.groupnewsblog.net/2007/10/do-not-mess-with-original-gangsta.html

and condi --- way to make a bad situation worse

Bring me another bucket of steam

Reminds me of when Russia was in Afghanistan and we supported the warlords to help defeat them. Payback is certainly a bitch.