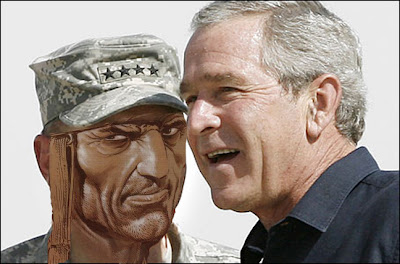 (With apologies to Robert Kanigher)

"Back in December of 2007, when George Bush originally announced the impending release of the so-called “Sergeant Iraq Report”, he assured Americans that it would “vindicate every fucking thing I ever said including calling ‘The Grapes of Wrath’ commie bullshit in college!”

"But ever since he was brought on as a Presidential military advisor “Sargent Iraq” has been a figure of controversy.

"Dick Cheney pointed to his record of long and loyal service in cartoon wars dating back to WWII, and his time with “Easy Company”, as iron-clad proof that his word was unimpeachable.

"Dirty Fucking Hippies pointed out that his rosy assessment of the Great Iraq Turnaround To Come was the result of the Bush Administration putting words in his mouth.

“Literally. Why don’t you understand this? He’s a fucking cartoon. He isn’t real. Someone draws him, inks him, and them Dick Cheney writes in what he wants him to say.”

Tempers continued to flare all winter long as America-Hating terrorist lovers kept insisting that the opinion of a cartoon, well, you must be fucking kidding me, while Bush Regime Dead Enders kept perfectly straight faces and their Faux Outrage factories went on third shift.

“Cartoon or not,” Bill O’Reilly screamed at a caller during one such exchange in late March . “If you can’t respect the uniform, you got no business calling yourself a Real American.” 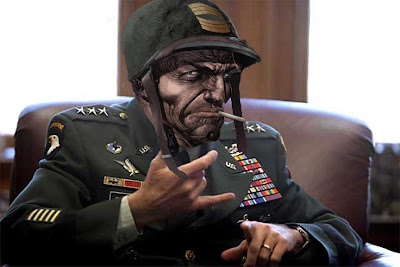 According to congressional archives, it was the first testimony submitted in flipbook form, and the first testimony ever to receive nominations for an Outstanding Animated Program Emmy (Programming Less Than One Hour), and an Outstanding Voice-Over Performance for Karen Hughes for playing the weepy “Delilah Iraq” who stoically sat behind her husband until animated Liberal Congressman Hitler O’Stalin (D-Faggyville) threw a burning flag onto the table and then peed on it.

“Delilah" then broke down and had to be helped from the cartoon hearing room.

That, of course, let to this advertisement 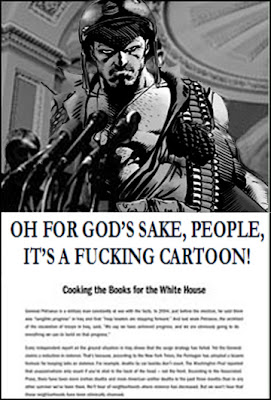 …seven critical budget appropriations bills have been held up in committee by Republicans.

…Republican Senators have put “holds” on every piece of legislation that does not renew their Dear Leader’s blank check in Iraq.

…Republicans have filibustered every effort to raise any questions about the direction of the war in Iraq.

…having been subpoenaed to testify before various House committees, the animators of the “Sergeant Iraq” footage were first instructed by the White House to ignore the subpoenas on the grounds of national security, and have subsequently been granted full Presidential pardons, and awarded 17 Presidential Medals of Freedom.

…and the Senate and House have passed 13,253 resolutions condemning MoveOn.Org’s “Sergeant Iraq” ad in language not heard since Lucifer was cast out of Heaven.

Well it's the Corporate Democrats versus the Corporate Republicans, any way you slice it. There is a remarkable bipartisanship in preserving Corporate control of our lives. Puppet theater.

I love you, driftglass. You always say what I think so much better than I think it.

Progressives need to take over the Democratic Party, as the Radical Right took over the GOP. Meanwhile, I prefer even the Vichy Democrats to the Elephascists, if only for much the same reason I would prefer diabetes to cancer, if those were my only two choices. :(

Reminds me of the Tom Tomorrow cartoons where the GOP nominates a puppy - or the more recent ones with GOP candidates running for office in Reagan masks.