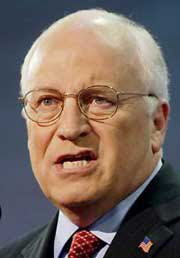 and his name that sat on him was Death,

and Hell followed with him."


This from the AP

A suicide bomber attacked the entrance to the main U.S. military base in Afghanistan Tuesday during a visit by Vice President Dick Cheney, killing at least 14 people and wounding a dozen more. The Taliban claimed responsibility and said Cheney was the target.

Cheney's spokeswoman said he was fine, and the vice president later met with President Hamid Karzai in the capital, Kabul, before leaving the country.

It was unclear why there was such a large discrepancy in the reports.
Associated Press reporters at the scene said they had seen the bodies of at least 12 people carried in black body bags and wooden coffins from near the base into a market area where hundreds of Afghans had gathered to mourn.

However, a purported Taliban spokesman, Qari Yousef Ahmadi, said Cheney was the target of the attack.

"We knew that Dick Cheney would be staying inside the base," Ahmadi told AP telephone from an undisclosed location. "The attacker was trying to reach Cheney."
Ahmadi said the attack was carried out by an Afghan called Mullah Abdul Rahim from Logar province.

The explosion happened near the first of at least three gated checkpoints vehicles must pass through before gaining access to Bagram.

…
There were 139 suicide bombings last year, a five-fold increase over 2005, and Maj. Gen. David Rodriguez has said he expects the number of suicide bombs to rise even further in 2007.

NATO-led troops patrolling the city also fatally shot a civilian who drove too close to their convoy, police said, the third such fatal shooting this month. Squadron Leader David Marsh, a military spokesman, said soldiers had given signals for the car to stop but that it kept approaching.

I am, in all seriousness, glad Cheney is unhurt. All kidding aside, unlike many on the Right, I would never militate for violence against the leaders of any sovereign governments, foreign or domestic. It is not only morally wrong, it also sets a terribly dangerous precedent.

All I want for Dick Cheney is a public perp-walk, followed by an early court date in the Hague sporting the latest in orange jump suit fashions.

And all I want for Dubya is a nice retirement party with sheet cake and champagne and 99 luft balloons and 17 articles of impeachment. Followed by a long, loooong life down in Crawford where he gets drunker and shithouse-rat crazier every year until his public addresses become indistinguishable in style and content from Charlie Manson’s periodic parole hearings.

All I want is these reeking albatrosses hanging around the necks of the GOP for the next twenty years.

But I am also very confused by the story itself, since we know that the Taliban has been utterly defeated in Afghanistan.

Well, because our government said so:

For your RDA of irony, we'll shall cite this from the People’s Daily January, 2002:

The United States on Tuesday formally announced that the Taliban has been completely defeated and can no longer control any territory in Afghanistan.

The statement is a technical amendment to a presidential order which imposed sanctions against the regime.
…

Therefore there can be only one explanation.

In this excerpt from his future War Crimes testimony, Dick Cheney states that not only did he prove beyond a shadow of a doubt and using geometric logic that there were nukes in Iraq, that we are doing fabulously well there, that there is no insurgency, that Don Rumsfeld was the Greatest Secretary of Defense Evah!, that anyone who says otherwise is a traitor and that a duplicate key to the ward room icebox did exist

but also -- since there are no Taliban in Afghanistan -- that this attack could not possibly have happened in there.

Therefore Dick Cheney must have been in Iraq when this happened.

And the perpetrators must have been…secret Iranian spies!

Fucking secret Iranian spies! Always stealing our strawberries and making Dick Cheney drive the boat in a circle!
at February 27, 2007

Oh my gosh! That last line:

Always stealing our strawberries and making Dick Cheney drive the boat in a circle!

From the Newsweek report on Cheney's trip:

"Early Monday morning, the motorcade ferried Cheney and his entourage back to the airport, where Air Force Two was parked on the Omani Royal airstrip. But instead of boarding his familiar blue and white Boeing C-10, the VP got on a massive military cargo plane usually used to transport presidential vehicles. Passengers giggled at the plane's christened name: 'The Spirit of Strom Thurmond.'"

Fools. You can't kill DEATH. Besides, Dick CHeney is half cyborg anyway. If he was damaged he could just be rebuilt by his corporate masters at Exxon and Haliburton.

"Taliban spokesman, Qari Yousef Ahmadi, said Cheney was the target of the attack.

"We knew that Dick Cheney would be staying inside the base," Ahmadi told AP telephone from an undisclosed location."

Skippy says: we do not wish harm on the vice president

I only WISH the VP was less HARMFUL to others! *weep*

And saving him for nice perp-walk will do just FINE. ;-)

cagary,
Tough choosing between this and Sierra Madre.
So don't make me choose.

us blues,
Pay per view would make out like bandits.

BitterHarvest,
It's that liquid metal Cheney 1000 that has me really worried.

WE need all these people alive. No martyrs, for their cause.

Please; we want their faces on the news, as we head into the endgame.

I had a small premonition of this yeasterday. I was listening to a news report about Darth's remarks to Pakistan when I thought "what would my reaction be if a suicide bomber got through and took him out?"

I settled on certain misplaced sentiments of Malcolm X about another assasination but I probably wouldn't be happy about it.