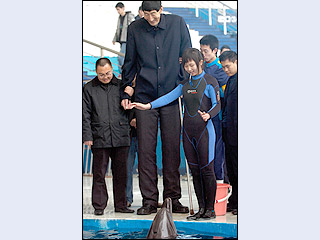 to box with God.

Yanking plastic out of the tummies of dolphins, however….

BEIJING (Dec. 14) - The long arms of the world's tallest man reached in and saved two dolphins by pulling out plastic from their stomachs, state media and an aquarium official said Thursday.

The dolphins got sick after nibbling on plastic from the edge of their pool at an aquarium in Liaoning province. Attempts to use surgical instruments to remove the plastic failed because the dolphins' stomachs contracted in response to the instruments, the China Daily newspaper reported.

Veterinarians then decided to ask for help from Bao Xishun, a 7-foot-9 herdsman from Inner Mongolia with 41.7-inch arms, state media said.

Bao, 54, was confirmed last year by the Guinness Book of World Records as the world's tallest living man.

Chen Lujun, the manager of the Royal Jidi Ocean World aquarium, told The Associated Press that the shape of the dolphins' stomachs made it difficult to push an instrument very far in without hurting the animals. People with shorter arms could not reach the plastic, he said.

"When we failed to get the objects out we sought the help of Bao Xishun from Inner Mongolia and he did it successfully yesterday," Chen said. "The two dolphins are in very good condition now."

From a pure, cask-strength, feel-good-weird angle, this is the easily the best story of the year.

And if I were am Intelligent Design freak, I’d be all over this shit.

“You mean you believe the tallest man in the world’s arm just happens to be exactly the right length to pull the seat cushion outta Flipper’s gullet? Please! Just hadda be Jebus. Case closed. Christmas War over.”

Which I predict will be the opening quote of chapter seven – “A man's reach should exceed his grasp…“ – of 2008s runaway Xian best seller: “The Porpoise Driven Life.”
at December 14, 2006

Mister Roboto said...
This comment has been removed by a blog administrator.
11:02 PM

How could I not?

It's good work if you can get it - beats pullin' used condoms outta Disco Anndy's butt.

Couldn't resist that last line,could ya? Good one...

Mark Smeraldi,
I have never professed to being anything but low and perverse :-)

On behalf of my fellow dolphins, I must take exception to the "porpoise" punch-line. Porpoises are not half as smart as we dolphins, and trust me, they will not be inheriting the planet after you humans make one or two last attempts at blowing it all to hell. It's bad enough you let that crappy football team from Miami use our semblance on their uniforms, but to be compared once again to such lowly creatures, and knowing you did it intentionally, really defeats the porpoise of cross-species respect.

Why the sudden interest in China to save marine mammals? We should be suspicious.

In this instance, talk about playing your ace in the hole!

I come here for weapons-grade snark and malicious prose that leaves it's targets writhing like worms thrice-gouged on a fishhook of literary evisceration, and I get lousy puns?


Made me laugh though. I'm easy.