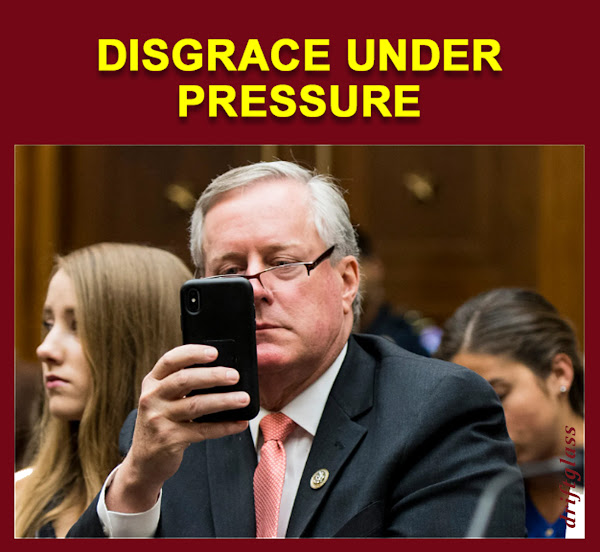 [Cassidy Hutchinson] said the White House counsel revealed his concerns that Trump’s plans were illegal. She told how she tried to get Meadows to “snap out of it” and stop scrolling on his phone as rioters prepared to storm the Capitol. She revealed how Trump initially rebuffed efforts to speak out against the attack.
...
Meadows looked up from his phone and said Trump “doesn’t want to do anything, Pat.” Cipollone told Meadows that if they didn’t act, “people are going to die, and blood is going to be on your f-ing hands. This is getting out of control. I’m going down there.”
...

You got all your insurrectionists,
I got a TV set.
You got your cars,
And this boy's never had anything.

Where is that Meadows swagger?

He so "believed" in being Trump's crimer-in-Chief.

Get LT Col Vilnian fired and out of the military for testifying with truth and then vindictively firing his brother who had nothing to do with any of it.

Was Meadows shining moment displaying his love for the military, (our troops). The MAFATS who support the Troops salivated with disdain of our military to stay in line with the Jim Hones of their time.
Like Trump who holds rallies where he can emersed his crowds in hate and anger, does not have to stay and mingle. Nor invite them to his properties. Meadows, has not been seen out with the Klan burning crosses or with the proud boys doing thuggery. Not even at a BBQ for the 4th with the Fascist Christian republicans.
All that time together in the white house bonding over crimes to do. No comradery left to even have a reunion.

But Jim Jordan has himself something that will occupy him for hours on end and lessen his loneliness that Meadows doesn't have.
An Donald Trump awarded Medal of Freedom. Because failing upward and being honored for it meant so much for the Rushbo to put on his gravestone as his greatest accomplishment.