David Brooks: Oh How I Love a Crossover Episode 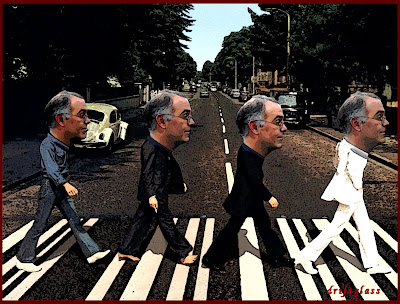 Mark as the day that ambulatory bile duct Glenn Greenwald (who knows shit-all about what is or is not going on outside his hermetically sealed bubble of petulant self-regard) found common ground with David Brooks (who has been more catastrophically wrong about more things more often than just about anyone I can think of.)


I've long thought David Brooks is one of the worst, most banal op-ed writers in the US, but his point here is correct: in the internet age, "virtue" & "compassion" are measured not by one's acts in life, but by cheap & empty expressions of online rage https://t.co/y8FR0wKgnQ pic.twitter.com/dLxsOh7RuP
— Glenn Greenwald (@ggreenwald) November 27, 2018

Also kudos to the merry prankster at some "elite academy" somewhere who taught Mr. Brooks (who has been a dyspeptic, social-climbing fogey since he was five) that "cultural marxism" is a thing he could say with his mouth which would make him seem "hip" and "cool" and "with it" (from The New York Times with emphasis added) --

...
Two great belief systems are clashing here. The older liberals tend to be individualistic and meritocratic. A citizen’s job is to be activist, compassionate and egalitarian. Boomers generally think they earned their success through effort and talent.

The younger militants tend to have been influenced by the cultural Marxism that is now the lingua franca in the elite academy...

-- without bothering to understand what the term means or where it comes from.  From Vice:

You might have heard the term thrown around by figureheads of the new radical right. This is what they're talking about and why they're wrong.

On July 22, 2011, in downtown Oslo, the right-wing extremist Anders Behring Breivik—who once gifted his mother a vibrator—detonated a bomb outside the prime minister's office, killing eight. He then drove 25 miles to Utøya island, where the ruling Labour Party's youth rally was being held, and began an hour-long shooting spree that ended with 69 more dead, most of them teenagers. That morning he had electronically distributed a 1,520-page tract, 2083: A European Declaration of Independence, decrying the "rise of cultural Marxism/multiculturalism in the West." Later, he said the massacre had been a way of publicizing his manifesto.

The trope of "cultural Marxism" has been steadily gaining traction among the broad and diverse entity that is the radical right (although, hating diversity, would baulk at you saying so), where it serves as an umbrella term variously responsible for such un-American and anti-Western ills as atheism, secularism, political correctness, gay rights, sexual liberation, feminism, affirmative action, liberalism, socialism, anarchism, and, above all, multiculturalism. The ultimate goal of cultural Marxism, we're led to believe, is to slowly and stealthily dilute and subvert white, Christian Western culture, thereby opening sovereign nations to rule by a one-world corporate government. Whether that's by Jews, lizards, or communists isn't always clear...

And given that this level of absolute fucked-in-the-head cluelessness is the baseline at which he operates, I can hardly wait for an upcoming column in which Mr. Brooks exuberantly addresses Clarence Page as "my n*gger" because someone in the Acela Corridor quiet car told him that is definitely what the kids do these days.

And speaking of the kids these days...

You see, Mr. Brooks has a long and disturbing history of concocting imaginary trends among the youth and fleshing them out with whatever noxious obsessions are currently colonizing his nightmares.

For example, years ago during his high cotton days at The Weekly Standard when Bloody Bill Kristol  was paying him to pimp the Iraq War and slander us ignorant, hateful Libtards who refused to see the transcendent wisdom of George W. Bush, the child of Mr. Brooks' imagination was named -- no kidding -- Joey Tabula Rasa.   And this point I'm just going to lift part of something I wrote a couple of years ago and drop it here because I'm very lazy and sleepy from Thanksgiving leftovers I can't improve upon it.

And who is Joey Tabula Rasa?

Joey doesn't know much about history; he was born in 1983 and was only 6 when the Berlin Wall fell. He really has no firm idea of what labels like liberal and conservative mean. But now he is in college, and he's been glued to the cable coverage of the war and is ready to form some opinions. Over the past months, certain facts and characters have entered his consciousness, like characters in a play he is seeing for the first time.

The first character is America itself. He sees that his country is an incredibly effective colossus that can drop bombs onto pinpoints, destroy enemies that aren't even aware they are under attack. He sees a ruling establishment that can conduct wars with incredible competence and skill. He sees a federal government that can perform its primary task--protecting the American people--magnificently.

The American system of government, moreover, is clearly the best system. In Joey's eyes, the United Nations is a fractious debating society. The European Union is split. The French are insufferable, the Germans both hostile and pacifist. The Arab ruling class is treacherous...

In Joey's eyes, the people who get to do the most exciting things are not members of the meritocratic elite--Harvard and Stanford alums who start software companies. They are the regular men and women of the armed forces, or, as he remembers from the days after 9/11, they are firemen and cops. They are people without prestigious degrees and high income prospects.
...

Joey likes to think of himself as fundamentally independent. He looks at the people living in their dream palaces--the Arabists, the European elites, the Bush haters--and he knows he doesn't want to be like them. He doesn't want to be so zealous and detached from reality...

Joey isn't one of a kind. There are millions of Joeys, and variations on Joey. Inevitably, then, in ways subtle and profound, the events of the past month will shape our politics for the rest of our lives.

Yes, back in 2003 -- at the peak of the Iraq War propaganda war, with his career firing on all cylinders -- Mr. Brooks confidently predicted that, based on the slow awakening of Joey Tabula Rasa's political consciousness. the very meaning of "progressive" and "conservative" would radically realign based entirely on the degree of support for George Bush's Awesome Iraqi Adventure.  It would be a change so tectonic that leaders of the new "progressive" movement will --

-- and leaders in the new "conservative" movement will include:

There would also be a third group -- the "marchers" -- which would slowly fade into irreverence.

And who's the leader of this club that's made for you and me?

And what does Joey Tabula Rasa thinks of the marchers?

That the're kinda anarchic and weird, just like they were in the 60s!

The final group Joey sees on the political landscape are the marchers. These people are always in the streets with their banners and puppets. They march against the IMF and World Bank one day, and against whatever war happens to be going on the next. Joey is not sure what these people are for. They don't seem to have any alternative to globalization. They don't seem to know how to deal with the Taliban or Saddam. They just march against. Joey figures it must be part of their personality.

Joey knows that this is what people did in the 1960s, and he regards the marchers as vaguely archaic. He knows that they tend to come from Hollywood and academia. Joey is not hostile to those worlds. He loves movies and likes many of his professors. He just senses that they are cloistered worlds, removed from day-to-day reality, and he doesn't plan on spending his life there. Marching for peace is something people in those worlds do...


And now, 15 years and a thousand failures later, and we find the Sage of the Acela Corridor still revered by his Beltway tribe and still prospering from plying the same old trade: spinning and selling the fairy tales his tribe wants to hear as if they were holy writ.

Except now Mr. Brooks confident prediction of an uninterrupted march towards America Greatness under the steady, clear-eyed guidance of  Paul Wolfowitz, Joseph Lieberman, John McCain, Charles Krauthammer, the staff of Fox News and George Bush has collapsed into the rubble and ruin of a post Great Recession America galloping into the fascist abyss led by Mr. Brooks' Republican Party, the staff of Fox News, the evangelical Right and Hate Radio.

Except now that the youth of America are faced with having to make a future for themselves by picking their way though the rubble and ruin that men like David Brooks have left in their wake -- now they are turning away from the empty promises and moralizing drivel from men like David Brooks Brooks -- the Fictional Young Person of Mr. Brooks' imagination is no longer humble, silent, patriotic Joey Tabula Rasa...


The managers at these places, who are generally 35 and above, are liberals. They vote Democratic and cheer on all the proper causes of the left. But some of the people under 35 are not liberals, but rather are militant progressives. The older people in the organization often have nicknames for the younger set: the Resistance, Al Jazeera, the revolutionaries. The young militants are the ones who stage the protests if someone does something deemed wrong.

And finally, some of you might remember just a week ago when I noted that while the whole "Campus Speech Code Thugs!"scam which is regularly deployed by the Usual Beltway Drudges to diffuse the corruption and sedition of the Republican party into a fine mist of "Both Sides Are Equally Bad" seemed to have dried up and blown away under the 1,000 decibel barrage of lies, racism and madness from 1600 Pennsylvania Avenue...

...that you shouldn't worry because that straw man would definitely be refurbished and brought back soon?


"Well, I don’t have a machine for peering into the souls of Obama’s critics, so I can’t measure how much racism is in there. But my impression is that race is largely beside the point."  -- David Brooks, 09/17/09.

Which means that if we ever started actually holding powerful people accountable for what they have said and done, there is a very good chance that Mr. Brooks would be the first one in the tumbrel.

I'm not convinced David Brooks and Gleen Greenwald are even sentient anymore. Years of banal lying will do that.

I wonder if they avoid mirrors in their homes, lest they attack themselves.

For an even better look at the roots of the "Cultural Marxism" trope, see
https://rationalwiki.org/wiki/Cultural_Marxism

"Ambulatory bile duct". Yet another DG-ism I seek to adopt.