But You Already Know The Punchline 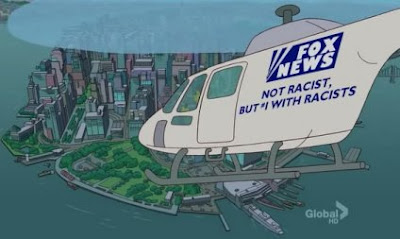 Thanks to Alert Reader "GR" for calling my attention to this short tale of woe and revelation that ends exactly where every reader of this blog knows it must end.


Still, the journey is half the fun, eh?

I know, I know.  You're already there.

A young Republican activist from Northern Virginia who was seen as a potential rising star quit the party Tuesday, citing President Trump’s “appalling comments” about Haitian immigrants and what he called a nativist streak in his home state.


Kyle McDaniel, 28, served on the party’s state central committee for two years and has worked as a top aide for Fairfax County Supervisor Pat Herrity (R-Springfield), who said he had hoped McDaniel would eventually run for public office.


But McDaniel said he harbored increasing reservations over where the party has been heading. On Tuesday, he sent a letter of resignation to state party chairman John Whitbeck that described events he “could no longer stomach"...

“I have, on more occasions than I care to recall, been forced to ‘bite my tongue’ when in conversation with other party leaders about the issues of the day,” wrote McDaniel, who has gone to Haiti as a relief worker with his church and said he and his wife, Katie, have considered adopting a Haitian child. “I cannot in good faith continue to do that.”

John Whitbeck, chairman of the state party, said McDaniel “knows full well that the Republican Party of Virginia, and I as chairman, have worked tirelessly to expand the Party into new communities.”

“We wish Mr. McDaniel the best in his future endeavors but he owes every member of his party an apology for repeating the Democrat talking points that Republicans are a bunch of racists,” Whitbeck said in a statement.


Herrity said he hoped McDaniel will someday return to the Republican fold. “I still think he will run for office one day,” he said. “I would hazard to predict he’ll do it as a Republican.”

Wait for it, and it's "Democratic" you lumpen Limbaugh meathead...

McDaniel, who works as a real estate agent in Alexandria, said that isn’t likely. “I’m totally out,” he said. “I’ll support candidates I agree with, but as far as any party affiliation, I’m out. I’m independent.”

You know, I'm glad this young man got off the Klan Wagon, but I also know damn well he'd still be a ride-or-die Republican if President Shithole had enacted the same monstrous policies and appointed the same shitty people but thing but with a Marco Rubio smirk on his face and an affable, Beltway-friendly Both Sides Do It answer ready every time his party committed another atrocity.

If only he hadn't said the quiet part out loud.

Since Mr. McDaniel didn't quit over everything else including Bunch-of-Murders-And-Rapists, Sheriff Joe Pardon, Each travel ban, anytime Stephen Miller opens his mouth, Fire-Those-Kneeling-Bastards,and Many-Fine-People forgive me if I look askance at his story.

A) his real estate business was based on using his Party position to make money find fellow Wingnuts housing in Northern Virginia. Now because President Stupid's brand is getting toxic, he needs to rebrand himself because...money!

B) he believes EVERYTHING a typical conservative believes about race; however, like those same conservatives, one life experience he had has him carving out a silver as his own personal Good Ones.

Kyle McDaniel, 28, served on the party’s state central committee for two years and has worked as a top aide for Fairfax County Supervisor Pat Herrity (R-Springfield), who said he had hoped McDaniel would eventually run for public office.

It took McDaniel until NOW - and Trump's shithole comment - to make him Quit the R Party?? Shithole was his Road to Damascus moment? Before he was (deliberately) blind, but NOW he "sees"?

Agree with trgahan, above. This shithole only had his Road to Damascus moment because of Money and nothing else. No doubt McDaniel loved him some Trump until he realized that the Shithole in the White House might cause some financial downfall for McDaniel.

Meh. Just another Charlie Sykes wannabe only worse bc Sykes at least was ahead of curve in jumping on the anti-Shithole band wagon... but of course ONLY in order to enhance his (Sykes') own personal financial gain.

All of these newly hatched Never Trumpers are cowards, frankly. They actually secretly LOVE what Trump is saying and doing, but they're afraid they'll lose money. Sell Outs of their true beliefs and values, one & all.

Everybody here know the definition of "an independent"?
A conservative with a sense of shame?

"I’ll support candidates I agree with, and they'll just happen to be republicans 98% of the time for the rest of my life, but i'm not a republican."

"A conservative with a sense of shame?"
Or a contravening financial interest.
And Whitebeck? Really? Like Beck, only whiter?
Oh, Whitbeck, never mind.

Sure, and Rupert Murdoch's wife goes on the wagon from being a Chinese interest influence peddler.

But riddle me this,
How does your republican of redemption differ from Susan Sarandon?

All of these newly hatched Never Trumpers are cowards, frankly.

As Brother Charles said the other day, you can't honestly call yourself #NeverTrump unless you're also #NeverMcConnell and #NeverRyan and, in general, #NeverGOP as currently constituted.

How does your republican of redemption differ from Susan Sarandon?

excellence in solving the riddle.

You sir, are truly a caped crusader.

I only say this because I am of nominal means and have no monetary prize to award. I hope a well done can suffice.

Between Trump and his #foreverTrump clan.
They need to be more transparent and explanatory of their directions).

Do I start learning the Russian language?

Do I take classes on speaking in tongues?

Or to I learn how to cross talk between the Bubba and NAZI language to survive in their future (until the rapture).

I wonder how the forgotten coal miners are dealing with this delema?

Is there an LD-50 for tongue-biting?
Sadly, no.