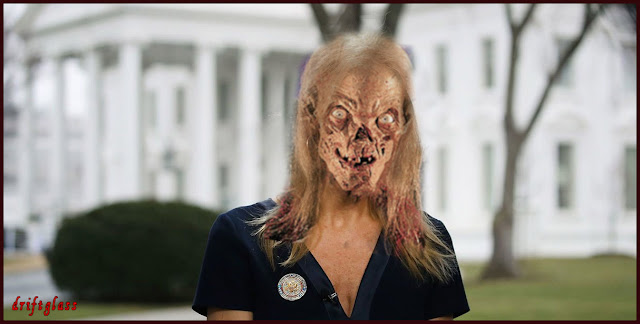 Kellyanne "Cash Up Front" Conway knows that when The Bastard President says "jump" her job is to say "On whose neck?"

Kellyanne Conway Explains Why Trump Staffers Are the Real Victims
The trials and tribulations of authoritarian governance.

Kellyanne Conway, who has some sort of position with the new administration and who never has drawn a breath in American politics with which she hasn't cheapened it, went on with Chris Wallace on Fox News on Sunday and…Well, I don't know what happened, but the radio went and got stuck on scan. Wallace sat back, perhaps stunned into silence. We may never know. But this monologue ensued.

...
This has all been a colossus failure, and nobody wants to talk about that. They want to talk about it's always zing. It's always playing gotcha. There's no question that when you look at the contributions made by the media, money contributions, they went to Hillary Clinton. We have all the headlines, people should be embarrassed. Not one network person has been let go. Not one silly political analyst and pundit who talked smack all day long about Donald Trump has been let go. They are on panels every Sunday. They're on cable news every day. Who's the first editorial—the first blogger that will be left out that embarrassed his or her outlet? We know all their names...


For the record, I embarrass my outlet every single day, but I don't think The Script Keeper knows my name.
at January 30, 2017

Reminds me of that genius from up north ways... Sarah Palin 2.0?

Is this an episode of Black Sails? Is Kellyanne the reincarnation of John Silver with the LONG memory?

It is what I have been saying: Kellyanne is a victim!

The fact that this PR Medusa is given the slightest benefit of the doubt continually as the MSM chooses to desperately chase Neo-Nazi eyeballs to get some of that sweet sweet Multi-Tier-Marketing ad revenue makes me despair.

Seems like a lot of conservative women flacks and pols are real motormouths: Kellyanne, Princess Dumbass of the Northwoods, Malkin, Coulter, etc. etc.

Pablo in the Gazebo said...

kellyGirl cannot answer the simplest of questions. It isn't her job, I know.

But to have her on the TV to ask her to answer a question we all know she is incapable of. What is the point.
This is like how they continue to stick in our faces Newt'er or the Rudi'est.

If they must have this Zombie Barbie on. Just play the video clips of her speaking on Ted Cruz;s behalf when she worked for him opposing Trump.

And simply ask, do you know this person?

Do you have a problem with this person's anti Trumpisms?

I hear Trump is going to appoint her to Birth certifying by dental records.

She will have to wait for that first tooth like the tooth fairy.

Oh, and what Jimbo said.
I don't know enough psychology (although I can spot psychopaths and narcissistic head cases) to recognize what such a pattern might suggest, but it does suggest something.