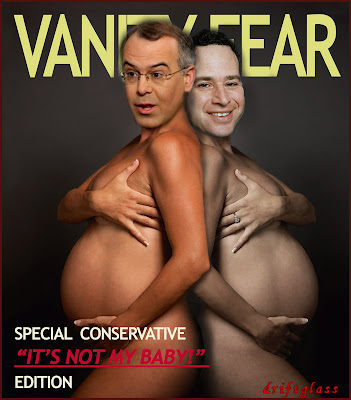 One major reason for the media in this country being dead is that there is no expiration date on the careers of former Bush-regime dead-enders, no matter how repeatedly wrong and ridiculous they are.


From The Atlantic, where Mr. Frum is a senior editor for no explicable reason:

An Immigration Order as Stupid as it Is Counterproductive

So far, so good.  Jebus, driftglass, whaddya gotta go and get all worked up over...

The liberal scorn for nationhood and refusal to adapt immigration policy to changing circumstances enables the rise of extremism in the West.

Oh.  Ok.  Never mind.  So it's the god damn hippies who are to blame for Trump.  Again

And with that, as they used to say in Edinburgh, gardyloooooooo!

...
Trump’s executive order has unleashed chaos, harmed lawful U.S. residents, and alienated potential friends in the Islamic world. Yet without the dreamy liberal refusal to recognize the reality of nationhood, the meaning of citizenship, and the differences between cultures, Trump would never have gained the power to issue that order.


Liberalism and nationhood grew up together in the 19th century, mutually dependent. In the 21st century, they have grown apart—or more exactly, liberalism has recoiled from nationhood. The result has not been to abolish nationality, but to discredit liberalism.


When liberals insist that only fascists will defend borders, then voters will hire fascists to do the job liberals won’t do...

...used in Edinburgh as a warning cry when it was customary to throw slops from the windows into the streets

Yeah, sorry about that export Mr. Glass. But it did make things a little better up here, and we thought he'd hardly be noticed down there.

I'm sure he'll be coming home along with Kevin O'Leary making his own Caligular entrance to head our own once-respectable Conservative movement. Having imported lessons from you good folks, our Hate Machine has almost caught up to the 20-year head start that we gave you.

That is some amazing near-black-hole-gravity-gradient, star mangled distortion. Where is Alexander the Great to solve this Gordian knot of twisted rewriting.
The simple sword? What a load of crap!

I thought it was 60 million US citizens' fault for electing a raging asshole ignoramus!

Or I thought it was the media's fault for peddling toxic bullshit and lies to the imbecilic public for years!

But NOW I see it was all us LIBERALS fault! Oh, well we must be punished then, mustn't we?

(Remind you of this bit from Basil Fawlty?)

Nationhood? I was hoping my nation would take off the hood and look around a little...

But I LIKE "Sometimes When We Touch." (Dan Hill/Rique Franks duet-version)

wasit LIBERALS who didn't believe in national sovereignty and INVADED another country for FUCK-ALL reasons or was it his BOSS?

Frum is one of those that only admitted to Reagan leg humping after Clinton was elected.
He hasn't quite admitted to voting and supporting the Bush. Cheney disaster.

He has much to criticize of Obama. Frum is trying to avoid getting any Trump goo on him.

His ideology reeks of I am not that kind of Republican/ conservative.

I am different and better and more responsible. Not like those other republicans.

David Frum as a young girl who you got a couple of drinks in would put out like a hooker on a free trial offer.
He does want you to know, :he is not that kind of girl".

Saskatchewan's working on a Neil Young Cyborg Conversion Project to make up for that.