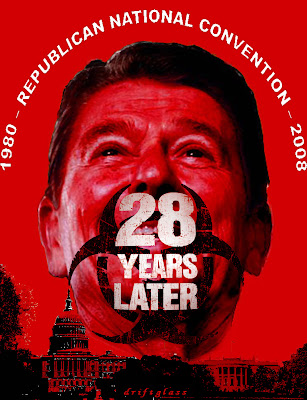 “I didn't have cancer. I had something inside me that had cancer in it and it was removed."

Of all the toxic brainworms Ronald Reagan passed down to his acolytes and imitators, almost none has proven more ineradicable and ruinous than his pathologically dissociative behavior when confronted with any information that threatened to impede his world-view.  Only when threatened with the loss of his presidency was he ever forced to concede -- in the most dysfunctional, denialist language available -- that he might have done something wrong

"[Regarding the Iran/Contra treason] My heart and my best intentions still tell me that's true, but the facts and evidence tell me it is not."

If you'd like to read more about it. the inimitable Rick Perlstein has written several hundred scintillating pages on the subject.

Today, virtually every Conservative carries this ideological retrovirus in its most lethal, full-blown, late-stage form.  As I wrote back in 2008:


It Is Now 28 Years Later
and the Conservative Hate Virus that hijacked
a political party,
a religion,
and the national media
and turned them into disease vectors
still rages merrily along.

The Conservatism Retrovirus left us open to infection from a whole suite of opportunistic wingnut disease, and from Falwell to Limbaugh to Beck, Conservatism has permitted each of them and all of their mutant imitators to breeze past democracy's natural antibodies -- an educated electorate, an honest press, a respectful politics -- and settle in for a nice, long parasite feast.

Andrew Breitbart was just such an opportunistic disease: another ratfucking bastard child of Lee Atwater and Roy Cohn who took a sociopath's glee in the wide, pestilential path he carved through America's political media. He destroyed people and pissed on their graves for fun and profit and prospered because he completely understood and embraced what a collection of monsters and meatsticks the Right truly is.

Of the four distinct characteristics which the Conservative Retrovirus always presents, characteristic number three  -- "Depends for ideological and political cohesion on a massive, ongoing and self-reinforcing regime of historical revisionism and "doublethink" -- always shows up with a couple of interrelated symptoms:  Strategic Forgettery (the past simply never happened. Example: The Great Project of David Brooks) and Republican Detachment Disorder (even if the past did happen, I had nothing to do with it.  Example:  Reliable Beltway stalactite Michael Gerson),

And now, with the Rise of Trump, we begin to see what happens when those incurably carriers of the Conservative Retrovirus -- 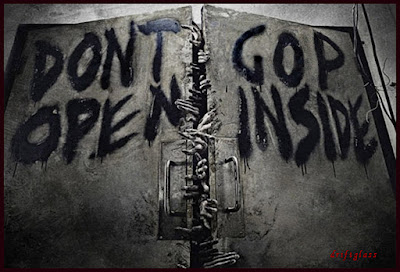 -- begin to turn on each other.

Like just this morning, on Morning Joe (h/t Blue Gal at Crooks & Liars)  where we find the remnants of the GOP Donner Party squabbling bitterly over whose turn it is to wash the dishes and bury the bones (emphasis added to more easily guide your eye to the hilarity):

JOE SCARBOROUGH:  Bill Kristol, it's all about changing the dynamics. Did anything happen last night that would have made anybody change their mind and go back to Donald Trump?

BILL KRISTOL:  No, but I think something happened that would make some people leave Donald Trump. I don't like -- yes, on style points style was a little better in the first 30 minutes and he had a couple clever insults but that's not the point. The headline out of this debate is obviously the failure to say ahead of time that you will accept the results of the democratic election in America. Pretty unprecedented. Doesn't mean that there's going to be violence in the streets, certainly not if others now say who cares what Donald Trump says. --

BILL KRISTOL:  -- He's going to be a failed fluke presidential candidate and he should be ignored on election night and Republicans need so say that.

KRISTOL:  Yes. He won the nomination in a flukey way.

BREZINSKI:  Your people nominated him. That's not a fluke.

BREZINSKI:  He beat 16 people! The Republican Party nominated him!

KRISTOL:  I agree!  Some Republicans refuse to support him and he's going to lose the general election.

BREZINSKI:  It's not a fluke.

KRISTOL:   I think it was a fluke in some ways. And in other ways he tapped into some deep anxieties...

BREZINSKI:  A fluke is something no one expected.

KRISTOL:  Okay, fine!  The Republican Party -- does that make you feel better about it?

KRISTOL:  You feel great because the Republican Party nominated a guy who is really a bad guy as President and you think it's funny and amusing.

Man, Kristol is quite the bilious little viper once you smack that death's-head smirk off his face:

BREZINSKI:  No, I actually think Republicans need to come clean on themselves.

KRISTOL:  What is come clean on themselves?

BREZINSKI:  Just be honest about what's right and wrong.

KRISTOL:  Are you going to pretend that?

BREZINSKI:   Joe hung up on him when he wouldn't answer a question. Do you mean when we peppered him --

KRISTOL:  A lot of people accommodated Donald Trump at different times. I'm not going to get into it.

SCARBOROUGH:  You just did! You lied!  Please don't come on my air and lie. You said in late '15 early December --  I can't even believe you are doing this, I don't know why you are so bitter

And now that his precious delusions are being threatened from inside his own perimeter, it's time for Joe Scarborough's barely sublimated inner meathead thug fratboy to roaring come out:

KRISTOL:  I'm not bitter. I'm trying to say that Republicans --

KRISTOL:   I am upset about this election.

SCARBOROUGH:  Really. He called in, is that right?

BREZINSKI:  We treated him tough.

KRISTOL:  You asked the most tough questions?

KRISTOL:  We don't need to get into this.

SCARBOROUGH:  It's too late. You're bitter -- you come on here practically crying, we have it on tape, you're screaming at Mika. You don't even know what she's going to say, which is the same thing you're going to say.

Quick, shift the focus away!  Onto those bad Republicans.  The ones waaay over there.  And cue the ham-handed pivot back to Republican Detachment Disorder in 3...2...1...

SCARBOROUGH:  Why is Paul Ryan?!? why are Mitch McConnell?!?

KRISTOL:  That's what I was going to say.

SCARBOROUGH:  That's what Mika was going to say.

KRISTOL:  Well, then, we are in agreement.

SCARBOROUGH:  Well then, don't attack us!

KRISTOL:  I'm not attacking you guys!

SCARBOROUGH:  The question is, Why is Paul Ryan still endorsing, why does Mitch McConnell still endorse him. By the way, while you are attacking me personally, I said from the beginning I would never vote for him.

BREZINSKI:  Sorry if we were easy on him.

KRISTOL:  Good on you. If you behaved in a great way more power to you.

SCARBOROUGH We did. If you want to answer the question now -- let's start with Paul Ryan because we've been asking that question --

KRISTOL:  He should say he does not support Donald Trump. Every Republican...

SCARBOROUGH:  And what if he doesn't?

BREZINSKI:  It's not a fluke.

KRISTOL:  What does that mean, "it's not a fluke."

SCARBOROUGH:  What it means is the most powerful Republicans in America are still endorsing him.

SCARBOROUGH:  Is Paul Ryan is legitimate contender for President in 2020 if he does not withdraw his endorsement of Donald Trump?

KRISTOL:  That's honestly hard to say. I would have trouble supporting somebody in 2020 that has rationalized Trump. Now Ryan has gone pretty far in distancing himself from Trump, to be fair, compared to others.

SCARBOROUGH:  What about Mike Pence? Is Mike Pence disqualifying?

BREZINSKI:  He didn't say he was going to do that --

KRISTOL:  The key is to ignore him.

BREZINSKI:  He didn't say he was going to do that --

KRISTOL:  He was going to leave it up in the air. What, he going to wait and see?

KRISTOL:  You can challenge elections -- I mean --

KRISTOL:  You do it by the rules.  You challenge the rules. Adrian Gonzales was probably safe at home plate in the second inning last night, there is a photo showing that and he is complaining about that but the Dodgers accepted the result of the game and ahead of time they said they would accept the results of the game. ...

SCARBOROUGH:  As will everybody else...

To misquote that president everyone agreed to forget about, "Rarely is the question asked: Is our pundits learning?"

The answer is "Oh hell no".


But even more rarely is the question asked: Why are these lying, Conservative Retrovirus-riddled hobgoblins on teevee at all?

Great question!   Perhaps you'd like to contribute to the race for the cure?

Wow, just wow! I don't watch The Squint and Meat Puppet Show so missed this hilarious conversation. Sounds like it was even better than Rove having his denial fit on Election Night in 2012. Polls are skewed!!! I imagine there will be other "Lord of the Flies" moments over the next 3 weeks or so. Kristol is so pathetic.

"But even more rarely is the question asked: Why are these lying, Conservative Retrovirus-riddled hobgoblins on teevee at all?"

The doofusgentsia in this country LOOOVVEE to watch these two idiot tell them how awesome the ruinous goblins we elect actually are - They're GREAT!! So kind and calm/cool/colllected, like Kellyanne Conway. She's such a nice person! And that totally makes up for the certifiable evil she commits every time she's on TV justifying that orange-coiffed corpse-puppet running for President.

The lumpen proletariat like their political TV just the way it is - totally divorced from reality.

SO these two will have a long and glorious career together on your TV for the rest of their natural lives, or at least until their numbers fall.

It's all about the dough-re-me, and it always will be. Corporate don't give a rat's ass about integrity, honesty, justice, or honor. They care about ratings and cash.

Are you crying, Butcher Bill? There's NO crying in Trump-Ball! 😭

"Trump was a fluke and the ONLY reason Republicans don't control all levels of government right now. No need for reform, proceed on current course cause the American People (TM) love us."

Always wrong Bill Kristol, Squint & Meat Puppet are all part of the brigade who lovingly facilitated & encouraged the growth of the basket of deplorables. They are CEOs of the deplorables. Fuck 'em. They must believe that no one remembers how greatly & deeply they kissed Trumps ass & how much free fawning air time they gave him. Fuck 'em. Bastards. Ghouls. Unpatriotic shitheads.

Speaking of MSNBC, Jon Lovett just went full Driftglass on Chris Hayes' show, down to calling out the producers of cable news shows.

Mika actually slapped the perma-smirk off Kristol's face for a moment!

After reading this beautiful post, I have a serious question. Is it possible to die from schadenfreude?

In the NFL, when you lose, the coach goes on TV and says something like,"We didn't adjust our fundamentals but we're confident that the guys get it and once we review the tape this week, we'll be fixing those problems before we meet the XXX's in YYYtown." The QB would then say, "I missed some plays. The other guys were great but we have to execute better."

In Conservative Land, the coach says, "We didn't lose. That wasn't our team. Some other team showed up and played. We would never field a team like that." And the candidate says, "The game was rigged. I was great but the coach, my teammates, the press and the fans are all terrible, just terrible."