With Marco Rubio and The Smarmy of Northern Virginia at Appomattox 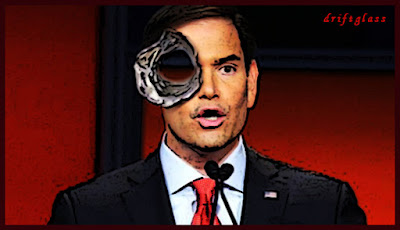 The sign outside the fictional Alexandria Safe Zone reads:

"Mercy for the lost. Vengeance for the plunderers."

Because other than a plurality of Michele Bachmann zombies who gathered in Minnesota church basements and high school auditoria to hand him a tiny, irrelevant win last night, Young Macro Marco, found cold streets and closed doors almost everyplace outside of the suburbs of northern Virginia:


The Associated Press called the state for Trump at 8:53 p.m. Eastern.


Though pre-primary polling had given Trump a wide lead over the GOP field, early exit polling showed Rubio within striking distance in the Old Dominion — raising the prospect that the establishment-oriented Republican would upset Trump to score his first-ever victory in a nominating contest.


But while Rubio trounced Trump in the affluent, highly educated Northern Virginia suburbs, it wasn't enough to overcome Trump's strength in more conservative and rural areas...

So why this particular anomaly?  This glitch in these particular suburbs?  Because as Mr. Chris Hayes shrewdly noted last night, it's where the fucking lobbyists live! It's the motherland of Washington's professional consultants, campaign advisers, defense contractors, media goofs, think tankers and a dozen other species of paid fixers. It's the gated nation-state of that "political establishment" you may have read about in the funny papers -- the people who have bet it all on Young Macro's Marco and have been desperately patching and upgrading his defective software from Day One.

And as long as Young Macro Marco can continue to live rent-free on top of their mountain of fear sweat and money he can go on right on getting his ass handed to him and calling it a Big Win, regardless of the fact that his chances of winning the nomination is becoming statistically indistinguishable from Ben Carson's.  Which is why I found it especially delicious that, buoyed by the dough and desperation of a dying establishment, Young Macro Marco would deliver a "victory" speech so similar in megalomaniac denialism to Jefferson Davis' final address "To the People of the Confederate States of America" that on a cloudy day, if you squint, you can hardly tell the difference.

...We have now entered upon a new phase of a struggle the memory of which is to endure for all ages and to shed an increasing luster upon our country.

Relieved from the necessity of guarding cities and particular points, important but not vital to our defense, with an army free to move from point to point and strike in detail the detachments and garrisons of the enemy, operating on the interior of our own country, where supplies are more accessible, and where the foe will be far removed from his own base and cut off from all succor in case of reverse, nothing is now needed to render our triumph certain but the exhibition of our own unquenchable resolve. Let us but will it, and we are free; and who, in the light of the past, dare doubt your purpose in the future?
...

Shine on you crazy diamonds!

Email ThisBlogThis!Share to TwitterShare to FacebookShare to Pinterest
Labels: 2016 election

Used to live there and you could not be more right.
Northern Virginia in the last 20 years or so has become a vast sea of McMansions inhabited by the grifters working the government contract scams set up by Cheney and Rumsfeld. In case you were wondering where all that Defense Department gelt goes.

A great example of how the current Republican primary fight has little to do with political ideology; nothing to do with policy; and EVERTYHING to do with right wing beltway power structures.

Trump means utter disruption to these people's means of making a living. In Trump there is a potential for power reshuffle in the beltway likely not seen in decades and many of the northern "Virginians" will likely get left out as their rolodex's quickly loss relevance. Hence the growing number of media/pundits suddenly warming to Trump.

Should Trump win, historians may dub this election as the "The Great Snap" referring to the sound of the pocketbooks of the right wing oligarchy when they realize they no longer need "Both sider" media apologists, "inside voice" pundits, policy think tanks, representatives turned lobbyist, etc.

All that will be needed is a revolving door of cheaper, desperate, right wing hacks willing to stare at a TV camera and yell the N-word for a mortgage payment.

Best analysis I've found of what the whole Trump business is about. There's a very high correlation with "authoritarian personality" .

If these guys are right (and they're academics who were startled to see how exactly their research fit the whole Trump thing), post-election (which Trump doesn't win), we're looking at three political parties - Democrats, establishment GOP, and the authoritarian GOP. The GOP won't be able to take the White House for a long time, if ever, due to the splintering. But you can look forward to a lot of mini-Trumps in local and Congressional elections.
If you read the article, scroll down to Feldman's 4 Question test to identify authoritarian personalities. May be some among your friends and acquaintances.

The republican virtue of religious presidential stature.
When facing an opponent like Tumpf (we know what the "F: stands for)'

"Have you seen Donald Trump's hands? They are small. He has small fingers, and you know what they say about men with small fingers".
Marco Rubio

Take it from the beginning. The GOP base did not want McCain but wanted to look up his VP's dress.
They lied to them that the Mormon Mittance would jackboot the uppity president.
They then shoved another Bush at them. But they want the 3nd coming of Saint Reagan only in the terms of end times for everyone but themselves.

" I will turn the sands of ISIS into glass"
REd Cruz
How presidential is that? most of the area ISIS is in there is no sand.

The Government contractors bidding process for GOP candidates is way out of hand.

It's hard to imagine why the Michelle Bachmann crowd would pick Marco Rubio over the Anointed One, Ted Cruz. The messenger sent from God to save America.

In fact - I am sure that Michele Bachmann and here people would support the anointed one. Something else must have happened in those church basements last night. Use your imagination, people.

I tried, I really did
Those images will really be hard to get rid of. I'm going to have a large Scotch.