The Fall of the House of Bircher 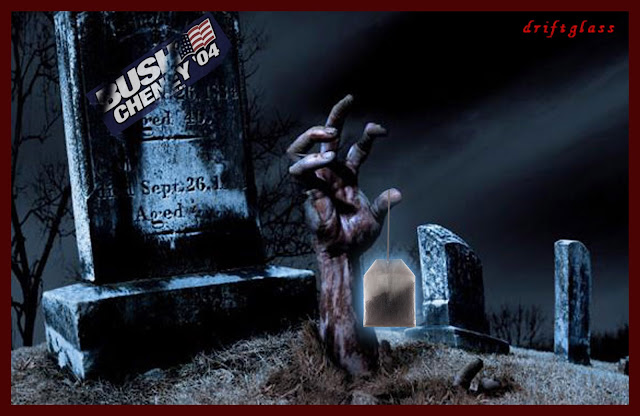 I wrote this three years ago, back when pointing out that the Republican Party was a mob of bigoted lunatics was still the lonely, career-killing province of disreputable Liberals and not this week's New!And!Daring!Insight! by the Beltway's professional pundits class.

And based on the results of tonight's Republican primary elections, I see no reason to revise a single syllable of it:


The Fall of the House of Bircher

"To a new world of blogs and monsters!"

-- "The Bride of Frankenstein", slightly upgraded

A long assembly-line of Conservative miners, smelters, cutters, assemblers, welders and polishers stretching back through Fox and Rove and Bush, through Falwell and Weyrich, through Atwater and Limbaugh, through Reagan and Nixon, though Wallace and Thurmond...all playing with the awful tools of paranoia, rage, white supremacy and faith...all scavenging the barking mad remnants of the Confederacy and the Jesusland dreams of Christopaths to forge for themselves a mighty machine.

A mighty, angry, crazy, bigoted reactionary electoral beast fed on drivel and dung and led by the nose from cause to cause and candidate to candidate, getting a stronger and wilder and more anxious to spit out the bit and run amok every day.

They were warned --  by Liberals -- as far back as the 1960s that they were tampering with terrible forces (from me, five years ago):

From Rod Serling writing in an editorial in the (then very right-wing) Los Angeles Times in 1964, in response to a series of articles by wingnut-apologist Morrie Ryskind:

…
What Mr. Ryskind seems constitutionally unable to understand is that there is a vast difference between the criticism of a man or a party, and the setting up of criteria or patriotism which equates differences of opinion with disloyalty.

We have need in the country for an enlightened, watchful and articulate opposition. We have no need for semi-secret societies who are absolutist, dictatorial, and would substitute for a rule of law and reason an indiscriminate assault on the institutions of this republic that should and must be held sacrosanct.
…

“[The far right cannot] discount the fact that sitting it their parlor is the Ku Klux Klan, the American Nazi Party, every racist group in the United States and not a few of some Fascist orders that have scrambled their way up from the sewers to a position of new respectability.”

Modern Conservatism was born steeped in original, bigoted sin ever since Lyndon Johnson and the 1964 Civil Rights Act --

In conjunction with the civil rights movement, Johnson overcame southern resistance and convinced Congress to pass the Civil Rights Act of 1964, which outlawed most forms of racial segregation. Johnson signed it into law on July 2, 1964. Legend has it that, as he put down his pen, Johnson told an aide, "We have lost the South for a generation," anticipating a coming backlash from Southern whites against Johnson's Democratic Party.

-- and the rise of the Southern Strategy --

From now on, the Republicans are never going to get more than 10 to 20 percent of the Negro vote and they don't need any more than that... but Republicans would be shortsighted if they weakened enforcement of the Voting Rights Act. The more Negroes who register as Democrats in the South, the sooner the Negrophobe whites will quit the Democrats and become Republicans. That's where the votes are. Without that prodding from the blacks, the whites will backslide into their old comfortable arrangement with the local Democrats.

-- and has been sliding deeper into the septic tank ever since.

They were warned, but they did it anyway.  Kept mollifying thugs.  Kept flattering bigots.  Kept slaughtering science to appease the theocrats and the garden-variety stoopid.  Kept whispering to the stone crazy that their paranoia was patriotic.  And, of course, kept on dehumanizing and demonizing patriotic, reality-based Liberals who were trying their damnedest to keep their Pretty Hate Machine from rolling back the whole Enlightenment.
Kept doing it all -- louder and louder and louder -- long after it was clear that their cause was a catastrophe and their followers were insane.


And now, once again, they want to bury the evidence of their crime: hammer the monster they created into a sarcophagus and hope to Heaven that their enablers in the Beltway Media can once again be relied on to cover their tracks.


Except for two generations their Grand Batshit Strategy hinged entirely on encouraging their Uruk-hai to be loud and proud about their ignorance, their casual racism, their screeching aggrieved rage and their myriad hilarious derangements.

And however hard the Conservative Money Caste tries to bury their bastards under a million yards of sweet, amnesiac dirt, they ain't going back into the cold, cold ground:


To say that [professional radio hatemonger] Mark Levin is unimpressed with Karl Rove’s latest project would be an understatement. Levin kicked off the broadcasting week by issuing a clarion call to his listeners (FREE audio): “Who the hell died and made Karl Rove queen for the day? And his sidekick, Steven Law, with their disastrous records?

“These people need a hard, swift kick in the a– off the public stage,” Levin concluded.
...

Instead... (from Edgar Allan Poe):

...
No sooner had these syllables passed my lips, than—as if a shield of brass had indeed, at the moment, fallen heavily upon a floor of silver—I became aware of a distinct, hollow, metallic and clangorous, yet apparently muffled reverberation. Completely unnerved, I leaped to my feet; but the measured rocking movement of Usher was undisturbed. I rushed to the chair in which he sat. His eyes were bent fixedly before him, and throughout his whole countenance there reigned a stony rigidity. But, as I placed my hand upon his shoulder, there came a strong shudder over his whole person; a sickly smile quivered about his lips; and I saw that he spoke in a low, hurried, and gibbering murmur, as if unconscious of my presence. Bending closely over him, I at length drank in the hideous import of his words.

“Not hear it?—yes, I hear it, and have heard it. Long—long—long—many minutes, many hours, many days, have I heard it—yet I dared not—oh, pity me, miserable wretch that I am!—I dared not—I dared not speak! We have put her living in the tomb! Said I not that my senses were acute? I now tell you that I heard her first feeble movements in the hollow coffin. I heard them—many, many days ago—yet I dared not—1 dared not speak! And now—to-night—Ethelred—ha! ha!—the breaking of the hermit’s door, and the death-cry of the dragon, and the clangor of the shield!—say, rather, the rending of her coffin, and the grating of the iron hinges of her prison, and her struggles within the coppered archway of the vault! Oh, whither shall I fly? Will she not be here anon? Is she not hurrying to upbraid me for my haste? Have I not heard her footstep on the stair? Do I not distinguish that heavy and horrible beating of her heart? Madman!”—here he sprang furiously to his feet, and shrieked out his syllables, as if in the effort he were giving up his soul—“Madman! I tell you that she now stands without the door!”

As if in the superhuman energy of his utterance there had been found the potency of a spell—the huge antique panels to which the speaker pointed threw slowly back, upon the instant, their ponderous and ebony jaws. It was the work of the rushing gust—but then without those doors there did stand the lofty and enshrouded figure of the lady Madeline of Usher. There was blood upon her white robes, and the evidence of some bitter struggle upon every portion of her emaciated frame. For a moment she remained trembling and reeling to and fro upon the threshold—then, with a low, moaning cry, fell heavily inward upon the person of her brother, and in her violent and now final death-agonies, bore him to the floor a corpse, and a victim to the terrors he had anticipated.
...


We told them not to, over and over again, but they did it anyway.

Email ThisBlogThis!Share to TwitterShare to FacebookShare to Pinterest
Labels: 2016 election

Reading this sparked a memory recall.

"For fanaticism and ignorance is forever busy and needs feeding"

Courtroom confrontation Between defense lawyer (Spencer Tracy) and the Judge.

From the movie classic, Inherit the wind

We told them not to, over and over again, but they did it anyway.

{/shrugs} There was just too much money to made and power and control over tiny little minds to be had, at least in the short term. Human nature will be human nature, won't it?

And every sitting Republican in the House, Senate, and in many states all the way down to dog catcher are shitting themselves this morning because they can no longer deny that the next election cycle for their position, a primary challenger can just run a Trump-style outside voice, fascist campaign that an incumbent will not be able to counter.

The media won't help them because...money. A sitting Republican has been seen as much of a traitor as any liberal to conservative base voter since 2008.

Full panic mode was in evidence last evening on National Propaganda Radio. The stenographers interviewed one person who was on Trump's "team" in some capacity who spoke glowingly of what a fabulous job Trump will do as our next POTUS.

This dude was followed by no less than three detractors of Trump. All of whom went into factual detail - wow wheeeee it took Trump to get us some facts on the radio - about why Trump was a ludicrous candidate who knows bupkiss about how to run this nation. THREE of 'em v one in favor of the dude who swept Super Tuesday.